Member of The Order

Keep Titan as his enforcer.

Kill Titan and Invincible.
Help Set and The Order to dominate the world (all failed).

Machine Head is a supervillain in Image Comics, mainly a minor antagonist in the Invincible comic book series and its animated adaptation. He is a cybernetic crime boss who runs a criminal organization and the L.A. branch of The Order. He's also the archenemy to Titan.

In Capes, while Kid Thor and Bolt were tell each other about their origin story, Machine Head is thrown by Titan and hits their car. Titan grabs him by the throat and tries to kill Machine Head, Bolt and Kid Thor get in his way and defeats him. Titan and Machine Head are taken in to custody.

Titan later teams up with Invincible to take down Machine Head. However, when they arrived in his office they are defeated by Machine Head's hired men - Battle Beast, Magnattack, Kursk, Furnace, Magmaniac, and Tether Tyrant. The Guardians of the Globe arrived and helped defeat Machine Head's enforcers and took them into custody. In later issues, he owns a store and is attacked by two of his former enforcers. Magmaniac uses his lava to blast at Machine Head but instead kills two customers. Machine Head orders Vault onto the duo. Vault discover that Magmaniac's consciousness exist in an electrical state and allowing him to melt and harden his body at will, smashing the latter's head and killing him and leaving Tether Tyrant in horror in the process.

In Guardians of the Globe, the leader of The Order, Set, seeks out to cause destruction across the world , he forms all the members of the organization to prepare for his father's reign of power. They began causing random attacks all over Earth, but organized an attack on Paris which was utterly destroyed and killed millions by them. The Guardians of the Globe arrived and started fighting The Order. After Brit ends the battle by unmasked Set and leaving the latter accepting his punishment but vows to succeed in his goal. Machine Head's current fate is unknown. 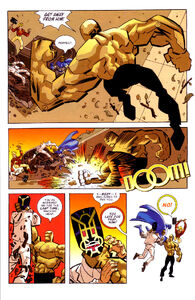 Machine Head being attacked by Titan. 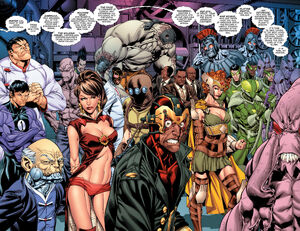 Machine Head with the rest of the members of The Order. 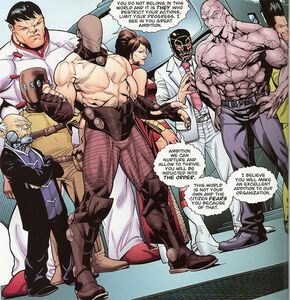 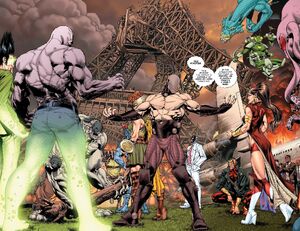 The Order at the destruction of Paris.

The Order preparing to fight The Guardians of the Globe. 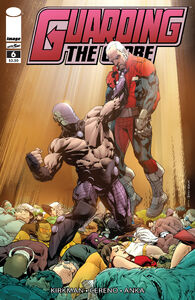 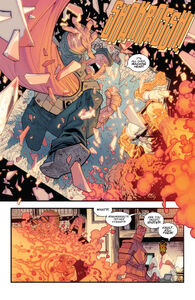