Escape from the undead children (failed).

Macy is a minor antagonist in Trick 'r Treat. She is one of the six characters to be punished by the dead on Halloween night for not following the old halloween rules.

Macy is one of the Trick or Treaters that visits Steven Wilkins's house. She asks him for a pumpkin that she says she's collecting for the charity organization UNICEF, but in truth she wants to use it for a prank.

Macy, Schrader, Sara, Chip, and Rhonda, a servant, journey to the local rock quarry, where Macy tells them the local urban legend of "The Halloween School Bus Massacre". Eight mentally challenged children died in a school bus on Halloween; the driver had been paid by their worn out parents to dispose of them, and was the only survivor of the crash. The group offers eight jack-o'-lanterns as tribute to the dead children.

The group plays a prank on Rhonda in which they pretend to be the undead children and chase Rhonda until she trips and knocks herself out. Macy shows no sympathy for Rhonda, saying the prank went "perfect", and she gets angry when the others want to help Rhonda calm down when she awakes frightened after her head injury.

Macy ends up kicking one of the lanterns in the quarry's lake in her anger, but shortly after they begin hearing strange voices.

Rhonda and Schrader, who stayed to comfort her, hear distant screams. At first Schrader assumes it's another prank, but the screams continue and the sound is genuine. It turns out to be the real undead school bus children have arisen after Macy killed the jack o'lantern. They flee but Sara is killed as the zombies grabbed her by the chains on her costume.

It's left ambigious if Rhonda still thought it was a prank, or if she intentionally left them to die as revenge for their cruelty. Her smug wave as she rides up strongly suggests the latter, along with her lack of reaction to them being eaten off view. 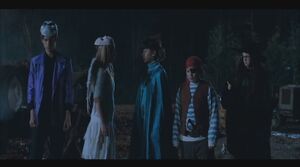 Macy with the other kids.

Macy begs for her life.