Member of the Bagra Army

MadLeomon is an antagonist and the first villain in the anime, Digimon Fusion.

MadLeomon is an unknown/Champion level Digimon that resembles a zombified muscular version of Leomon. He has spikes on his shoulders and a dark gray mane. He has dark red eyes with black sclera, purple skin with stitches, crimson red claws, and bones sticking out from his chest and back. Like almost every other antagonists in Digimon Fusion, MadLeomon can fuse with other Digimon to make himself stronger. He dislikes humans who come to the Digital World.

In this form, MadLeomon absorbed an army of Mammothmon, Troopmon, and Chikurimon. His entire body is covered in armor wrapped in chains, and has a chainsaw for his right hand.

In this form, MadLeomon absorbed an Orochimon and has his body. MadLeomon's mane changes from black to yellow, his arms and legs are snake, has two snakes that come out of his back, snake-like shoulder armor, and a snake's rattle on his tail.

In this form, MadLeomon absorbs three Apemon. MadLeomon's mane becomes blood red, his spikes are longer and sharper, wears a yellow loincloth, and appears to be more muscular.

Originally, MadLeomon was Leomon, the guardian of the Forest Zone until he was corrupted by Bagramon's evil and became a member of the Bagra Army. MadLeomon first appeared when Mikey and the others arrived in the Digital World, attempting to kill them when they are saved by Ballistamon, Starmon, and the Pickmons with Shout having them in defeating MadLeomon's forces. In retaliation, MadLeomon absorbs his followers to assume his Armed Mode and nearly killed the Digimon when Mikey uses his Fusion Loader to give Shoutmon the edge to defeat MadLeomon with the Star Sword. Despite his reluctance to run, MadLeomon is forcefully recalled by Tactimon.

Later on, refusing to let humans run rampant in his domain, MadLeomon decides to destroy the Village of Light using an Orochimon before using it to kill Mikey and his friends instead. But when he sees that Orochimon was being overwhelmed by Shoutmon, MadLeomon Digifuses with the eight-headed serpent to assume his Orochi Mode form before being defeated by Shoutmon X2, forcing MadLeomon to retreat once again.

MadLeomon was imprisoned in a cage by Tactimon as a result of his failure, but Tactimon took pity on him and gave him one more chance to defeat the Fusion Fighters. Summoning a Drimogemon to create giant bamboo shoots, MadLeomon sends army of Apemon to attack the group before absorbing them to enter his Final Mode. During the battle, the Starmons fused into the Rare Star Sword, allowing Jeremy (who was trapped on top of a spike wall) to toss it into the ground like an arrow, where it struck Drimogemon directly on the head, killing it, causing the bamboo shoots to fade away. Though defeated by Shoutmon X2 and Dorulumon, MadLeomon unleashes his ultimate power so he can destroy the resistence. Shoutmon Digifused into Shoutmon X4 (as X3) for the first time and MadLeomon attempts to crush him, but Shoutmon X4 (as X3) tosses MadLeomon into the sky and destroyed him with his Varooma Boomerang attack. With MadLeomon defeated, Mikey receives his first Code Crown.

After Mikey acquire the last Code Crown, during a fight with Grademon, he ended up wishing he could do something to save Grademon from his corruption. When that happened all of the evil Digimon that were defeated by the Fusion Fighters were revived and their evil were purged. One of them was MadLeomon who was revived and reverted back to his original form, Leomon, adding Mikey during the final battle with DarknessBagramon. 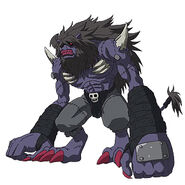 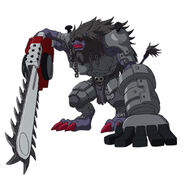