Extensive knowledge about creation of toys
Equipped with exploding toys

Blackmail Gotham City so he would be able to buy and create more and more toys (failed).

Use of illegal explosives

Theodore "Ted" Dymer, or also better known as the Mad Bomber, is a minor antagonist from Batman: The Animated Series. He is a toy-shop clerk who is obssessed with toys and imitated a bomb spree based on a television villain from an old TV show The Gray Ghost.

He was voiced by Bruce Timm.

Dymer was an innocent owner of a toy store named Yester Toys where he purchased classic toys and things. However, business wasn't astonishingly successful and it didn't satisfy Dymer's obssession. He was obssessed with toys and spent lots of money on toys of different kinds. Although he had lots of toys in his collection, his funds were low. Fortunately, Simon Trent, the actor who played the Gray Ghost in the tv show was selling his old collectables to pay up his rent. Dymer remembered an episode of The Gray Ghost, he realized other purposes toys can do.

He copied the skills and tactics of the Mad Bomber from The Gray Ghost TV show and planted bombs in the remote controlled cars that were designed and modeled after the same cars used in "The Gray Ghost". Some of them were even actual models from the show that he got from Trent. Ted blew up a plastics lab in Gotham. After that, he began a bomb spree and leaves threats at each scene demanding $1 million or a new area would destroyed.

His tracks were untraceable that left the bomb squads and the GDPD stumped. However, Batman figured out his tracks. He remembered an episode of The Gray Ghost named "The Mad Bomber" and put the pieces together. Batman tracked down Trent who denied the involvement but Trent recognized a sound which Dymer's cars made when they drove shortly before the Gotham Art School was destroyed. Learning from this, Batman and Simon Trent aka The Gray Ghost were able to find out Dymer's tactics and prevented Dymer's next bombing attempt. Although his attempt to bomb the Gotham Library was foiled, he wasn't finished yet.

Batman and the Gray Ghost tracked Dymer to his toy store and found his control center where he operates the remote controlled cars. He revealed his true greedy colors and plotted to use his bombs to hold the city for ransom, for the sake of his toy obsession. He attempted to defeat the Dark Knight but he never got another toy in his life, for the Gray Ghost swung to the rescue and set fire to Dymer's lair.  The Mad Bomber was stopped and his toy store and control center were destroyed. Defeated by his own bombs, Dymer cried over the loss of all of his toys and was arrested afterwards. Then Simon Trent was declared a hero and all the episodes of The Gray Ghost are released on home video.

Dymer had no superhuman powers but had lots of toys. Most of the toy cars had explosives in them. 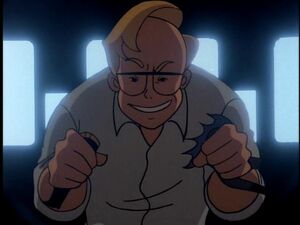 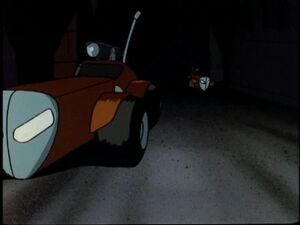 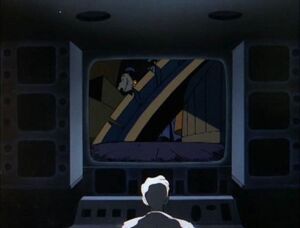 Dymer's defeat
Add a photo to this gallery 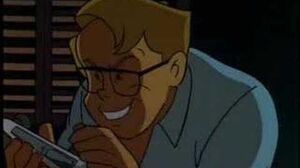 Batman TAS - Gray Ghost- (With Adam West and Bruce Timm!)
The Bomber's last stand
Add a photo to this gallery

Retrieved from "https://villains.fandom.com/wiki/Mad_Bomber?oldid=3558297"
Community content is available under CC-BY-SA unless otherwise noted.