Villains Wiki
Register
Don't have an account?
Sign In
Advertisement
in: Doctors and Scientists, Mastermind, Cartoon Villains,
and 52 more

Servant of the Blot

Attach a dog's head onto the body of a chicken (The Mad Doctor; failed).

He was voiced by the late Billy Bletcher in the original cartoon, and Dave Wittenberg and Jim Meskimen in the Epic Mickey games.

In the animated short he debuted in, the Mad Doctor kidnapped Mickey's beloved companion Pluto and planned on conducting a grotesque experiment involving removing Pluto's head and reattaching it to a chicken's body - Mickey fights his way through a series of traps to save Pluto only to end up strapped to a table himself with a buzzing saw.

Mickey then awakes in his bed with a bee buzzing around, it turns out the entire event was a nightmare.

The Mad Doctor would return many years later as one of the main antagonists of the video game Epic Mickey, where he inhabits a world of forgotten characters that have been warped by the influence of a demonic version of the Phantom Blot. Unlike the Mad Doctor of the animated short, this one is very much real and provides a true threat to Mickey during his adventure. In Epic Mickey he created a whole army of robots called Beetleworx, they are machines covered in paint for protection. He is also responsible for taking away animatronic Goofy, Daisy, and Donald.

The Mad Doctor also appears as a boss in the video game Mickey's Wild Adventure, where one of the levels is based on the Mad Doctor's castle - inhabited with macabre enemies such as bats and animated skeletons. At the boss level to get to the mad doctor you have to destroy his Beetleworx machines and his Beetleworx army a cutscene pops up. Mickey and Gremlin Gus is face to face with the mad doctor to only find out he his animatronic in which to means he cannot be thinner out. He explains his plan was when the phantom blot sucks all the paint in the wasteland only the animatronics will survive and I will rise to be their king after saying that Gus takes the last missing rocket piece, in which the mad doctor blasts out of the wasteland.

Epic Mickey 2: The Power of Two will return Mickey and his brother Oswald against the Mad Doctor. The story starts off that all the forgotten cartoons fixing up Mean Street until an earthquake began, and out of the quake is the Mad Doctor. He tries to make up with Oswald to try to redeem himself. He ends up him singing the song "Help Me Help You" making Oswald accept his apology. Of course, Gus and Oswald's girlfriend Ortensia seeks out Mickey for help. In the game, the Mad Doctor has invented a new Beetleworx that he calls a Blotworx. In the first game there were Beetleworx and Blotlings somehow these two got together. The Blotworx is basically a Beetleworx with a spatter inside controlling it. One boss level there is an animatronic Elliot the dragon from Disney's electrical parade, it's connection with the mad doctor is that it is a blotworx.

As his name suggests, the Mad Doctor is murderously insane and takes much joy in causing harm to others, but makes up for it by being a scientific genius. His work always consists of dark cutting machinery and various other contraptions, most of which are used in his deadly experiments; though some of his gadgets have served a purpose as the Beetleworx was at one point a construction crew. In Epic Mickey, his personality is expanded; though insane, he is also very conniving and manipulative, as he uses the jealousy of Oswald to distract Mickey while he works closely with the Shadow Blot (who he is also using for his own purposes). It is even shown that when he is working for Oswald in Epic Mickey: Tales from the Wasteland that while seemingly trying to help the rabbit, he is, in reality, waiting for the right time to double-cross him and take control of Wasteland.

In the original cartoon, Mickey hears Pluto yelping for help in the middle of a stormy night. He looks out the window to find that Pluto is being kidnapped by a man in a black cloak. Mickey follows them to a castle. Unfortunately, Mickey loses them and travels through the mysterious castle to save Pluto. While Mickey is searching, the man in the cloak reveals himself to be a mad scientist to Pluto. He also shows his plan to attach Pluto's head to the body of a chicken to see if it will bark, crow, or cackle. Soon enough, Mickey arrives but is strapped down and captured. The Mad Doctor decides to eliminate Mickey by experimenting on him. Just when Mickey is about to meet his demise, he awakens in his bedroom. It turns out, that it was all a nightmare as Pluto jumps into Mickey's bed and licks him multipile times.

The Mad Doctor appears as a boss in level 2 having Pluto kidnapped, he can be beaten by throwing the marbles or jumping over him, he'll throw poison as a kind of attack, once defeated, Pluto is rescued.

In Mickey's Wild Adventure he accidentally turns himself into a baby after Mickey defeats him and rescued Pluto.

Years ago, when the Mad Doctor arrived in Wasteland, his immediate priority was to seek power. Becoming a close partner to Oswald, he constructed the Beetleworx as a construction crew to help improve the land as new arrivals came in. But when Mickey created the Shadow Blot and the Blot Wars began, he quickly switched sides and became the Blot's closest ally. He offers the Blot the opportunity to become a beloved cartoon star in his own right (the desire of all cartoon characters) and sets his plot into motion to drag Mickey back into Wasteland and set him and Oswald against each other. He is later shown to be an animatronic, (this is so when the Blot sucks the paint out of Wasteland) only the animatronics would survive, and he would be their ruler. After a battle with Mickey, the Doctor is shot up into the sky on his machine and isn't seen for the rest of the game.

In the sequel, the Mad Doctor has shown his face again in Wasteland, claiming he had a change of heart and is now ready to help the other toons rebuild Wasteland after the recent strings of earthquakes. After making his grand re-entrance in Mean Street, he manages to gain Oswald's ear again and begins telling him of how he plans to help repair Wasteland and warning him of the Blotworx, creatures born of a Spatter fused with the mechanical parts of a Beetleworx. However, not believing the Mad Doctor's story, Gus and Ortensia successfully reach out to and call Mickey back to Wasteland to help with the Mad Doctor.

Throughout the game, the Mad Doctor speaks mostly in song and has been singing about how he wishes to change back from animatronic to toon (he did so because he wished to control the Blot). He is in a race against time as his animatronic parts are beginning to break down. After Mickey and friends defeat the grumpy and stubborn gremlin Prescott, the Mad Doctor and one of his Beetleworx appears with Animatronic Daisy, her Blotling cameraman, and Pete, surprising the group before his Beetleworx hypnotizes Prescott into taking the fall for everything that had happened. After, he announces his plans to build a new attraction in Wasteland to lift everyone's spirits after everything that has happened.

However, as Mickey and Oswald discover later, his good acts were all a ploy for his true motives: to become a toon again and leave Wasteland to destruction. While traversing through the World of Evil projector, the doctor reveals (in the song) that he survived his last battle and crash-landed in the Disney Gulch, beginning to the scheme of his revenge against Wasteland. He created the Blotworx to be his new army but had to outcast them because of their unpredictable and irrational nature. They discover more of the doctor's plans after discovering his old attic from Lonesome Manor. While he caused Prescott to turn on his friends, he had him build a television (similar to the one Gus uses to call Mickey) to broadcast his show to the cartoon world. While he also used guardian siphons to pull the guardians out of Wasteland, the REAL reason for Wasteland's recent earthquakes, he would use them to become a toon again and he would be able to leave Wasteland after the cartoon world remembered him enough so he could escape.

Mickey and Oswald used a projector in the Mad Doctor's Attic to go back to Mean Street in time where the doctor's scheme was already in motion and he used his new attraction to trap Ortensia, Clarabelle, and Horace. He then gave the heroes an ultimatum: give him the brush so he could become the most powerful villain in the cartoon world or watch as he would destroy Wasteland and thin out their friends. With help from Oswald, the heroes chose to fight and successfully defeated the doctor. There are two endings to the battle (something unlike that happened with the Blot).

In the Paint ending, after Mickey sprayed paint on his face to save Oswald, the doctor has a change of heart and uses rocket shoes to propel himself and them back towards Mean Street. After Ortensia, Clarabelle, and Horace are free, he then asks how they could have the heart to save him after all he did, to which Mickey and Oswald tell him that's what "heroes" do, the same reason he saved them. Hearing this, he then understands what true respect comes from (not from power, but from courage and love) as the Guardians react to this and convert him back to a toon. He then thanks Mickey and Oswald and exclaims that he will truly be good again. He is last seen as a truly reformed toon on a parade float with Mickey, Oswald, Ortensia, and Gus in the end. In the Thinner ending, Mickey frees Oswald from the Mad Doctor's clutches when he tried to save him and they are blasted back to the surface of Mean Street as he falls into the thinner below.

The Mad Doctor appears in the Classic Kingdom mini-game with the same name. The player must control Sora while rescuing Mickey from The Mad Doctor's castle. Sora has to avoid chainsaws, skeletons, bats, burn the rope attached to a giant spider, and climb a different rope while dodging skulls to reach the goal. 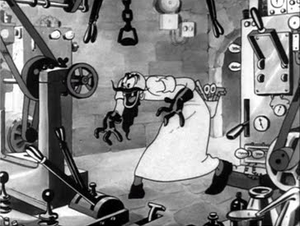 The Mad Doctor in the original short. 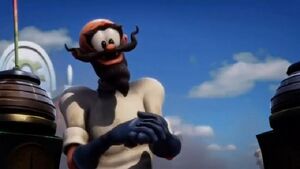 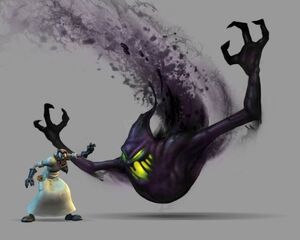 The Mad Doctor with the False Shadow Blot. 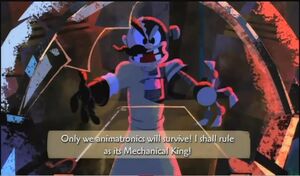 The Mad Doctor revealed to be an animatronic in Epic Mickey. 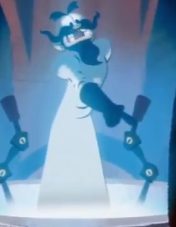 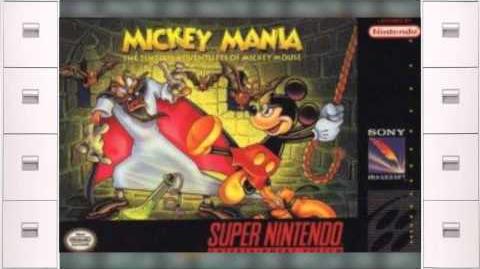 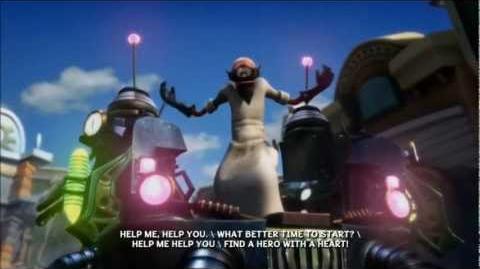 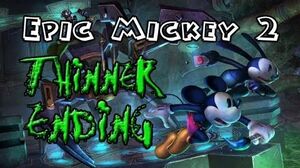 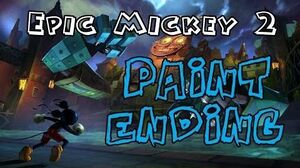