Keep Bunny all to myself from Kitty.

Kill Courage and prevent him for taking away Bunny (all failed).

Mad Dog is the main antagonist of the Courage the Cowardly Dog episode "The Mask". He is a brown anthropomorphic dog/pimp who took Bunny away from Kitty to be his lover/prostitute.

Mad Dog is an evil pimp and crime lord who kidnapped Bunny from her girlfriend, Kitty due to jealousy and made her into a prostitute. He forced Kitty to leave town as well. It was because of him that the Kitty believed all dogs were evil. Any time Bunny did something such as try to escape, he would punish her by burying her in a flower pot, leaving only her head to surface.

Being scarred by Mad Dog's actions, Kitty arrived at Courage's house, repeatedly beating him due to being under the notion that all dogs are evil. After Muriel invites her to stay at the house for a while, Courage is desperate to find a way to get rid of her. After he finds Kitty's squeaky toy (a gift from Bunny) he manages to find Bunny in Mad Dog's apartment after she's been put in a flower pot for trying to escape. Courage helps her out, but not before going through Mad Dog's minions.

After they escape to get to the train that Kitty's on, Mad Dog chases both Bunny with his car in an attempt kill her, but Courage dives through the window and spun the car onto the railroad tracks. A passenger trains approaches and Courage jumps out the car before it gets destroyed Mad Dog is left laughing and presumably utterly broken on the train's diesel-powered steam locomotive while holding the steering wheel. It's completely unknown if Mad Dog died afterwards by the impact or if the impact just rendered him dizzy at that moments, but it maybe possible that he eventually fell into the rails, allowing the train to run over him, or that he maybe fell off the train to the sandground, defeated albeit safe.

Although little of Mad Dog's personality is showcased in his relatively brief screentime, Mad Dog is shown to be extremely abusive and highly domineering towards Bunny. Despite this, whenever he went too far in his wrath, he was shown to be suave enough to coax Bunny back into his arms; a trait of several real-life abusers who pretend to have sympathy or guilt in order to get their prey back to them (an excellent example of this in fiction is Stanley from A Streetcar Named Desire). On the whole, though, Mad Dog was brutal, dangerous, and possessive to the extent where he'd try and murder anyone who attempted to interfere in his business, and, when sufficiently pushed, Bunny herself. The implied prostitution as well as the fact Mad Dog was a fairly realistic portrayal of an abusive boyfriend (played cartoonishly enough for the series' standards, however) made Mad Dog a disturbingly dark villain for a series that, while frightening, was usually cartoony and harmless. 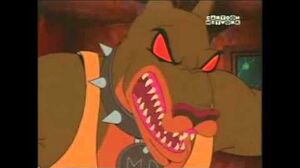 Retrieved from "https://villains.fandom.com/wiki/Mad_Dog_(Courage_the_Cowardly_Dog)?oldid=4215804"
Community content is available under CC-BY-SA unless otherwise noted.