The world's most wanted outlaw

Mad Dog McCree is the main antagonist in the western live action arcade game of the same name and the sequel Mad Dog II: The Lost Gold.

Mad Dog is the most wanted outlaw that terrorizes the western town and he kidnapped the Mayor and his daughter. Mad Dog attempts to kill the Prospector with dynamite, the stranger shoots the fuse and saved the Prospector. After the stranger went down some winding paths, the stranger encounters Mad Dog's hideout where you shoot the chimney, shooing Mad Dog's henchmen out of there, leaving nothing but a note saying, "Meet me in town.". After the stranger defeats several outlaws, Mad Dog will come face to face with the stranger in a showdown. After shooting him twice, he lies to the ground, presumed dead. However, he survived as he ride on a horse as the credits rolled.

Mad Dog returned in Mad Dog II: The Lost Gold, and this time, he is after the treasure. Mad Dog shows up once again for the second showdown, and is defeated once again when you quickly shoot him twice.However at the end just like the first game he survived as he rides on his horse as the credits rolled. 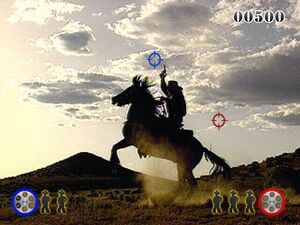 Mad Dog McCree riding out in the west.

Add a photo to this gallery
Retrieved from "https://villains.fandom.com/wiki/Mad_Dog_McCree?oldid=3974686"
Community content is available under CC-BY-SA unless otherwise noted.