Mad Dummy (also known as Mad Mew Mew in the Switch version) is a minor antagonist and mini-boss in the indie-RPG game, Undertale. They are a ghost monster that lives inside a dummy in the Garbage Dump and the other dummy's cousin. They try to kill the protagonist to avenge their cousin, regardless of what their actions are.

The Mad Dummy seems to be somewhat psychotic, wanting to avenge their cousin even if the protagonist does nothing to them. They seem to hate to feel powerless since they felt disarmed when it's dummies don't kill the protagonist quickly. They also often repeat themselves at least three times and they maniacally laugh often.

Despite their psychotic nature, they seem to be calm and collected at times given that they can cooperate with some other people and they do leave Frisk alone after Napstablook interrupts their battle and they serve as Undyne's punching bag for training outside of her home.

When the Mad Dummy turns into Glad Dummy on the Genocide Route, they become so angry that they became corporeal with their dummy, making them happy and thankful to Frisk, so if anything, the Mad Dummy just needed to let off some steam.

They also seem to care about their cousin, but they might be a little overprotective considering that they still attack the protagonist even if they do not do anything to them.

When the protagonist is about to leave the dump in Waterfall, the Mad Dummy encounters them. They reveal that their cousin was possessing the training dummy from the beginning of the game. No matter how the player interacted with the dummy earlier in the game, the Mad Dummy is enranged and attacks the player.

They intended on stealing their soul and after failing to kill the protagonist, the battle is interrupted by Napstablook, ending the battle and the Dummy leaves.

They are later found outside of Undyne's house. If the True Pacifist Route is completed, the Dummy apologizes for it's actions by calling itself a dummy.

In the Nintendo Switch version of Undertale, after the battle with the Dummy, they find and possess a Mew Mew doll in Sans and Papyrus' house and attempts to fuse with it. However, they fail.

After defeating Mettaton EX, the protagonist can enter the doors to Mew Mew. They can either fight or touch the doll. If the doll is touched a certain amount of times, a fight can start.

After their fight, they can appear outside of Undyne's house in the True Pacifist Route, and in the credits, Mew Mew replaces the Dummy.

Mad Dummy during their battle. 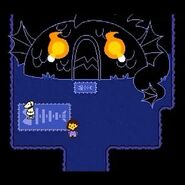 Mad Dummy outside of Undyne's house.

Mad Dummy (who is now inside of a Mew Mew doll) attacks Frisk for a second time.
Add a photo to this gallery

Retrieved from "https://villains.fandom.com/wiki/Mad_Dummy?oldid=3769676"
Community content is available under CC-BY-SA unless otherwise noted.