Thuggish Gangsters
The Mad Gear Gang features canonically in the first two Final Fight games as the main antagonistic faction, plaguing the citizens of Metro City. This group consists of about 43 members.

The Mad Gear, led by Horace Belger, controlled virtually all of Metro City, from the slums to the transportation systems all the way to the uptown district and at least one policeman in their pocket. This situation came to a head when Mike Haggar was elected mayor after a campaign promising to be tough on crime.

The gang attempted to control the new mayor by kidnapping his daughter Jessica and holding her hostage. Rather than capitulating or negotiating, however, Haggar called on Jessica's boyfriend Cody and his best friend friend Guy and fought back. The trio assaulted every ringleader in the gang that they could lay their hands on until they located Jessica in Belger's penthouse apartment. In the ensuing fight Cody defenestrated Belger, leaving the gang reeling and leaderless.

The gang members that remained regrouped under the leadership of Belger. However, Guy was away training with Zeku and was unaware of the situation, so Rena's sister Maki enlisted Haggar's help as well as that of a swordsman named Carlos Miyamoto. The new trio smashed Mad Gear hideouts around the world until learning from a defeated Rolento that Rena and Genryusai were being held in the gang's main headquarters in Japan. There, they fought and defeated Retu, and the Mad Gear have not recovered nor been heard from since.

Several members of the gang are known to have struck out on their own since the destruction of the gang, choosing paths as disparate as professional wrestling, to attempting to found a utopian nation, to continuing in law enforcement. What became of the rest of the gang, or even how many survived their wars against Haggar and his allies, is unknown.

MG in turf in Eurasia (FF2) 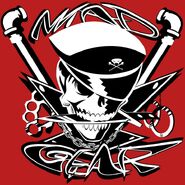 Retrieved from "https://villains.fandom.com/wiki/Mad_Gear?oldid=4355212"
Community content is available under CC-BY-SA unless otherwise noted.