Insane Murderer
Tarrant Hightopp, also known as the Mad Hatter or simply the Hatter, is a major antagonist of the 2016 Hong Kong Disneyland horror attraction The Nightmare Experiment, and its 2017 sequel attraction Maze of Madness: The Nightmare Experiment Continues. He is a darker and more villainous adaptation of the version that appeared in the 2010 live action film Alice in Wonderland by Tim Burton, and its 2016 sequel Through the Looking Glass.

Professor J.T. Wu is the head of the titular Nightmare Experiment, and plans on studying Disney's most nightmarish realms through the use of a dreamscape. He gets guests to serve as his test subjects in these realms, going through dark realms such as Dr. Facilier's bayou, a haunted pirate prison, and Sid Phillips' room.

The guests then enter a twisted form of Wonderland/Underland, where the Mad Hatter sits in a padded cell of the Red Queen's castle, having a tea party with headless dolls. He kidnaps a guest and sits them down for tea, but then tells them that the "voices" tell him they would look better without a head, and proceeds to pull out a pair of scissors and decapitate the guest, with red curtains falling so the others cannot see the gruesome murder. A Card Soldier escorts guests through the realm, where gargoyles and a returned Captain Jack attack them before the survivors escape back to the Royal Laboratory.

Over the next year, Wu was arrested for his crimes, though he escaped into the portal and was lost in the dreamscape. The new guests were brought in to once again enter the dreamscape and search the dark realms to find Professor Wu, sent back into the dreamscape by one of Wu's assistants and traveling through more dark realms like Stromboli's caravan and a locked down Monsters Incroporated.

Guests reenter Wonderland, where the Mad Hatter has gotten free and opened up a crude hat shop with decapitated heads as busts displaying his work. He tries to capture the White Rabbit, but fails. Instead, he captures another guest and straps them to a large chair. Just like the the first time, he then cuts off their head because the "voices" told him to.

Guests later escape to the Beast's castle and the Underworld, where Hades has captured and dammed Wu for eternity.

The Mad Hatter is psychotic and insane, constantly hearing voices that tell him to decapitate anything from dolls and toys to humans and animals. Even when not hearing the "voices", he exhibits a mad and darkly jovial attitude as he commits crimes and hurts others. 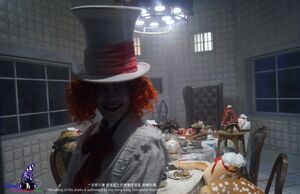 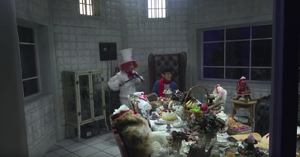 The Mad Hatter brandishes scissors to decapitate a guest. 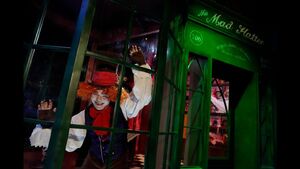 The Mad Hatter in his hat shop. 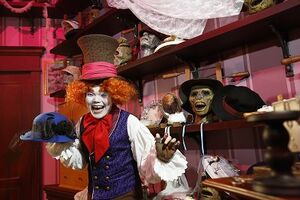 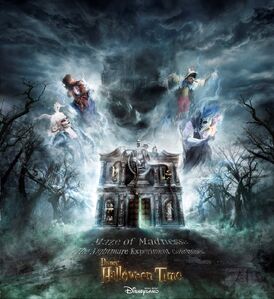 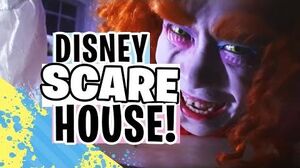