Homicidal Artificial Intelligence
Mad Jack is the third world boss and a minor antagonist in Donkey Kong 64. He is encountered at the end of the Frantic Factory level, where he serves as the first boss that Tiny Kong fights.

After opening Frantic Factory's boss door, Tiny Kong finds herself in a pitch-black room with several glowing squares on the floor. Venturing onto one of these squares, she is surprised when they rise into the air. Suddenly, Mad Jack appears from a large box that falls out of a nearby toy rejection chute.

Mad Jack first attacks by re-entering his box and hopping from square to square attempting to crush Tiny, who has to frantically jump to different squares in order to avoid the crazed toy. If Tiny manages to avoid Jack, he will then pop out of his box and begin hurling fireballs at the Kong. While Mad Jack is busy doing this, Tiny must press a switch on a nearby square. If the square the switch is on is the same color as the one Jack is on, then he will be electrocuted. However, Tiny will electrocute herself if the switch's color doesn't match Mad Jack's platform color.

Eventually, after being damaged multiple times, Jack will begin to hop around faster and also shoot laser blasts from his robotic eye, which create shockwaves when they hit the platforms. He will also turn invisible after taking four hits. In order to track where Jack is, Tiny must watch the sparkles that trail behind him when he jumps, and Jack will also still light up the squares he jumps on. After Jack gets electrocuted 5 times, his square (along with all the other squares) will fall, and he then (humorously) falls and crashes to the ground below after doing a mock "wave goodbye", which seems to destroy him since there is no trace of him left afterwards. 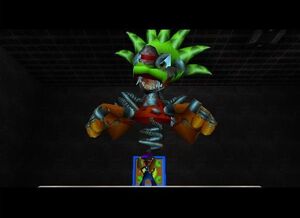 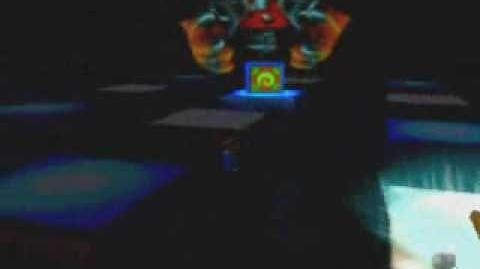 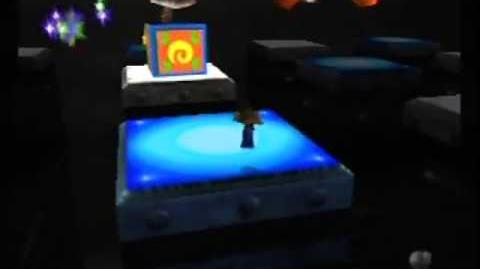