The Same Skills as Jack

Kill Samurai Jack and take him over entirely (failed).

Mad Jack is one of the main antagonists in the Samurai Jack series. He was created by Aku to see if he could defeat Samurai Jack using his own skills against him. He has all the powers and abilities of Jack, but none of the restraint.

Like Jack, he was voiced by Phil LaMarr of MADtv fame.

Mad Jack is shown to be very rude, violent, destructive, impatient, and rather psychotic. In essence, he is the physical embodiment of all of Jack's rage.

After having to fight several bounty hunters throughout a small city, Jack became infuriated, because no one left him alone and he was tired of fighting. He tried to calm down after defeating the last of them, but his sandal strap broke, causing him to throw it at one of his wanted posters. The poster then started to light up and energy came from it that formed in to Mad Jack, whose sole purpose was to destroy Jack for Aku. The two fighters traded blow for blow, but neither one could best the other. Jack then calmed himself and found inner peace, which cause all of his negative emotions to fade away. He then claimed the fight was over as Mad Jack didn't exist since his own negative emotions were gone. This infuriated Mad Jack as he felt Jack looked down on him and didn't even believe him a challenge. He tried to attack Jack once more, but was ultimately absorbed by the original before he could land a blow.

Mad Jack then later on continues to torment Jack mentally, continuously urging him into the wrong path. One time, when he was chased by the Daughters of Aku, Mad Jack appears and insists that Jack commit seppuku because his quest is now pointless since he lost his sword. Another time is when Jack is recovering from a flesh wound in a cave, mocking him over the fact that he had just killed a human being for the first time. Mad Jack appears again when Jack and Ashi were swallowed by a giant monster, trying to convince him to abandon Ashi for dead to save himself.

Mad Jack reappears one last time in the episode during Jack's meditation near the crater of the time-portal 50 years later. He appears in an even more twisted form behaving even more malevolent than before. When Jack failed to create the perfect tea in order to gain the answers needed, Mad Jack lashes out against the Monk and attempts to slap the answers out of him, but is stopped by Jack, who confronts his inner demon, realizing that Mad Jack's overwhelming anger was why the sword was lost in the first place and is the reason he lost his hope. Jack managed to eventually see through his rage after having been sent flying by a slap from Mad Jack and permanently dispels Mad Jack for good. Having done this, Jack would eventually be reunited with his sword and regain his original appearance, finally free from Mad Jack's influence. 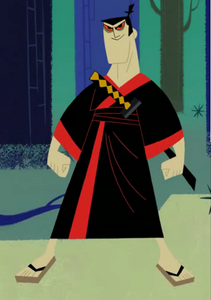 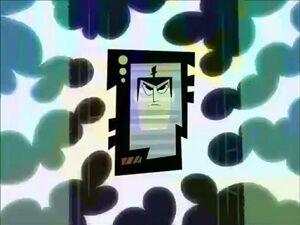