Teaching the Titans a lesson.

To destroy the Teen Titans (failed).

Mad Mod (also known as Neil Richards) is a villain from the Teen Titans media including the original comics. He is a recurring villain in the show and an enemy of the Teen Titans. In the comics he used to fashion a gimmick and weapon; for example, he'd used a modified shirt to mind control someone. He used this gimmick in the spin-off comics for Teen Titans and Batman: The Brave and the Bold.

The Mad Mod was a Carnaby Street fashion designer named Neil Richards. Although designing "grinchy mod wear" was his first, truest passion, he was also a criminal. Working out of his tailor shop, he used his clothing line as the vehicle through which to smuggle illegal contraband to other countries. To do this, the Mod would saturate his outfits with whatever rare chemical he was selling so that it soaked into the fibers. Once they cleared customs and arrived at their destination, he used a reagent to separate the chemical compounds from the fiber, making it available again for resale.

The Mad Mod designed special outfits for a popular American rock 'n roll singer named Holley Hip. Holley had no idea that he was smuggling the Mod's contraband every time he wore one of his outfits. The U.S. Treasury Department began to grow suspicious of Holley Hip and believed that he was working in collusion with the Mad Mod. As such, a Treasury official asked the Teen Titans to shadow Holley Hip during his tour of Europe.

The Titans accompanied Holley Hip to London, England and they immediately began investigating the Mad Mod. Kid Flash was the first to get a look inside the Mod's clothes shop, but the Mod's henchmen took Kid Flash by surprise and knocked him out. The other Titans came to "Ye Mad Mod's Real Gear Garb" looking for their teammate, but by this point, the Mod had already disguised Kid Flash as a manikin. The group loaded Kid Flash into the back of a truck and started to escape. Wonder Girl intercepted them, but the Mad Mod ran her down. Fortunately for Wonder Girl, she emerged from the hit and run unscathed.

Aqualad latched onto the back of the Mad Mod's truck and rescued the unconscious Kid Flash. He took him beneath the pylons on the dock of the Thames and placed him there for safe-keeping. The Mad Mod pursued Aqualad in a personal watercraft patterned after a barracuda. Aqualad disabled the vehicle, but the Mod got away.

Robin and Wonder Girl knew that the Mod was on his way to France with another shipment of stolen goods, so they sneaked aboard his airplane and tried to gather evidence against him. The Mod discovered the two Titans and incapacitated them with knockout gas. He then kicked them out of his airplane and let them fall to their doom. The Mod dove after them with his own parachute, and grabbed a hold of Wonder Girl's magic lasso. He also stripped off Robin's Utility Belt, thus stealing all of the photographic evidence that Robin had on him. Wonder Girl recovered her lasso, but the Mad Mod got away.

The Mad Mod reached the Paris stadium where Holley Hip was performing. He needed to retrieve Holley's outfit, so he could synthesize the product that was planted inside the fibers. The Teen Titans caught up with him, but it was Holley Hip who finally defeated the Mod by smacking him across the back of the head with his guitar.

The Mad Mod popped up again only a short time later. This time, however, he sought to purloin even greater riches. He stole the royal scepter of the Queen of England. Once again, the Teen Titans intervened, but the Mad Mod was ready for them and sabotaged their costumes so that they would actually hinder their efforts. The Titans discovered a way to bypass this setback by switching costumes with one another. The Mad Mod tried to escape but began drowning in the River Thames. Aqualad rescued him and the Mod was taken into custody.

The Mad Mod did his time, after which, he retired from the life of a petty criminal. The reformed Mod devoted himself to his fashion design and became a successful and immensely popular legitimate designer. Everybody wanted to get their hands on a "Mad Mod Original".

Eventually, the Mad Mod was contacted by Loren Jupiter and asked to meet with him in the United States. Jupiter was in the process of putting together a new group of Teen Titans and asked the Mod to design their super-hero costumes for them.

Richards believed in this team and grew quite close to them, oftentimes disagreeing with Loren Jupiter as to the best means of handling them. He even designed the interior of the team's secondary headquarters at Knock Out Video.

When Loren Jupiter's psychotic son, Haze, decided to avenge himself against his father for abandoning him as a child, he abducted Jupiter and Neil Richards, bringing them back to his alma mata, the Cardy Boarding School in Maine. The original Titans regrouped to find Loren Jupiter and found Richards bound and gagged inside the Titans helicopter. Surprised to see him, they nonetheless freed him from the ropes.

Richards was later present during the funeral service of the fallen Titan, Joto.

Mad Mod appears in the animated series as the main antagonist of the episodes "Mad Mod" and "Revolution".

Mad Mod first faces the Teen Titans in a school that he creates himself. He tries to get them to listen to what he says but the Titans are determined to bring him down. Robin finds out that the real Mad Mod is hiding in a secret room of the school, operating machines, and that they were facing an illusionary Mad Mod.

Mad Mod later gets revenge on the Titans by disrupting the Fourth of July and turning Jump City to a bizarre version of England. He uses his cane to steal Robin's youth and becomes young again. The rest of the Titans try to defeat him and save Robin but their ideas become failures. They finally managed to sneak up on Mod and Robin (who is a big man) grabs the cane and regains his youth. Mad Mod retains his looks.

Somehow, Mad Mod managed to regain his youth and was recruited into the Brotherhood of Evil. He participated in a race with Gizmo, Ding Dong Daddy, and other villains but was stopped by Red X. When the Titans attacked the villains in the final battle in the Brotherhood's base, Mad Mod was defeated and was flash-frozen with the rest of the villains.

He was voiced by Malcolm McDowell, who also played Alex in A Clockwork Orange, Caligula in Caligula, Kesslee in Tank Girl, Lord Maliss in Happily Ever After, Tolian Soran in Star Trek: Generations, Andrej Evilenko in Evilenko, The Shaman in the Aladdin TV series, Colonel F. E. Cochrane in Blue Thunder, Arnold Gundars in I Spy, Arkady Duvall in Batman: The Animated Series, Marcus Kane in Doomsday, Daniel Linderman in Heroes, Gangster in Gangster No. 1, Dr. Calico in Bolt, Tower in Phineas and Ferb, Sinclair in Home Alone: The Holiday Heist, and Geoffrey Tolwyn in the Wing Commander video game series.

Mad Mod has no superpowers, but he is a master of technological trickery and can control robots and holographic projectors with a ruby-handled cane. At one point he was able to use that particular cane to drain the youth of someone and make them big and himself young again. He also employs screens that use optically induced hypnosis to submit his victims to his will. Through his hypnosis and holograms, it looked like he could control both matter and the laws of physics. 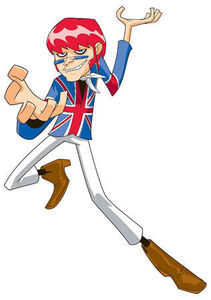 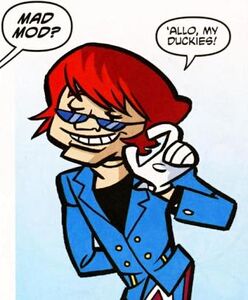 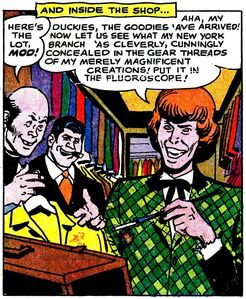 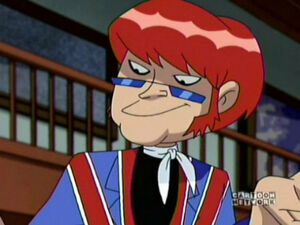 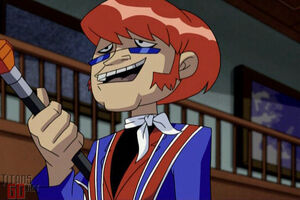 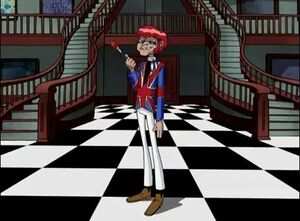 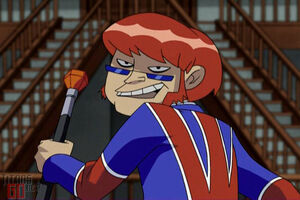 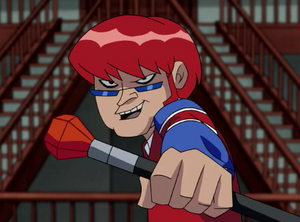 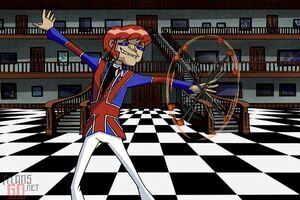 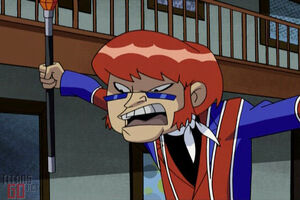 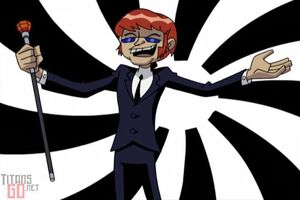 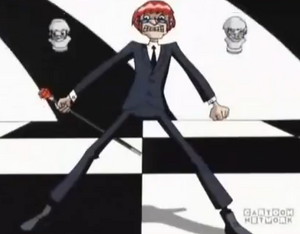 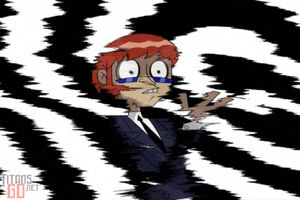 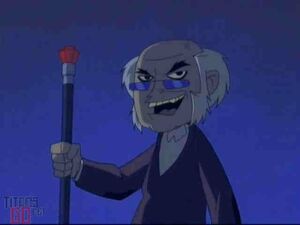 Mad Mod with his cane 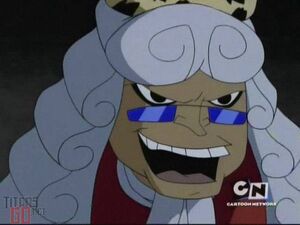 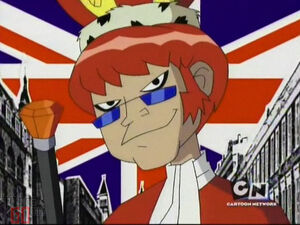 Mad Mod as a king 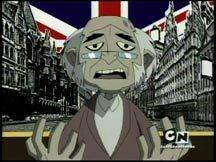 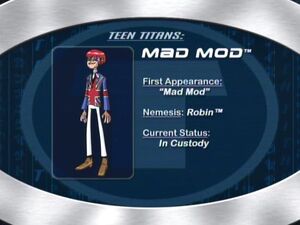