Immortality Seeker
Reality Warper
Mad Mod is a major recurring villain from Teen Titans Go!. He is a British centennial, who keeps himself forever young by stealing the youth of the youth with his magic staff. He also has the ability to warp reality and trap people into bizarre, twisted alternate dimensions.

He is voiced by Greg Ellis.

Mad Mod made his first appearance in "Salty Codgers", where he was in the form of his true, old man self. He walked up to a trio of cool young teenagers, who all made fun of him for being so old. Mad Mod got angry at them and cursed them with his magic staff. He stole their youth, turning them into grungy old senior citizens like himself. He then went on to attack other random young people nearby, turning them all into smelly old hags. Mad Mod absorbed the youth of everyone he victimized and kept it for himself, aging him back down to a fairly youthful man in the prime of his life.

The Teen Titans showed up to stop Mad Mod but when they did, Raven exhibited a strange obsession with the old people that Mad Mod had just created, as she thought they were cute and adorable. Raven started hugging and kissing the senior citizens, much to the disenchantment of the other Titans. Mad Mod opened a portal to another dimension and lept into it. The Titans all chased after them, getting themselves sucked into a weird, trippy, British-themed alternate reality, where everything was animated differently and overall, completely crazy looking. After a crazy, acid trip of the Titans chasing Mad Mod through this wacky world, Mad Mod finally opened another portal, that led them all back to reality.

When Mad Mod and the Teen Titans got out of the portal, four of the Titans were crushed under a giant teacup, while Raven had luckily gotten out of the way. Meanwhile, Mad Mod dropped his staff, when hitting the ground, rendering him powerless. The Titans urged Raven to keep the staff away from Mad Mod before he could get it back, but Raven saw this as an opportunity to let Mad Mod turn the Titans into "the most adorable thing ever", she kicked the staff over to him and made it look like an accident and made an intentionally pathetic and fruitless attempt to stop him. Mad Mod zapped the other four Titans, turning them into old people and got away with his crimes, much to the joy of Raven.

In "The Streak", Mad Mod was one of the villains to be defeated by Kid Flash.

In "Teen Titans Go! to the Movies", Mad Mod made a brief cameo, during Robin's song "My Superhero Movie". 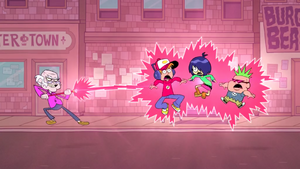 Mad Mod stealing the youth of the youth. 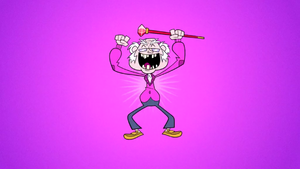 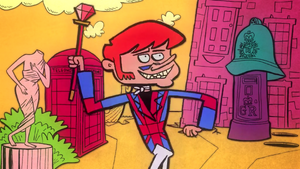 Mad Mod in one of his warped realities. 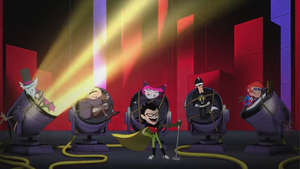 Mad Mod's cameo in "Teen Titans Go! to the Movies".