Exact revenge on personnel of Section 13 for transforming him (when he still had a rationale).

Kill people unfortunate enough to run into him. (as his mind continues to regress; succeeded until Spike Spiegel stopped him).

Tongpu (also known as the Mad Pierrot) is a one-shot villain in the anime series Cowboy Bebop. He is a psychotic and murderous assassin who seeks to kill anyone who is in his way.

Originally a normal human, he was driven insane by an mysterious experiment, which turned him into a monster with the mind of a child.

He was voiced by Banjō Ginga in the Japanese version, and Kirk Thornton in the English dubbed version.

Tongpu was subjected to numerous mysterious experiments in a laboratory, resulting in superhuman abilities including the ability to fly, greatly enhanced strength and speed, and a personal shield that stops any high kinetic energy object. The results of the experiment were deemed a failure. He possessed these attributes, but the intense agony caused by experiments also warped his mind into a child-like state. Because of the potential danger he posed to himself and others, he was sent to be quarantined in a hospital where he would be held indefinitely.

Due to the continued deterioration of his sanity from the memory of the experiments, his mind finally breaks. He slaughters the scientists and all staff members and escaped from the hospital. He acquired several high tech weapons and set out to kill all high-ranking ISSP officials, who were responsible for authorizing the experiments performed on him. He also relentlessly hunts down and kills anyone who catches even a single glimpse of him. As Jet's friend Bob notes, nobody who has ever seen his face has lived to tell about it. He is a deadly assassin, but has the mental capacity of a small child which leads to his eventual downfall. Facing Spike at an amusement park, Spike finally manages to injure him with a knife in his leg. Pierrot then decends into a child like tantrum and cries for his mother. Shortly after, he is crushed by a giant parade robot. 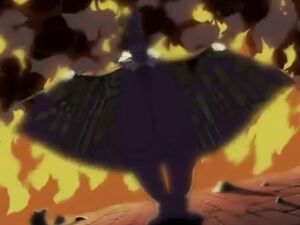 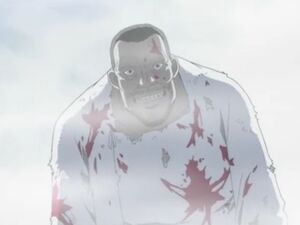 A young tongpu after killing the facility and escaping from it. 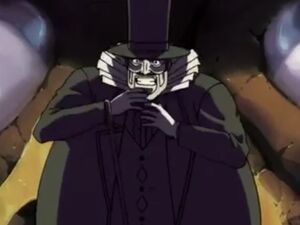 Add a photo to this gallery
Retrieved from "https://villains.fandom.com/wiki/Mad_Pierrot?oldid=4338666"
Community content is available under CC-BY-SA unless otherwise noted.