Headmistress of the Academy of Evil.

Abusive Monger
Madame Amberly is a character from the Crash Bandicoot game series. She is the overarching antagonist of the game Crash Twinsanity and one of the two overarching antagonists of the franchise as whole (Along with Uka Uka) (Assuming she's still canon in the post-Crash 4 continuity). She is the headmistress of the Academy of Evil and torments, harasses and bullies the children of her school, and refers to Dr. Neo Cortex as a "cry baby". Her former students include Dr. Cortex, Dr. Nitrus Brio, and Dr. N. Gin.

She serves as the main antagonist of the Academy of Evil levels in Crash Twinsanity.

Little is known about her character, besides the fact that she seems to be cruel and terrorizing towards her own students. Her school has little to no safety and its full of mutants and robot guards. Her academy is meant to turn children, human or not, into evil and ruthless people. Cortex has no positive memory of her and he is still terrorized to see her as an adult. When his niece Nina was showing too many signs of becoming a nice person, Cortex sent her to Amberly's Academy of Evil, so that she could be turned into a more insane and cruel child. Apparently, Amberly's school has been successful enough (however it's still stated that Nina can't resist cute animals).

Crash and Doctor Cortex arrive with an airship at the Academy of Evil as intruders, with the purpose of find Nina and bring her to Cortex's lab. After various fights against Madame Amberly's security in the school, Cortex and his group are ready to flee. Before Cortex can leave the room with the huge organ, Madame Amberly surprises Cortex and mistakes him for a student. She quickly recognizes him and believes Cortex found employment as a barber because of his scientist suit, to which Cortex fearfully replies that he is an evil scientist. Amberly states that to her, he will forever remain a little vermin. Then she attacks Cortex and the two fight. She can be defeated when the ropes attached to her back are shot off, causing her to fall onto the floor, never to be found again in the game (apart from a cameo inside Evil Crash's house).

Madame Amberly is mentioned only once in this game. After Cortex punishes Nina by sending her to his own chaotic and insane Evil Public School in the frozen mountains east of Wumpa Island, Nina laments the old times when she was Madame Amberly's student.

Portraits of Madame Amberly and her students appear on the racetrack "Nina's Nightmare", which was first introduced during the Spooky Grand Prix event. 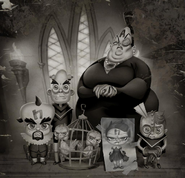 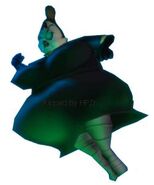