Capturing and sell Pokémons.
Caring about her son.

Have the Mew's DNA and use it to make a clone (succeeded).

Madame Boss (also known as Lady Boss in the Japanese version) is the posthumous overarching antagonist the Pokémon anime series. She is the founder and former leader of the notorious organization Team Rocket, bent on capturing and exploiting Pokémon to take over the world.

She is also revealed to be the mother of Giovanni (who is also her successor as leader of Team Rocket), and only appeared in the radio drama The Birth of Mewtwo.

Nothing much is known about Madame Boss, other than her desire to capture and sell Pokémon for money and power. Despite her power as the leader of Team Rocket, the only Pokémon she desired to have was the legendary Mew. She manages to send her favored agent Miyamoto (the mother of future Team Rocket agent Jessie) to capture Mew, although Miyamoto ends up disappearing in a blizzard after her team finds a fossilized Mew eyelash. With the DNA recovered from the eyelash, Madame Boss gets her scientists to create a clone of Mew called Mewtwo.

However, Madame Boss had passed away by unknown causes during the creation of Mewtwo. Before her death, Madame Boss passed down her position to her son Giovanni, who takes over her remaining operations as the new leader of Team Rocket. Taking on his mother's legacy, Giovanni uses Mewtwo to capture hundreds of Pokémon for the organization, although this all ended up in failure when Mewtwo rebelled against Giovanni after learning that he was using him for his plans of conquest.

Her primary focus seems to be on making money. She cared for Giovanni until he was 17 and became the boss of Team Rocket. She talked about caring for her child with Miyamoto when Jessie was born. Madame Boss was one of the first people to hold her. She even gave Miyamoto a raise for working and taking care of her child.

Including her reaction to hearing a recording proving the existence of Mew, a creature that could bring Team Rocket immense fortune; she responds with the quip "Can we make a CD out of it?" However, she is considered to be an effective leader who is adept at her job. 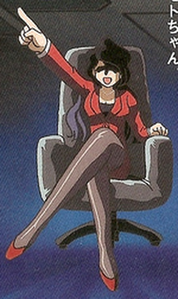