Leader of the Broodals.

Defeat Mario and feed him to Chain Chompikins (failed).

Madame Broode is the secondary antagonist in Super Mario Odyssey. She is the leader of a group of wedding planners called the Broodals that were hired by Bowser to plan the wedding of himself and Princess Peach. She is always seen with her pet golden Chain Chomp, Chain Chompikins.

Madame Broode is voiced by Yuki Kodaira, which she also voiced Hariet in the same game.

Madame Broode is an anthropomorphic white rabbit, like the Broodals. She is big and obese, and has a muzzle similar to Bowser. Her hair is mainly green, with a streak of yellow in it. She wears a red dress and a red hat, spiky golden wristbands, and a necklace where her Multi-Moon hangs.

Madame Broode is first encountered in the Cascade Kingdom when Mario and Cappy were searching for Power Moons in the area to restore the Odyssey, where she is found at the top of the falls. When she confronts Mario, she refuses to hand over the Multi-Moon hanging off her necklace, and decides to attack Mario to feed as a snack for her pet.

Madame Broode attacks by having her Chain Chompikins lunge at Mario. Chain Chompikins wears a pink hat on its head, which must be swat away by Cappy. Once the hat is gone, Mario can then capture and control the Chain Chomp. As Mario is trying to run away from Broode as Chain Chompikins, Madame Broode will attempt to knock Mario out of her pet. After a few attempts, she will grow tired, giving Mario an opportunity to send Chain Chompinkins flying at her. After being hit, she will do a spin attack which leaves Chain Chompikins immune to Cappy before returning to her usual attack pattern.

Mario must do this three times to defeat her. Once she is defeated, she drops the Multi-Moon, which Mario and Cappy used to restore the Odyssey and chase after Bowser.

Later in the game, she is encountered in the Moon Kingdom before Mario gets to Bowser's wedding. Here, she reveals herself as the leader of the Broodals, and attacks Mario again as vengeance to her previous defeat as well as the Broodals' defeat. Her rematch is identical to her first battle, but Chain Chompikins now wears three hats in this battle. Mario must repeat the same strategy used in their first battle by controlling Chain Chompikins and sending it at Madame Broode. After the second hit, Chain Chompikins wears five hats.

After the third and final hit, Madame Broode is defeated for good, and disappears. Returning to the Honeylune Ridge after defeating Bowser will respawn Madame Broode. 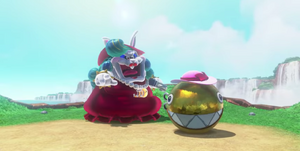 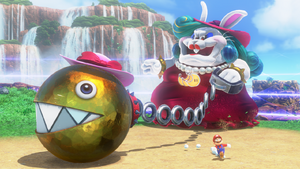