Become rich from the manual lace labor and make every girl in the string factory miserable (failed).

Madame LaCroque is a character in the Madeline franchise, making her only appearance as the main antagonist of the 1999 telefilm Madeline: Lost in Paris, along with her henchman Henri. She is a cruel and evil woman who kidnaps little girls and force them to make laces.

She was voiced by the late Lauren Bacall.

Madame LaCroque is seen to have long luscious golden blonde hair in her youth as a carabet star. Today, she is bald. Her attire consists of a purple dress/overcoat, and she wears a grey wig to cover her bald spot. She has a small scar on the left side of her forehead.

Madame LaCroque is basically best described as greedy, arrogant and completely evil. She abuses orphaned girls and forces them to manually make lace. Whenever the girls are slow or rebellious, she threatens to cut that girl's hair off and use it for lace. She also feeds the girls pale stale bread. She even despises the slightest ray of sunlight, stating that it "ruins the lace".

She's also rather uncaring and heartless. Instead of feeling sympathy for any who are sick, she heartlessly scolds Fifi who coughs because it ruins the lace, and sentences her to working on black lace in the dark. She even imprisons Madeline for defending Fifi.

LaCroque is also rather insane and has no qualms hurting children such as when she chases Madeline, while holding her pair of scissors in a potentionally dangerous manner.

LaCroque was once a cabaret star until one fatal night, she lost her fame by accidentally ripping her dress while dancing on the stage. Since then, she no longer performed because of her humiliation. She sold her hair to make lace since she had no money and started to own the lace factory.  She, along with a failed actor named Henri, even lied to the courts promising that they would take good care of the kidnapped girls, like Fifi, Violet, Roxy, Kelly, Susan, Patty, Heather Claire and Tanya.

When Henri brings Madeline to her factory, LaCroque and Henri plan to steal Madeline's family fortune while she works at the factory. Later, when she lines up the girls to give her the lace, she blames Fifi for her piece of lace being yellowed (due to her coughing, which was not her fault) and sentences her to making black lace in the dark. She then locks Madeline in the detention room for defending Fifi from her.

The next day, LaCroque gets upset when she sees that a mouse was ruining the lace (because Madeline had decided on sewing cheese onto it as a surprise for the shop) and finds that the girls have sewn calls for help on their pieces of lace.

When a customer claims she wants red lace, she looks for Madeline who, with the other girls' help, tries to escape through a high window. She keeps chasing after her and cuts some of her hair off.

Just when all seems lost for Madeline, she sees Pepito and the other 11 girls outside the window. Pepito lowers a fishing rod with his shrunken head from the Brazillian Ambassador attached to it. LaCrocque turns around and shrieks in terror and ducks, but the shrunken head knocks off her wig, causing the girls to laugh at her. LaCroque then falls over, and the key to her shop falls out of her pocket. Fifi grabs the key and unlocks the door and Pepito and the others burst into the shop, shortly followed by Miss Clavel and the police and a chase ensues. The girls tie LaCroque up with thread and lace and she kicks Henri (as the latter attempts to make his getaway), and they got arrested for the kidnapping. 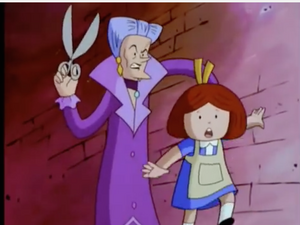 Retrieved from "https://villains.fandom.com/wiki/Madame_LaCroque?oldid=4254513"
Community content is available under CC-BY-SA unless otherwise noted.