Worshiper of the Old Gods
Commander of the League of E.V.I.L.

Madame Lazul is a recurring antagonist in the Warcraft spinoff Hearthstone: Heroes of Warcraft. She first appeared in Whispers of the Old Gods as a minor antagonist, narrating the trailer as she tells the player about the Old Gods. Lazul later reappeared in the story arc of the Year of the Dragon, helping Arch-Thief Rafaam call the other Hearthstone: Heroes of Warcraft villains and assemble the League of E.V.I.L.

Madame Lazul is an sinister fortune teller, and a troll priestess who worships the Old Gods. In the trailer for Whispers of the Old Gods, she sings a song to the player in Harth Stonebrew's tavern and comes across as very creepy and cryptic. Madame Lazul is very mysterious, and also manipulative, using trickery against heroes to help her summon monsters and making promises to her minions without following through on them.

Lazul's skills in plotting are exceptional, which is part of the reason why Rafaam calls on her to assemble the League of E.V.I.L., as she had the knowledge and information he needed to form his organization. While a member of the League, Lazul is completely loyal to Rafaam, but is willing to tell him when his plans are "dumb" (likely because he just stole Dr. Boom's plan and called it his own). In Rise of Shadows, she gets her first collectible card, where she literally reads the opponent's hand and Discovers one of their cards, showcasing her powers in seeing the future.

Whispers of the Old Gods

Madame Lazul only appears in the trailer of Whispers of the Old Gods as the narrator, playing a minor but pivotal role in the player's introduction to the creepy alternate reality. As a worshiper of the Old Gods, Lazul chuckles in amusement at the tale, but it's clear from her spooky silhouette that there is more to the story that she is not telling.

One night, Madame Lazul received a message from Arch-Thief Rafaam, who tasked her with scrying for the most devious and scheming villains she could find. Using her tarot cards, she summons each of the Hearthstone: Heroes of Warcraft villains, starting with King Togwaggle, then Hagatha the Witch, and finally Dr. Boom. When Rafaam arrives, he explains his intentions to steal the floating city of Dalaran, and together they form the League of E.V.I.L.

In the third chapter of The Dalaran Heist, Lazul leads the attack on Dalaran's streets, where she hopes to seize control of the merchant district. Lazul entrusts this task to Kriziki, a priestess arakkoa who used to work for the Kabal and who Lazul promises she will teach to fly. At the end of the chapter, Madame Lazul is pleased to have seized the markets and remarks that they will soon be reopened with new owners willing to support the League of E.V.I.L.

Madame Lazul does not play a major role in Saviors of Uldum, but is presumably still at large following the successful heist of Dalaran. In the card Activate the Obelisk, Lazul is shown seeking out the mystical power of the Obelisk's Eye, which helps to heal and buff her minions.

In Galakrond's Awakening, Lazul is known as Puppetmaster Lazul, and is either a playable Priest hero or a boss encounter, depending on if the player sides with the heroes or villains.

In the Explorers campaign, Lazul is fought by Sir Finley Mrrgglton, where she attempts to summon a monster from under Wyrmrest, an Old One known as Go'rath. Her Hero Power tells her opponent's Fortune and lets her discover a card from their deck. Alternatively, in the E.V.I.L. campaign, Rafaam sends Lazul to unfreeze and recruit frozen monsters, and has to fight the snow elemental Chenvaala to free Dragonslayer Skruk. 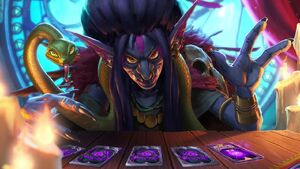 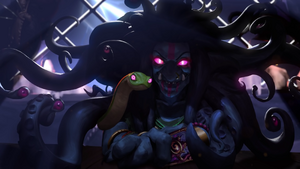 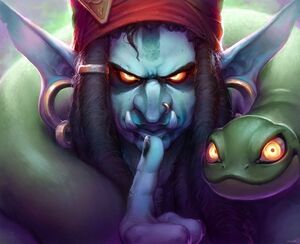 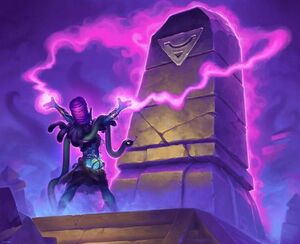 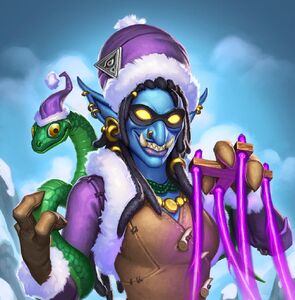 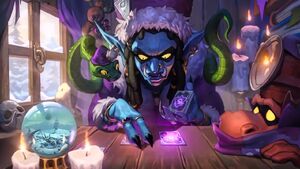 Lazul offers the choice between good and E.V.I.L. 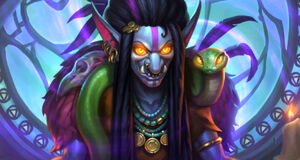