Fill the Mansion with ghosts.

Madame Leota is a major antagonist in the Disney Park attraction The Haunted Mansion, which appears in Disneyland in California, Walt Disney World in Florida, and Tokyo Disneyland, as well as its alternate version Phantom Manor at Disneyland Paris. She is also a major character in other Haunted Mansion properties, such as the Slave Labor Graphics Haunted Mansion comic book series, the Disney Kingdoms comic series, and Ghost Post, serving as an on and off antagonist.

Leota was a medium and powerful clairvoyant gypsy who fled Salem, Massachusetts during the time of the infamous Salem Witch Trials. She traveled as a wandering gypsy fortune teller, eventually settling near the mansion and opening a small store (which is a gift shop in Walt Disney World) called Memento Mori.

More of Leota's story was told in the comic book series The Haunted Mansion by Slave Labor Graphics, which ran for seven issues from 2006 to 2007.

In the greater storyline of the comic, Leota continued her wanderings around her store, until she happened upon the mansion and its master named William Gracey. He hires her to help him rid the mansion of ghosts, which are haunting the place and have been causing disturbances for some time. Leota spends much time at the mansion communicating with the spirits inside. However, during this time, she finds herself having fallen in love with Gracey. She makes many advances on the master, but is turned down due to Gracey's engagement to Emily de Claire. Leota angrily continues contacting the spirits, until she comes into contact with the ghosts of a pirate crew and their gunrunner, who reveal that Gracey used to be a pirate named Captain Blood, who murdered the first captain and took over the ship, eventually leading the rest of them to their deaths before retiring and settling down. Leota uses this knowledge to conspire with the ghosts, and summons them on Emily and William's wedding night. The ghosts then scare Emily to death.

Infuriated and vengeful, Gracey tracked Leota down, who was performing a séance to draw more ghosts to the mansion. Gracey found her and snapped her neck, instantly killing her. He then hung himself in the Stretching Room. Leota, however, went on to possess her crystal ball, not aware of her death. She continued to call spirits to the mansion using her summons, causing spirits to continue arriving throughout the years. Her body was buried in the cemetery in the front of the mansion, rather than the large graveyard.

In the ride, Madame Leota can be encountered, her crystal ball containing the apparition of her head, floating in the air with instruments circling around it. She continues to summon spirits with incantations.

Occasionally, Leota's spirit will travel to her old store Memento Mori, where her reflection can be seen in mirrors. She will also occasionally manipulate or possess her own tombstone, causing the face carving's eyes to open, revealing human-like eyes underneath. She will look around at the guests before leaving the tombstone and returning it to normal.

In the Phantom Manor at Disneyland Paris, Leota can be seen, summoning ghostly figures to a wedding that will never take place. However, this wedding is different from Emily and William's, and tied to the storyline of the Phantom Manor, so it is unknown what Leota's connection is with the manor or the story.

Madame Leota appears as a major character in the Haunted Mansion miniseries of the 2016 comic book series Disney Kingdoms by Marvel Comics. Here, she is a more benevolent character. After Captain Bartholomew Gore places a curse on the mansion, she uses her powers to call protagonist Danny Crowe to the mansion, believing he can help break the curse and free the other ghosts. She gives him advice and helps him, also revealing that, because she is one of the few ghosts to have actually died on the property, she has power and authority, with her ability being increases psychic and supernatural powers. After her crystal ball is shattered by Gore, Danny is able to end the curse, and she re-manifests.

Leota plays a major role in the interactive mystery game Ghost Post. After an event known as the Great Unraveling traps all of the ghosts in the mansion, the Committee of Wandering Ghosts is formed to seek the help of mortals on the outside. Leota is shown to be opposed to this, not liking the idea of associating with the living. She makes a few contacts with guests, sending them puzzles that will challenge their psychic abilities. If they pass, she will begrudgingly accept their help, and becomes something of a guide as she gives clues and hints to help guests solve the mystery and help the ghosts. If players succeed and find the incantation to end the Great Unraveling, she will thank the players and recognize them as worthy mediums.

Madame Leota has made a few cameo appearances in House of Mouse, and a brief appearance in Mickey's House of Villains.

In the Kingdom Keepers book series by Ridley Pearson, Leota is part of an organization of Disney villains known as the Overtakers, who try to breach the real world and take over the Disney Parks. When the protagonists come to the Haunted Mansion in the seventh book The Insider, she attempts to scare them to death. However, the heroes retaliate with a mirror, and Leota flees from the sight of her own wrinkled and horrific face.

A ghost bearing the same appearance as Madame Leota called Madame Leona appears in Lonesome Manor's library. She is upset that the Lonesome Ghosts have stolen her books, which Mickey can retrieve for her.

Leota appears in the 2003 live action film, played by Jennifer Tilly. Here, she is a cryptic and mysterious ghost, but is on the side of good. As the story does not connect with that of the ride, she is an encouraging and clever woman who only briefly antagonizes protagonist Jim Evers before aiding him in stopping the film's real villain. 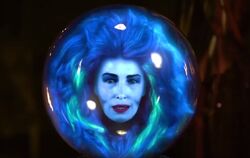 Madame Leota is a minor antagonist of the TV series Once Upon a Time, appearing in the Season 7 episode "Secret Garden'". She was portrayed by Suzy Joachim.

Madame Leota is a witch and self proclaimed Maestro Medium. She is recruited by Mother Gothel to join the Coven of the Eight, but their plans are thwarted by Zelena and Wish Hook.

Leota appears as a major character in the 2003 video game, which has no connection to the story of the ride or movie. Here, she was a normal ghost on the property until she rebelled against the villain, Atticus Thorn, who, in turn, trapped her inside a crystal ball. She calls upon the help of the protagonist Zeke Holloway, and gives him his weapon, the Beacon of Souls. She then follows him as a guide until Thorn is defeated, to which she stays in the mansion and helps the other ghosts.

Leota makes a cameo in the Star Wars ride Star Tours at Disney Parks, with her crystal ball being seen in one of the suitcases going through luggage scan.

Leota appeared in a Disney XD station ID, where she encounters Pony Head and Star Butterfly from Star vs. the Forces of Evil.

Madame Leota is generally surrounded by mystery. Her motives tend to be vague, though a lot of interpretations tend to lean towards her being good or at least a neutral force. She generally favors speaking in rhyme as her incantations seem to be based around it.

Madame Leota is an old woman with long, flowing blue hair inside a spherical crystal ball. In some recent versions, she has been portrayed as much younger and, in some cases, quite beautiful. Everything inside the ball is tinted blue.