Luring men into her room and killing them.

Madame Lorraine is the main antagonist of the 2010 short animated film DC Showcase: Jonah Hex. She is a serial killer that poses as a prostitute and lures men into her room and kills them, occasionally looting them for money. She is defeated by Jonah Hex and is left into a caved in lower shaft with the men she killed. It is presumed that she later died of starvation due to the spot where she disposed of the bodies was far away from any nearby town.

She was voiced by Linda Hamilton.

Red Doc arrives looking for more booze and more action. Madame Lorraine spots him, and kills him, takes his money and has two of her henchmen dispose of the body. Hex manages to knocks her out, then kill her henchmen. He shot at the bartender, whom he kills. He then demands that Lorraine tell him where Red is.

Lorraine and Hex journey down, revealed that Lorraine has murdered at least fifteen men.  Lorraine tries once more to kill Hex, who  comes to just as Hex reaches the top and kicks down the rope trapping her there. Lorraine  tells Hex he can't leave her. Hex says she has plenty of companions whom she knows, then departs. Lorraine stares at the dead bodies, leaving her trapped in the dark. 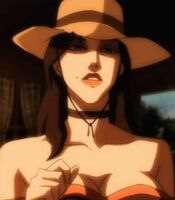 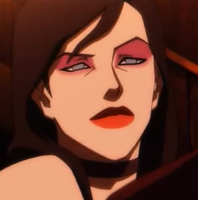 Madame Lorraine being stopped by Jonah Hex.
Add a photo to this gallery
Retrieved from "https://villains.fandom.com/wiki/Madame_Lorraine?oldid=3557941"
Community content is available under CC-BY-SA unless otherwise noted.