Madame Masque (real name Giuletta Kristina Nefaria) is a supervillain in the Marvel universe. She is primarily an enemy of Iron Man.

Giuletta's mother had died in childbirth. Her father, Count Luchino Nefaria had her sent to the Frost family in order to give her a 'good life', and partially because he had preferred a male heir instead.

After revealing her true parentage, Whitney was forced to work for her father. She became the leader of the Maggia under the codename "Big M". She attempted to infiltrate Stark Industries using her charms to seduce SHIELD agent Jasper Sitwell. Her plans went awry as she actually developed romantic feelings for Sitwell. Her plans also further fell apart as she was involved in an accident and her face was permanently disfigured. She became affiliated with Mordecai Midas and acquired a golden mask to cover her scarred face. This resulted in another code name for her: Madame Masque.

In a far fetched scenario, Midas captured Anthony Stark, believing him to be an imposter and an incredible look-alike, and ordered Nefaria to train Stark and infiltrate Stark Industries and replace its current leader (actually a Life-Model Decoy of Anthony Stark deviating from its original progamming), to return control of the company back to Midas. The plot failed. However, Nefaria began to develop strong feelings for Stark who insisted that the mask she wore was not an obstacle for him to overcome. Nefaria and Iron Man were involved in several adventures. However, Nefaria still held strong feelings for Jasper Sitwell. When she told Iron Man her feelings for Sitwell, Stark moved on with is life, soon becoming engaged to Marianne Rodgers. At this time Sitwell was also severely injured by Spy-Master, hovered near death and went through a grueling rehabilitation. Sitwell and Nefaria also drifted apart. Sitwell was also removed as SHIELD liason to Tony Stark due to his injuries.

Many months later, Midas again sent Madame Masque to infiltrate Stark Industires, posing as his new secretary Krissy Longfellow. However, she fell in love with Stark despite the fact that Jasper Sitwell had been reassigned to safeguard Anthony Stark again. Stark and Nefaria became very close, sharing a penthouse apartment in Manhattan. However, when her father Count Nefaria faced grave illness, she returned to her criminal ways. She helped capture Stark with the help of the Ani-Men in an attempt to coerce Stark into curing her father's ionic induced, life-threatening aging. Stark escaped Nefaria's plot and steadfastly refused to release her father from incarceration. Masque responded by battling Iron Man with weapons from Stark International. In the ensuing battle Count Nefaria was believed killed. This was the final straw for Giuletta, as she left Stark and soon returned to her criminal mastermind ways.

Nefaria was incensed when Stark soon began a relationship with Bethany Cabe. Among other plots against Stark, she also attemped to murder Cabe. She also told Cabe of Stark's secret identity as Iron Man (which Cabe had already deduced on her own). While later working with Obadiah Stane, Masque temporarily had her mind switched with Bethany Cabe's. Her assassination attempt on Stark was averted, and their minds were switched back.

Count Nefaria has since been resurrected. After he reorganized the Maggia, agents were sent to find Whitney. She appeared to commit suicide with an exploding facemask.

However, Whitney had created several clones of herself. She became intensely paranoid. In this state, she repeatedly ordered her clones to be killed and replaced by more duplicates. Several of the bodies were found and identified by Iron Man (Tony Stark). One of her clones, Masque, briefly helped the Avengers during Immortus's machinations known as the Crossing.

Another Masque appeared to assist the Avengers and Thunderbolts against Count Nefaria's plot to bombard the world with a massive ionic bomb. Stark believes it was the real Whitney. It is speculated that the other Madame Masques who were killed were all cleverly constructed clones.

Madame Masque was hired by the Hood to take advantage of the split in the superhero community caused by the Superhuman Registration Act. She became the Hood's second in command and helped him and his followers in the fight against the New Avengers but was taken down by Doctor Strange and taken into S.H.I.E.L.D. custody.

Prior to the Skrull invasion of Earth, when Madame Masque was taken into custody by S.H.I.E.L.D., a group of Skrulls disguised as S.H.I.E.L.D. agents were trying to learn her true face so they could replace her. The Hood freed her and killed all the Skrulls except one who he took for interrogation. Attended by most of the Hood's army, they learned from the Skrull agent that the Skrulls planned on taking over Earth, believing it to be rightfully theirs. The Skrull agent died from the injuries received under torture. Another infiltrator, in the guise of the criminal Slug was exposed moments later and killed.

At the climax of the Skrull invasion, Madame Masque was amongst the rest of the Hood's crime syndicate as they assisted the heroes in their final battle against the Skrulls.

Following the events of the invasion, Madame Masque was part of a surprise attack on the New Avengers, a trap set up by Norman Osborn. Later, when The Hood attacked Doctor Strange in order to become the Sorcerer Supreme, she tried to help him deal with his possession by Dormammu, taking off her mask and confessing her feelings for him.

Using the power of the Reality Gem, the Hood came to Madame Masque and healed her scars, making her face normal.

When Count Nefaria, her father, was injured in a conflict with Moon Knight, he recruited Masque to take the head of Ultron from him. Despite a strong effort, Masque failed and was defeated by Moon Knight. 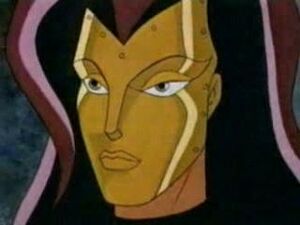 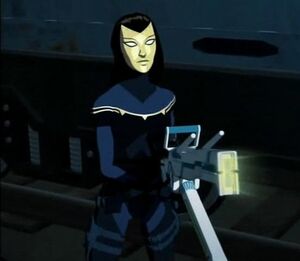 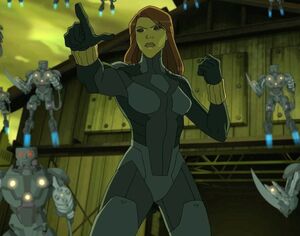 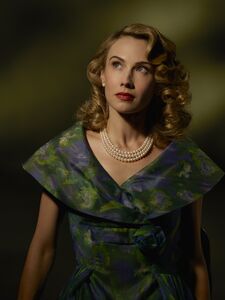