Student at the Tomorrow Academy

Vengeful Supervillain
Whitney Stane, better known as Madame Masque, is a major character and in many cases an recurring antagonist in the TV series Iron Man: Armored Adventures. She is the daughter of Obadiah Stane.

She was voiced by Kristie Marsden.

Whitney Stane first appears in "Field Trip", where she visits her father. She helps Tony get out to Stark Tower without too much problems when he gets surprised by Obadiah. She then makes a second appearance in Episode 10, Ready, A.I.M., Fire, where it is revealed that Pepper has a certain dislike for her. She saves Tony's life when the Controller takes over Rhodey, Pepper, Gene, and Happy, and uses them to try to kill Tony. She also reveals that her father sent her to the Tomorrow Academy to spy on Tony, yet took the position just to be closer to Tony, as she really likes and cares about him a lot and considers him her only real friend in the world.

She first appears as Madame Masque, and begins impersonating her own father in order to cause him trouble by destroying his art gallery and his private garage at the pier. When Iron Man discovers her (though both are unaware of each other's identity) and threatens to call the police, she copies her appearance and impersonates him as a thief, causing him to be wanted by the police. After her father ignored her, again, Whitney decided that if making him losing the things that he loves doesn't free up some time with her, then she'll get rid of everything else, including Iron Man.

Madame Masque fights Iron Man at the trainyards, however; when she attempted to kill him, she accidentally changed faces in front of the police, forcing her to run. She barely catches on to the ledge of a building and as Iron Man approached her, her mask fell off, revealing her face as the daughter of Obadiah Stane. Not wanting his good friend to go to jail, Tony/Iron Man let her off with a warning.

In time, Madame Masque resurfaces and poses as Tony Stark to go on a rampage. When Iron Man catches her, Madame Masque tells her that she was only doing it because an assassin named the Ghost was paid to kill Tony Stark. Whitney suspects that her father had hired the Ghost to do so for him. When Whitney ends up captured by Ghost, Rhodes (posing as Tony with her mask) manages to free her while Iron Man fights Ghost. Whitney manages to use some of her father's money (ten million dollars) to have Ghost leave the real Tony alone.

Whitney becomes Madame Masque once more in where she impersonates an officer to tell the police to wait outside the Tong building. Then, she reluctantly poses as Gene Khan to get Pepper out of the building.

Eventually, the constant use of her mask caused damage to her brain, making her hallucinate that Obadiah is trying to kill Tony, leaving her ill, delirious, and later, dangerously insane. She walked out of her medical suite retrieved her mask and weapons. She took care of Stane's security and went after her father. When she found Blizzard, she started fighting him and Iron Man defeated him. But when she found Obadiah, she almost shot him, but Iron Man knocked him unconscious with a sonic burst. He tried to calm her down by telling her his secret identity, but Whitney was still hallucinating and tried to shoot him and he knocked her unconscious too and used the metal in his heart to make a cure. When she woke up, further brain damage resulted in her losing her memories just before becoming a student of the Tomorrow Academy, as well as her identity as Madame Masque and Tony as Iron Man, permanently.

In the second season, Whitney and Tony Stark develop a deep and strong romantic relationship and start dating, much to the envy and jealousy of Pepper Potts. It seemed to go well, but Tony's duties as Iron Man cause him to blow off their romantic dates. Eventually, they decided to stay just good friends on a platonic level.

When Obadiah Stane was fired from Stark International, thanks to Tony, and stole the Iron Monger mech to destroy Iron Man, Whitney begged him to stop. But when it malfunctioned, it went on a rampage and almost killed her. The result left Obadiah comatose. Whitney angrily blamed Tony for his condition and ignored his apologies, angrily saying that he did not know what "Sorry" meant but would in time.

Afterward, Whitney is now giving Tony the cold silent treatment when they're at school, much to the disappointment of Tony.

After Stane was put into a coma, Whitney started to remember everything from the past. She re-dons the identity of Madame Masque and goes on her revenge spree. She takes her father's comatose body and poisons Howard Stark. Tony tries to find an antidote, but Whitney anonymously blackmails him with an antidote. She wants Tony to come to the Monger facility without his armor. Tony finds the antidote in plain sight and is attacked by flying drones, luckily he uses Extremis to put on his armor, destroys the drones, and escapes with the antidote. He is then attacked by Iron Monger. When Tony stops it with Extremis, he finds Madame Masque and fights her. Whitney had him at her mercy with the antidote in her hands, but she couldn't finish him off and ran away. Iron Man traps her in a force field, but threatens to drop the antidote if he doesn't let her go. She gets away to a secured place with her father, but Iron Man tracks her down. He apologizes to her as S.H.I.E.L.D. vehicles surround the place. They take her away to a prison cell, but the end implies that she escaped while imitating a S.H.I.E.L.D. agent. 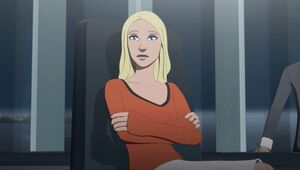 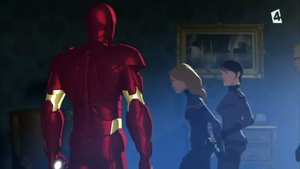 Whitney arrested by the Shield. 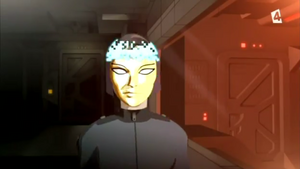 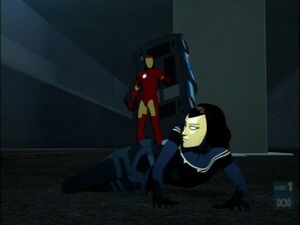 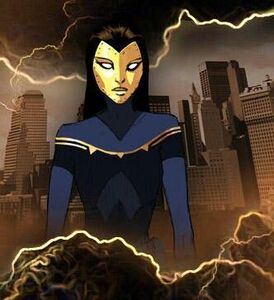