Mastermind of the Night Monster

Pretending to be a soothsayer.

Get rid of all the mice.

Madame Mousey (pronounced "Moo-say", despite its spelling) is the main antagonist of An American Tail: The Mystery of the Night Monster, the fourth and final sequel to the classic American Tail.

She is a miniature French poodle who has started living among the mice about this time, appearing at every crime scene where the Night Monster has struck, claiming to be a fortune teller. She is also the mastermind behind the night monster all along. Angered by being mocked by others for being compared to mice due to her miniature appearance, she leaves her privilege life as a pet and teamed up with a group of poor cats living in the sewers, the Outlaw Cats, led by Twitch, to create a machine, the titular night monster machine, to kidnap all the mice in Manhattan and bring them to the sewers to be eaten by the cats. However, her plan was foiled by Nellie Brie, Fievel Mousekewitz, and their friends. Madame Mousey serves as the archenemy of Nellie Brie.

She was voiced by Candi Milo.

Madame Mousey is a psychotic, intelligent, scheming, manipulative, and villainous poodle who has a hatred towards mice because she despises being compared to them. She faked being a soothsayer to get money from the mice. She created the Manhattan monster to get rid of the rodents because when she ran away from her owner, the other dogs didn't want to be around a dog who looks similar to a rodent. She snapped and got cats to help her make a monster to wipe away all the rodents of New York. She locked them in crates and sold them to cats to be eaten. Madame Mousey abuses her own minions, especially Twitch, during her villain song. This shows that she does not even care about her own minions and was just using the cats for her own selfish purposes.

Despite her crimes though, there is a touch of sympathy to her as she is very insecure about her size and looks due to the fact that she has been relentlessly compared to mice and rats and being rejected by her fellow canines.

Before the events of the movie, Mousey was the pet of a wealthy heiress. However, she was unsatisfied of her life of privilege, preferring to be wild, not to mention that any passerby who looked at her compared her to a mouse or a rat, which made her very insecure about her looks and also gave her a superior hatred for rodents. It gets to the point where she abandons both her life and owner when said owner decides to move away from their old mansion in order to achieve the life as a wild stray. However, when she attempts to join the Dog Council in Central Park, she was turned away on account of her rodent-esque appearance, calling her names such as "powder puff". After that, Mousey became bitter and resolved to assuage her insecurity by ruling over mice, eventually meeting up with a gang of criminal cats and becoming their leader in exchange for getting them past the mice's defences.

She first appeared telling supposed "fortunes" that when, in truth, what she was telling was obvious, such as when she said a mouse was in great pain because she saw he had a cast on his leg. She despises Nellie Brie for doubting the Night Monster exists.

She later appeared in the sewers meeting her henchmen, a group of cats. The leader of the cats, Twitch, starts taunting her about being shunned by the other dogs because she looked like a rat, but she countered by telling the cats that she was the reason that the cats even had food to eat because she had invented the Night Monster.

She then lured Fievel, Nellie, and Toni to her old, abandoned house with supposed clues about the Night Monster, only to ambush them with the robotic monster. Just as they are about to catch Fievel and Nellie, Toni crushes the robot with a chandelier.

The cats turn on Mousey, as they can get into the mouse's village, but Mousey warns them that the mice will know they are there and lose the element of surprise. The cats kidnap Fievel's father, mother, and baby sister, and have them locked in cages with dozens of other mice. Then Nellie, Fievel's big sister Tanya, and Reed appear and she reveals that she had been compared to a rat for a long time by other dogs and that she had escaped from her owner and planned to get rid of the mice as revenge. However, Fievel appears from behind and electrocutes her, knocking her out. After her henchmen are defeated, she is returned to her owner as a comeuppance for her crimes. 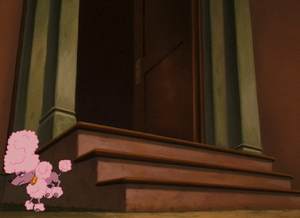 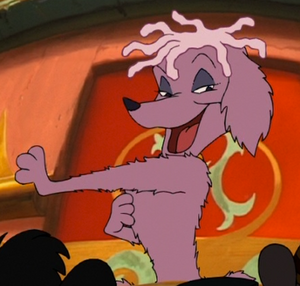 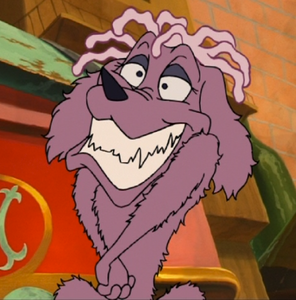 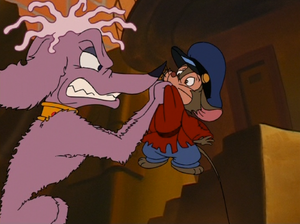 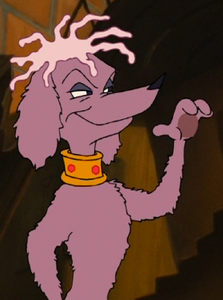 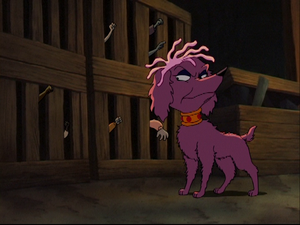 Madame Mousey with the captured mice 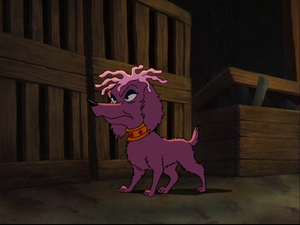 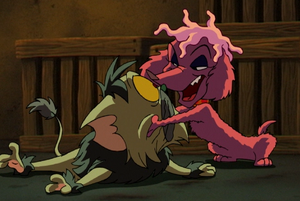 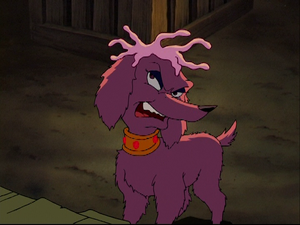 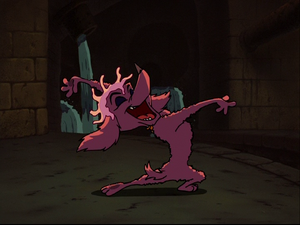 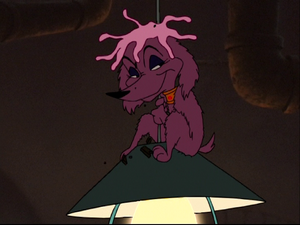 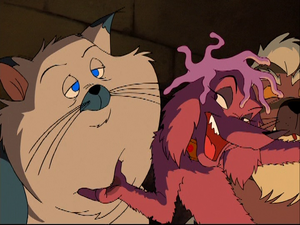 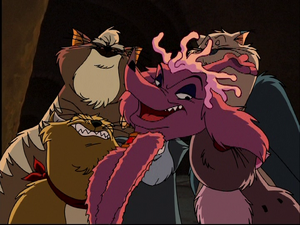 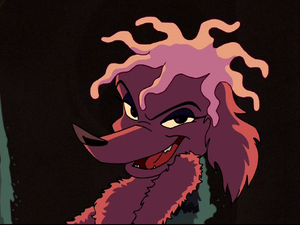 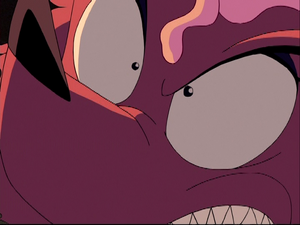 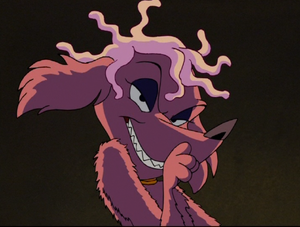 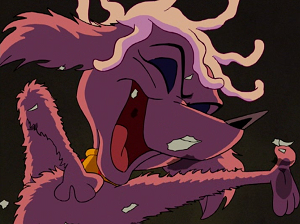 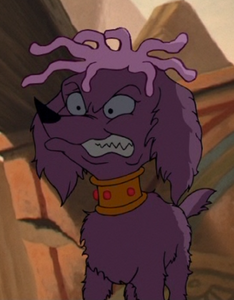 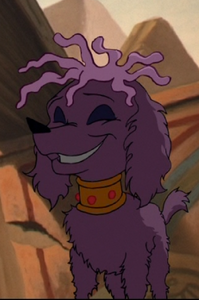 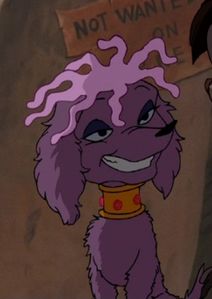 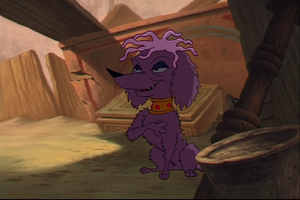 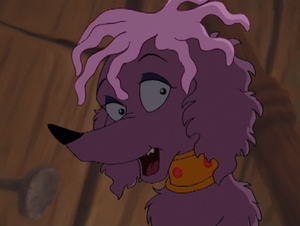 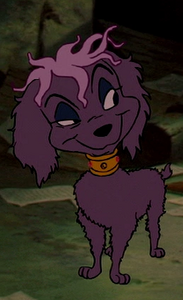 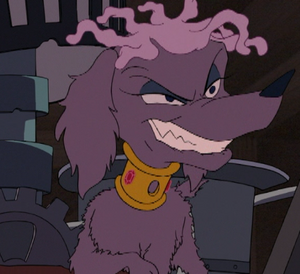 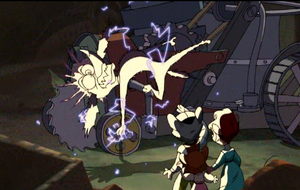 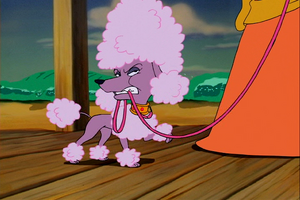 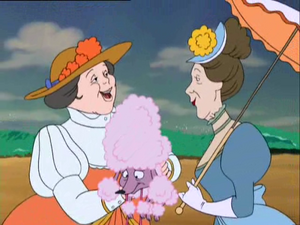 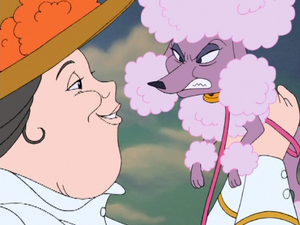 Mousey and her owner