Rogue
Whatever She Shape Shifts Into

Destroy the Teen Titans
Replace pizza with pierogi and borscht

Usurper
Madame Rogue is a major recurring villain from the Cartoon Network imported series, Teen Titans Go!. She is an evil shapeshifting Russian woman, who works as a member of The Brotherhood of Evil.

She was voiced by Hyden Walch who also voiced Blackfire.

In "Beast Girl", Madame Rogue shapeshifted into Robin of the Teen Titans and stole all the pizza from Jump City, by breaking into a pizza factory and reversing the conveyor belts so that all the pizza would come to her. When The Teen Titans came in, they were confused as to why there were two Robins. The real Robin pointed out that the other Robin was clearly an imposter, but the other Robin grabbed the real Robin and flipped him around, so they would get mixed up.

The Teen Titans tried to figure out who the real Robin was by asking him a question that only the real Robin would know. Starfire asked one of the Robins what her favorite color was and he guessed purple. Starfire punished him for this because she didn't have a favorite color. The Titans beat the snot out of this Robin, only to later realize that he was the real one, which they could tell based off of his unmistakeable screaming in pain. The fake Robin beat up the real Robin as though he were the real Robin. Once the Titans finally figured this out, they got on the fake Robin's case and demanded him to reveal his true identity. At this point, the fake Robin could no longer keep up the charade, so he gave it up and proved himself to actually be Madame Rogue.

Madame Rogue explained that her evil plan was to rid the entire world of pizza, which she deemed to be disgusting and sloppy and replace it all with the classier and fancier food, pierogi and borscht, which the other Titans thought was a repulsive and reprehensible replacement for such a wonderful food, that the world has come to enjoy so much.

The Teen Titans fought with Madame Rogue and during their fight, Rogue would take on the form of various different Titans. Every time the other Titans tried to guess which one was her, they would always attack the original, allowing for Madame Rogue to eventually turn the Titans against themselves and bring themselves to the ground.

After bringing the Titans to weakness, Madame Rogue turned into a giant cannon and blasted all of them out of the building.

Since this happened, the Teen Titans had to search and investigate everyone in Jump City to find who and where Madame Rogue was.

Much later on in the episode, Madame Rogue revealed herself to be in disguise as the couch in the living room of the Titans Tower, proving to have been hidden right under the Titans' butts the whole time. This grossed out Raven as now she knew she'd been putting her butt in Madame Rogue's face for a long time, despite it being more logical to assume Madame Rogue would be the one being disgusted. Before the Titans even had the chance to ti fight back, Madame Rogue grew her hand out really big and caught the Titans and ran away with them.

Madame Rogue took the kidnapped Titans to her onion dome, where she trapped them all in Matryoshka dolls. Now that the Titans were all immobilized, she could finally carry out her plan to rid the world of pizza and fill the world with pierogi and borscht. Just then, The Opposite Gender Titans busted in and fight Madame Rogue. They beat her up and knocked her out of the building, saving their genderbent friends. 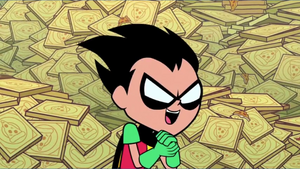 Madame Roque in the form of Robin. 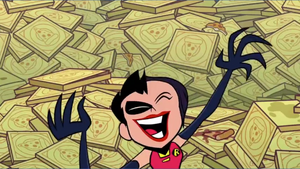 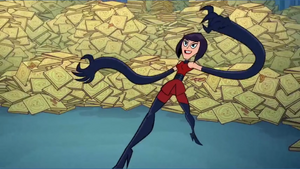 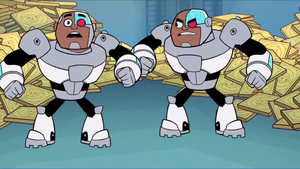 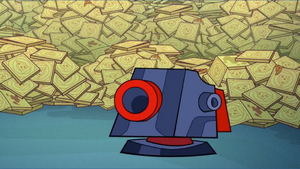 Madame Rogue can transform into objects too. 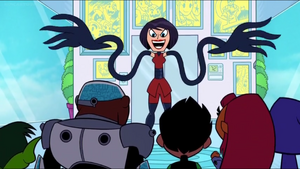 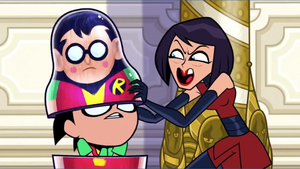 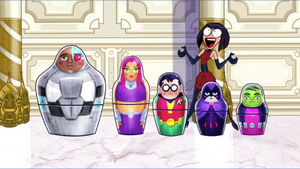 The Titans were trapped in Matryoshka dolls.