Madame Rouge is an antagonist from DC Comics.

Laura De Mille was a French stage actress until she attracted the notice of The Brain and his associate Monsieur Mallah. With Mallah's help, the Brain performed surgery on De Mille that was, from his perspective, successful, sublimating her good personality and allowing her evil personality to remain dominant.

Later, Rouge's split personality manifested again, with her good personality occasionally appearing. Rouge was romantically linked to the Doom Patrol's leader, Niles Caulder ("The Chief"), who was able to help Rouge overcome her evil side and ally with the Doom Patrol.

Even before she gained her powers, Madame Rouge was a deadly opponent for the Doom Patrol. Originally a beautiful French actress named Laura De Mille, this mad mallable mistress was born out of a car accident that gave her a split personality, something the Brain and Monsieur Mallah used to their advantage.

Recruited into the Brotherhood of Evil, Madame Rouge was a ruthless adversary for the Doom Patrol. To make her able to match their abilities, the Brain performed an experiment on Rouge, giving her the power of super elasticity, and shape shifting abilities. The Doom Patrol's leader, the Chief, the man she was secretly in love with, tried to help her fight her evil side, but alas, it was too strong, and she turned on the Brotherhood. In the original DP's last adventure, Rouge and her associate, General Zahl, seemingly murdered both groups and got away with this horrific deed (although Robotman, Negative Man, the Chief, and the Brotherhood all survived with the exception of Elasti-Girl) or so they thought. Years later, Rouge met her end at the hands of Elasti-Girl and Mento's foster son, Beast Boy, when he killed her in battle, avenging Elasti-Girl's death.

Elastic body (similar to Elastigirl and Mister Fantastic) and shapeshifting (similar to Mystique). 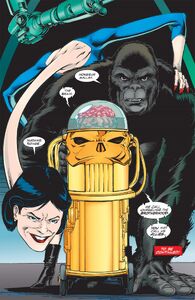 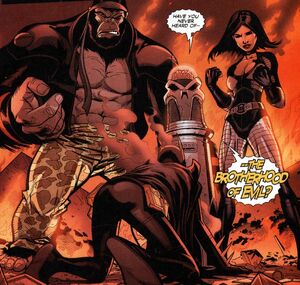