Madame Rouge is one of the two secondary antagonists of the final season of Teen Titans.

She is voiced by Hynden Walch (who also voices Blackfire, Argent, and Starfire from the same series).

Madame Rouge, though appearing mainly as a black-haired Russian female dressed in red (in fact, one rough translation of her name is "The Lady in Red"), is a malleable shape-shifter with the ability to stretch and contort her body in any way she sees fit; she is most lethal for being able to fully assume the appearances of other people, able to mimic them with little means of detection. She nearly defeats Kid Flash simply by pursuing and pummeling him into exhaustion, but later succeeds in taking down Hot Spot, taking his likeness as the Titans arrive to pass along a communicator to him. In possession of a Titans Communicator, the Brotherhood is able to coordinate their strikes against the team.

As the Titans' counter-strike threatens the Brotherhood's defeat, Madame Rouge attempts to flee, holding her own against some of the Titans in the process. She is eventually defeated in "Titans Together" when Jinx, whom had been subject to Rouge's abuse in Lightspeed and is now allied with the Titans, uses a hex to trap and release her legs as she is stretched outright by Hot Spot and Wildebeest and flinging her like a rubber-band into the path of the flash-freezing machine. 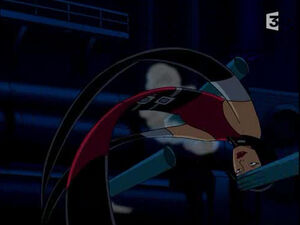