Swiping money from all of her customers

Place a curse on The Chief

Con Artist
Madame Shyster is an antagonist in the stop-motion show Action League Now! She only appears in the episode Fatter.

One day, the Action League visits a carnival. Melt Man is busy riding a teacup while the rest of the league are focused on their mission. They are looking for a con artist named Madame Shyster who is also a fortune teller. They immediately find her at a nearby exhibit. In a friendly tone, Madame Shyster offers to tell the League their future. The Chief - who is the leader of the Action League - tells Madame Shyster she is under arrest for swiping money from customers. She warns The Chief to stay back or else she will place a curse on his head. The Chief isn't afraid because he doesn't believe in curses. Madame Shyster moves her finger across The Chief's head while saying "fatter". He is still confident that nothing bad will happen to him. The teacup ride moves faster which causes Melt Man to fly through the air and land onto The Chief.

Later that day, Madame Shyster is sent to prison (a hamster cage containing other criminals). Meanwhile, the Action League returns to headquarters and finds The Chief pigging out on Chinese food. The Chief has gained weight and tells the league to get more food. He asks for 20 burgers and 6 buckets of chicken. He then tells the League he'll be in the kitchen if they need him. Thunder Girl notices The Chief's weight and is concerned about him. Melt Man suggests that they keep an eye on The Chief.

Later, The Action League goes to the kitchen and finds a ton of food lying on the floor. They suddenly find The Chief inside the refrigerator. He gained much more weight and is still hungry. The League takes The Chief to receive expert medical attention from Bill the Lab Guy. As usual, Bill says "There's nothing I can do." At the same time, The Chief is the size of a bowling ball. While The Chief is eating a chicken leg, he recalls the curse that Madame Shyster placed onto him. Stinky Diver realizes that the curse is responsible for The Chief becoming fat. Melt Man suggests they take The Chief to prison in order for Madame Shyster to undo the curse.

The Action League is forced to roll The Chief to the prison. They are having trouble because of The Chief's excessive weight. Stinky asks The Flesh to use his super strength. The Flesh backs up and rams into The Chief which causes him to roll towards the prison. The Chief falls downs a flight of stars located directly above the prison. At the same time, Madame Shyster is giving a fortune to one of her cellmates. She tells him that a mysterious stranger will flatter him or should she say flatten. The Chief lands onto the prison and crushes it. The Chief congratulates the Action League and asks for Madame Shyster. Unfortunately, Stinky and Melt Man tell The Chief that she was crushed when he landed onto the prison. He says that she was the only one who could removes the curse. He realizes he is doomed before saying he is hungry.

Bill measures The Chief and then tells Thunder Girl that he is going to burst open like a rotten pinata. The Chief blames the Action League. If Madame Shyster wasn't flattened then he would've been freed from her curse. Stinky blames The Flesh for pushing The Chief too hard. They argue and Stinky attacks The Flesh. He tosses Stinky onto the ground. This causes Stinky's spear gun to fire its harpoon directly towards The Chief. When the harpoon hits The Chief, his body bursts open and releases all of the food. He is relieved to return to his normal weight. He congratulates the league and asks how he can repay them. The Flesh suggests The Chief buys lunch. Everyone else, including Bill, looks at The Flesh. He asks them "What?" right before the episode ends. 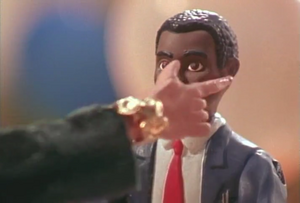 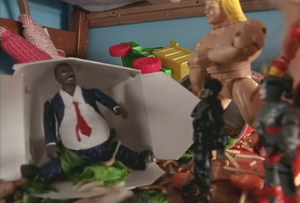 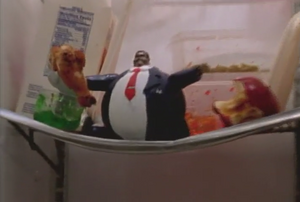 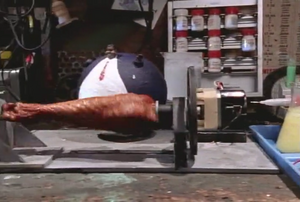 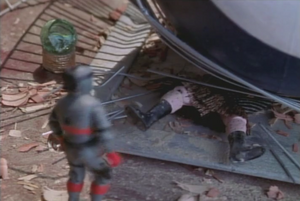 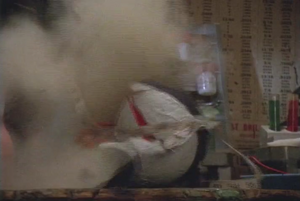 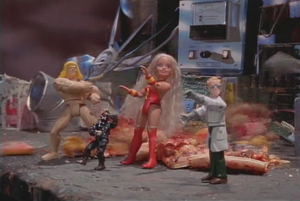 Retrieved from "https://villains.fandom.com/wiki/Madame_Shyster?oldid=4261887"
Community content is available under CC-BY-SA unless otherwise noted.