NOTE: This article is about the incarnation of Madame Viper from the X-Men film series. The mainstream version can be found here: Madame Viper.

Oncologist and servant/doctor to Ichirō Yashida

Ophelia Sarkissian, better known as Madame Viper, is the secondary antagonist of the 2013 superhero film The Wolverine, the sixth installment of the X-Men film series.

She is a beautiful, yet evil and mysterious woman who used snake-like powers to poison and/or kill others. Viper is secretly hired by Ichirō Yashida to extract Wolverine's immortality, leading Viper to inject a nano-bettle of hers into Wolverine's body to make him mortal.

She was portrayed by Svetlana Khodchenkova.

In 2012, Viper was met by Ichirō Yashida during his trip to the U.S.A, looking for a medic and hired her as his oncologist. She was first seen tending a sick Yashida, as Wolverine and Yukio enter to talk to him.

Later that night, she violently kisses Wolverine and infects his healing factor with a nano-bettle. He wakes up to discover that Yashida has died.

Next day she attends Yashida's funeral, in which a fight begins with an attack from the Yakuza. During the battle, she tapes Wolverine being injured while fighting, and also kills a Yakuza thug that threatened her with a gun. Wolverine escapes with Yashida's grandaughter Mariko.

That night she reunites with Black Clan ninja Harada who is forced to chase Wolverine and Mariko after Viper uses her powers on him.

A few days later the Black Clan rescues Mariko from her father Shingen. Viper confronts him and stabs him with a poisoned pen; he dies later in a fight with Wolverine. Mariko is brought to her grandfather's factory in which Viper sends her to sleep after injecting her.

Later, Wolverine is captured by the Black Clan and restrained to a machine by Viper, who taunts him and reveals a plan to extract his healing and pass it to the Silver Samurai. Mariko interferes and the machine breaks, forcing everyone to flee. Viper is shot by Harada, and falls onto a bridge. However, she doesn't die and regenerates her skin to heal herself.

As the battle continues, Yukio arrives at the factory and both engage in a fierce fight, in which Yukio wrapes a wire in Viper's neck and turns on the elevator. The elevator then collides with Viper's head, snapping her neck and leaving her corpse hanging. 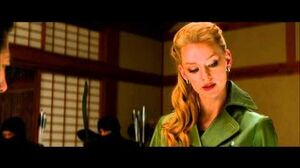