Madara is a minor antagonist in Fist of the North Star. He is a feral warrior in the Fang Clan and and one of the children of warlord Kiba Daioh (the ninety-eighth according to the guidebook Fist Of the North Star 2000).

He was voiced by Eiji Kanie in the anime and Yoshimitsu Shimoyama in Fist of the North Star: Legends ReVIVE.

Madara is first seen during the Fang clan's raid on a village, Madara is enraged and viciously kills villagers, even the villagers the Fang Clan intended to take as prisoners. Madara refused to obey when his brother Gojiba calls him back, necessitating the other Fang Clan members to hold him back with chains to protect their prisoners.

When Madara is questioned by his father, Kiba Daioh on this behavior, he mentions that he misses his fallen siblings and desires revenge for them. When Kenshiro arrives with Mamiya and Rei, Madara senses Kenshiro's killing intent towards the Fang clan and goes berserk, and with his father's wishes, Madara heads off the avenge his brothers. Attacking Kenshiro with his Kazan Bunretsu Ken, Kenshiro first attacks his jaw to prevent him to attack with his sharp teeth and later his claws. Kenshiro then used Hokuto Hagan Ken on left eye to have his head explode, Madara letting out a tortured howl as his body blows up.

Madara is a feral beast who doesn't appear to be human: his jaw muscles can extend like a wolf, his eyes have yellow sclera with slitted pupils, his mouth is covered in razor sharp fangs, his fingers end in retractable claws and fur grows on his body. Madara is animalistic in behavior: mostly communicating in growls, howls, roars or other canine noises. When Madara speaks, his voice is slow and rumbling. Madara is also hot tempered and when he goes on a rampage, only his father can calm him down

Despite this, it would be wrong to dismiss Madara as dumb; he is an advanced martial artist who fights with intelligent tactics, Madara can sense battle auras and killing intent and carries out the will of the Fang Clan competently. Madara appears to be nocturnal as he is most active at night, especially when the full moon is out.

Madara is a master of Kazan Bunretsu Ken(Huashan Separation Fist), an ancient martial art. The martial arts involves the practitioner rapidly encircling their foe, moving so fast that eventually it creates an afterimage illusion of the user splitting into multiple clones. As the martial artist and their afterimages lunge at their foe, the foe has to figure out which attacker is the real one and which is an illusion. As a powerful martial artist, Madara can sense the auras and killing intentions of nearby foes.

Besides his martial arts skill, Madara is incredibly fast, whether running on his feet or on all fours. His claws are sharp enough to cut people into pieces and his teeth tear through iron. Six members of the Fang Clan could barely hold back Madara. 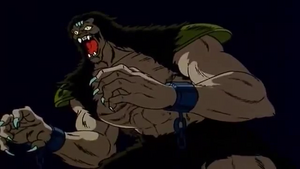 Retrieved from "https://villains.fandom.com/wiki/Madara_(Fist_of_the_North_Star)?oldid=4137885"
Community content is available under CC-BY-SA unless otherwise noted.