Skilled with a crossbow

Killing whoever Aldrich wants to be hunted.

Madden is the secondary antagonist in the 2016 movie Hard Target 2. He is the assistant of Jonah Aldrich and the leader of the hunters who are trying to take down Wes Bailor.

He is portrayed by Temuera Morrison.

In his youth, Madden wanted to join the military but never passed the psychic evaluation, he was deemed too crazy. He was eventually employed by Aldrich.

In one of Aldrich's killing-games, Madden leads a group of hunters after the last two survivors. One is eventually killed by Madden and his men, but Win, the other one, escapes wounded.

Together with his employer Jonah Aldrich, Madden later visits Wes Bailor, a former boxing champion who accidentally killed his opponent in the ring. Sutherland offers Bailor to participate in a Hunger Games-like battle in a jungle in Myanmar, where he will be pursued by hunters bent to kill him. Bailor claims that he has to think about it, but later contacts Madden. Madden brings him to Bangkok, where Sutherland fills him in on the specifics.

After the group has arrived at a military camp in Myanmar, Bailor is told that there will be no fight, but a hunt. Bailor will be forced to escape through the jungle while a hit squad let by Madden will follow him and try to kill him. To prove that the situation is real, Madden shoots two prisoners of the general leading the base. Bailor gets a two-minute headstart, then Aldrich, Madden and the hunters follow him into the jungle.

After Bailor manages to kill one of the hunters, Madden spots him. Bailor jumps in a river to escape but is shot by Madden and his hunters with their crossbows. Bailor manages to escape downstream. When Aldrich and Madden find more of their group slain by Bailor, they realize that he might be a harder target than expected. With a tracking device, Madden can locate Bailor and Tha once more, who have accidentally entered a field rigged with landmines. As one of the members of the hunt, Tobias, storms into the field and blows up, Bailor is once more able to escape in the chaos. Furthermore, Madden's device loses track of Bailor.

When it turns dark, Aldrich orders the hunters to make camp, as it is useless to attempt to search Bailor in the dark. The next morning, the hunting group catches Tha, who has found her brother Win and has left Bailor, on a railway bridge. They demand to know where Bailor is but Win claims that he killed him for the rubies. Not believing him, Aldrich orders Madden to hit both with a shovel. Aldrich then attempts to behead Win with a shovel, but Bailor arrives, with one of the hunters as a hostage. Madden asks for permission to shoot, but Aldrich claims that he has already lost too many clients to Bailor, he cannot start killing them himself now. Aldrich is forced to release his hostages.

After Tha and Win escape, Bailor releases his captive and attacks Madden. As Madden is fighting Bailor close quarter, Aldrich and his remaining hunter cannot shoot at Bailor without risking to lose Madden. Bailor kicks Madden in the face and jumps off the bridge, miraculously surviving without being hit by Aldrich's bullet. While attempting to pursue him, Madden finds the corpse of Sofia, the sole female hunter of the group. Madden also finds a mobile phone without an SD card which is revealed to belong to the hunter Landon. As Landon has disobeyed a clear order and also endangered the entire group, given that Bailor now has video evidence, Aldrich brutally slices Landon's throat. This leaves Aldrich and Madden with only one hunter left, so Madden calls in their professional mercenary squad in order to have a chance.

With their tracking device, they find the general location of Bailor, Tha and Win once more. Bailor realises that there must be a tracker in the bag of rubies. He finds it and takes it out of the bag. He then sends Win and Tha to escape while he stays behind with the tracker to give them a chance. Bailor sneaks in the soldier camp, where he starts sabotaging the equipment. He then escapes with one of the soldier's dinghy and, once safely on the river, shoots at the gas can he sabotaged before, blowing up a large part of the camp. Aldrich sends the soldiers after him while he and Madden board a helicopter. He shoots at Bailor from the helicopter, but misses. He orders the pilot to turn the helicopter around in order to take another shot at Bailor. Madden warns him that Bailor has almost reached the border but Aldrich remains convinced that they can reach him in time. However, Bailor reaches land. He is forced to fight many of the general's men in order to cross the last few meters to the border that will save his life. He climbs the bridge which leads directly to the border but Aldrich and Madden leave their helicopter and land on the bridge as well. To reach the border, Bailor is however forced to cross the bridge, which means he has to pass Madden and Aldrich. When Bailor refuses to come forward, Aldrich instead shoots a civilian, claiming that the bullet was meant for Bailor. He then takes another hostage, a small boy. Not willing to let the kid die, Bailor reveals himself and Aldrich lets the boy go. Aldrich then demands the memory card but Bailor does not reveal where it is. Madden then brutally beats up Bailor to extract the information. Aldrich then taunts Bailor with killing his friend and opponent in the ring.

Aldrich then brings in a new group of hunters and claims that he deserves a little entertainment. He has one of the hunters bring him and Madden a beer and then orders the five to take down Bailor. Madden and Aldrich watch during the fight. When it seems that Bailor can defeat them, Madden wants to join the fight but Aldrich claims that the time has not yet come. Only after the five are all knocked out, he unleashes Madden. Bailor however easily defeats him and knocks him down. Alrich then attempts to shoot Bailor but Bailor wields Madden around, who is shot in the chest instead. 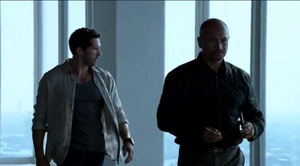 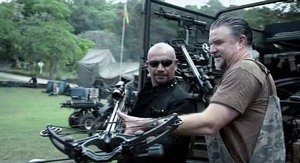 Madden and the hunters eqip themselves with weapons 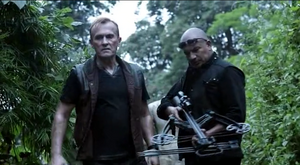 Madden and Aldrich continue the hunt 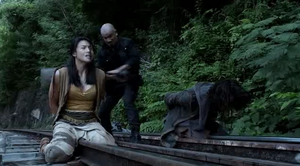 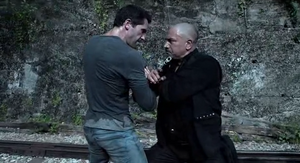 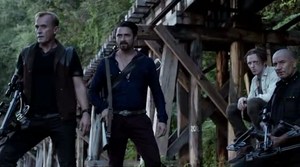 The hunt, severely decimated by Bailor
Community content is available under CC-BY-SA unless otherwise noted.
Advertisement