Committing crimes that she has gone too far (formerly).

Varies depending in the films and/or media.

Commit crimes and avoid the law by any means necessary (partially succeeded; but later abandoned).

Mabel Earlene Simmons, more commonly known as Madea, is the titular villainous main protagonist of the Madea franchise. She is a tough, elderly African American woman created by Tyler Perry.

Although she is a main character, Madea gets in the bad crazy way and become a lifelong criminal, being a protagonist villain in the entire series. She has a tendency to overreact and is willing to threaten to use deadly weapons, destroy property, use physical violence, take on the law, and use any and all means necessary to show up an offending party. Despite being a villain, she still has heroic acts as an anti-hero on occassions.

She was portrayed by Tyler Perry himself who also played Baxter Stockman in Teenage Mutant Ninja Turtles: Out of the Shadows.

Madea serves as the titular main protagonist of Madea's Family Reunion, Madea's Big Happy Family, Madea's Witness Protection, A Madea Christmas, Madea's Tough Love, Boo! A Madea Halloween, the 2017 Halloween sequel, and A Madea Family Funeral, the titular deuteragonist of Diary of a Mad Black Woman and Madea Goes to Jail, and a minor character in Meet the Browns and I Can Do Bad All by Myself.

She is also set to return in the upcoming 2022 Netflix film A Madea Homecoming.

Madea was born in Greensburg, Louisiana, on June 26, 1935, and raised in New Orleans, Louisiana. Her maiden name is unknown, but it is presumably either Baker or Murphy as they were the last names of her father and mother, respectively.

Madea was brought up in poverty and grew up living in a shotgun house with her parents and siblings. She has stated that although her family didn't have much, they had love. She even claimed that her daddy would go outside and hunt for dogs and cook them on the stove to eat for dinner. As a result, Madea grew up with little knowledge of Baptism.

At age 9, Madea became a lifelong criminal with a charge of petty theft. It is also reported that Madea was charged with her first felony at this age, and her crimes began progressing to illegal gambling at age 18.

She attended Booker T. Washington High School, where she served as a cheerleader. When Madea was 16, her parents moved her and the rest of her immediate family to Atlanta, Georgia, in a barn house.

In the films, it has been revealed that Madea used to be a stripper, and her stage names were Platinum and Delicious. It is heavily implied that she was a hooker as well.

Madea is very scurrilous, wise-cracking, and saucy in remarks and behavior, and she is full of comical sass and vulgar and abusive language. Despite her outrageous and shocking behaviors, Madea is consultative, protective, loving, and motherly at heart. This is heavily evidenced in Gets a Job, in which Madea provides life lessons, guidance, and direction to all the residents and staff members of a nursing home. Moreover, on numerous occasions, Madea has accepted family members who were without a place to stay into her home on her own accord.

Quite often, Madea has offered direction and guidance to those who were being abused within their romantic relationships. Much of this direction and guidance tends to come in the form of extreme warmongering. Madea also instructs troubled individuals about the mistakes they've made in their life choices and leads them down the path of forgiveness and improvement.

Madea is mentally strong and offers nurturing advice to struggling individuals whom she cares for. 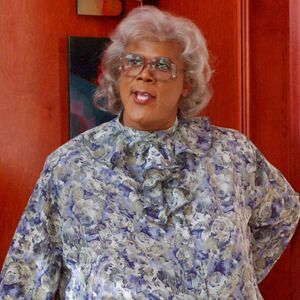 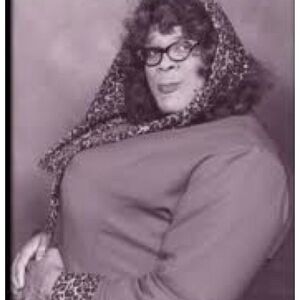 Madea in her youth. 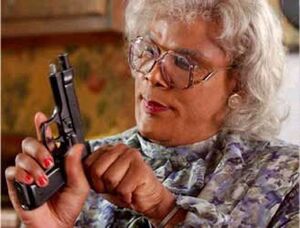 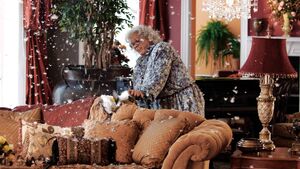 Madea sawing down the sofa with her chainsaw, going insane. 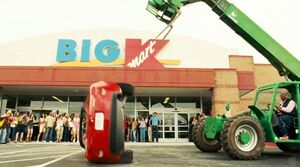 Madea dropping the Lady's car with the crane after the Lady took Madea's parking spot. 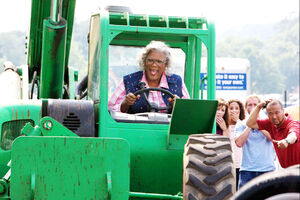 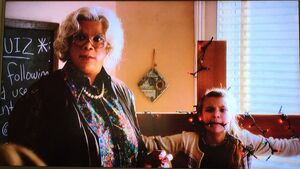 Madea torturing a little girl for stealing her purse. 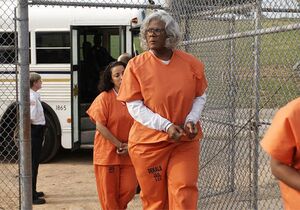