Get superheroes into the military.

Madelyn Stillwell is a major antagonist in the Amazon series The Boys, serving as the overarching antagonist of the first season and a posthumous antagonist in the second season. She was Vought-American's Senior Vice President of Hero Management and is responsible for managing the superhero team The Seven.

She was portrayed by Elisabeth Shue.

Madelyn's big plan is to get her superheroes into the military, so they can be sent to fight worldwide. She wants to achieve it no matter the cost and has resorted to blackmail. Despite her pitching the idea numerous times, she had no success. Then she decides to capture terrorists and other criminals and artificially give them superpowers. By purposefully creating super-villains for her heroes to fight, she is certain that her idea can't be rejected anymore. Later on, she has a meeting with her boss, Stan Edgar, about the future of the company. However, Homelander finds out about Stillwell's lies, and attacks her brutally, killing her.

Madelyn comes across as very kind and polite on the surface. She actually cares little for other people and uses them simply to achieve her own goals. Her company and her reputation are the most important things to her. She doesn't care if people die, as long as her reputation isn't hurt by it. The only exception with this is her baby Teddy who she deeply cared about.

In order to achieve her goals, she is ready to sacrifice a lot of people. Madelyn is also shown to be very manipulative towards Homelander. She completely abuses the fact that he cares so much for her. However, she is also extremely afraid of him as she greatly fears what he could do to her due to his power, and instability. 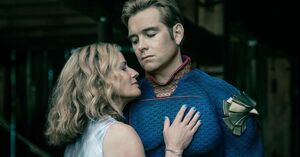