Torture and experiment on innocent people.
Kill the imprisoned woman.
Capture Anna as their new victim.
Get a family replacement.
Discover the secrets of the afterlife.
Hear Anna's experience from the transcendence (all succeeded).

Mademoiselle is the main antagonist of the 2008 French horror film Martyrs, and its 2015 remake of the same name. She is an elderly woman who belongs to and leads a cult-like group which is dedicated to discovering what comes after death.

She was portrayed by the late Catherine Bégin in the original film, and Kate Burton in the remake.

Mademoiselle is an extremely dedicated person who is completely obsessed with discovering the truth of the afterlife. She is quite intelligent and able to lead an entire organization. However, she is extremely cold, as she does not care for all of the suffering that she puts her subjects through. Mademoiselle is a coward as she does not want to feel any pain herself. The unspeakable torture she lets others endure show just how willing she is to find it out. She herself believes that those who are too weak do not deserve salvation and thinks that those who do transcend, will be thankful to her.

She developed the idea of being able to discover the afterlife by creating "martyrs". She planned to inflict systematic torture upon people, so that their suffering allows them to transcend this world and get a glimpse of another plane of existence. Mademoiselle also believed the world to be divided into "victims", being those who cant bear the pain, and "martyrs", those who can accept it and transcend. She kept relentlessly pursuing the goal to create a true martyr. What she discovers is that young women are the most sensible to that enlightenment. She captures and gathers many women and let them be physically abused by all her underlings. So far, all of their attempts have failed, and they have only created "victims", as the women were driven insane, although some have gotten quite close.

One of the captured girls, Lucie, managed to escape the facility, after already enduring lots of torture as a child. Lucie eventually tracks down the Belfond Family, the members of Mademoiselle's society who tortured her and kills them. Anna, a friend of hers, comes to that house and is shocked. Lucie commits suicide and leaves Anna behind. Other members arrive and bring her to Mademoiselle. She explains everything about her secret philosophical society. She also reveals that their society was responsible for Lucie's childhood kidnapping. Anna becomes their latest subject and is imprisoned in a chamber and relentlessly tortured. Soon after, Mademoiselle realizes that she has progressed further than any other test subject, and has reached the "final stage" and will suffer no more. Anna is taken to a surgeon and is skinned alive. She survives the procedure, entering a state that is described as being "euphoric" and likened to achieving transcendence.

Mademoiselle is very excited and eager to speak to Anna about her experience. Anna then whispers into her ear.Members of the society begin gathering at the house to learn of the insights Anna shared with Mademoiselle. As Mademoiselle prepares herself, a doubting member asks her if what Anna said was clear and precise. Mademoiselle replies that there is no room for interpretation, and asks him if he could imagine what comes after death. When he says no, she tells him to "keep doubting" and places a revolver in her mouth and shoots herself.

The ending of the film, in which Mademoiselle kills herself has created theories regarding to why did she kill herself. It is believed that whatever Anna whispered to Mademoiselle, made her lost meaning of life. Mademoiselle did not want to share the inflammations with the Society, because she thinks that it will cause more people to kill themselves. Because of this, she takes her life, without giving answers of the afterlife. The only thing she said was "keep doubting", which possibly means that the "doubt" of what comes after death, keeps humans alive without instantly killing themselves, and "doubt" gives life a meaning.

Other suggest that Anna told Mademoiselle what she was seeing, memories of Lucie and her in the past, and that she did not see any kind of afterlife, instead that she visioned her past memories, which is the happy place inside of her head. The Mademoiselle then realizes that her whole life has been wasted of making innocent people suffer, and that all of her philosophical theories are a falsification. The reason why she kills herself is because she had no happiness in her life, no love, and her only memories consist of making others suffer. Her existence became useless, so she decided to just end it.

Although, these are just speculations, it is unknown what did Anna really say to Mademoiselle, making it a mystery. 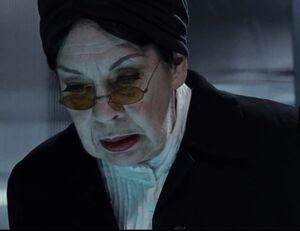 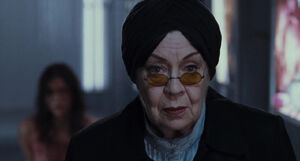 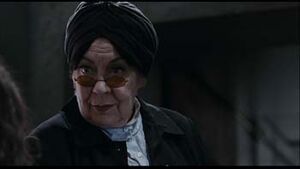 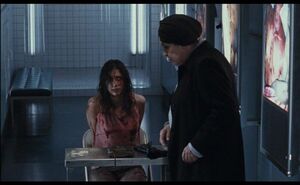 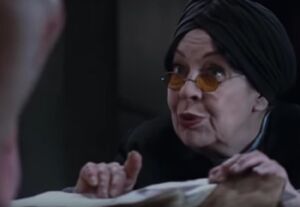 Mademoiselle explaining her ideas to Anna. 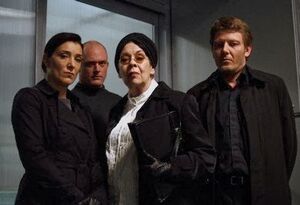 Mademoiselle with the Society. 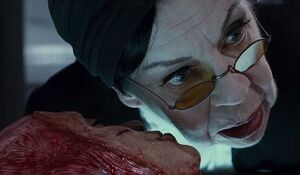 Anna revealing everything to Mademoiselle. 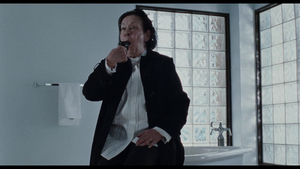 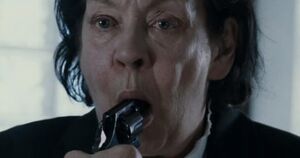