Become the new Supreme through whatever means necessary (formerly, failed).

Discover the truth about and help defeat Michael Langdon (succeeded).

Out-of-control Hollywood starlet Madison Montgomery is used to things going her way. But after becoming stranded at Miss Robichaux's Academy, she may learn that she needs more than star power to shine. Madison became famous at an early age. Because of her family's small income, with no one being able to keep a steady job, her mother capitalized on her daughter's early beauty and talent to make her a child star. Madison soon became the breadwinner. Her mother (she claims) was horrible, and at one point in her life snorted half her cocaine and then pinned the whole fault on Madison when the police showed up. Madison sought refuge in Miss Robichaux's Academy for Exceptional Young Ladies when it became publicly apparent that she was special. This came to head when she killed her director after he criticized her ability to follow directions by telekinetically dropping a spotlight on his head.

Madison Montgomery, Nan, and Queenie decide to pull a prank on the new student Zoe.  As Zoe enters Miss Robichaux's Academy for Exceptional Young Ladies the girls stalk her and ultimately seize her and pin her to a table. Madison mounts Zoe and draws a ceremonial knife, holding it over her head. She begins to chant and right as she brings the knife down, all the while Zoe is screaming for her life, the girls quit their act and reveal that it was all a joke. They introduce themselves, Zoe recognizes Madison for her roles in movies. Later that night, the girls get to know each other during dinner. Madison reminisces about her life before coming to the school and glosses over an incident with a director that she killed with her telekinesis because he critiqued her ability to follow directions. Nan quickly confirmed to everyone at the table that the "accident" was anything but, much to Madison's annoyance. Queenie then began to berate Madison and in anger, Madison mentally threw Queenie's dinner onto her. Queenie retaliated by stabbing her hand and directing the resulting pain and damage on to Madison's body. Nan persuades Queenie to leave before things get worse. Zoe and Madison remain at the table with Madison declaring that given the circumstances, it looks like Zoe will be her new best friend. Madison gets informed via social media of a frat party taking place and invites Zoe to tag along as her new "best friend".  At the party, Madison is hit on by one of the frat boys and instructs him to get her a drink. Unbeknownst to her, the guy mixes roofies into her drink. Madison becomes impaired as a result, and the frat boy leads her into a bedroom.

A group of frat boys gang rape a half-conscious Madison, some even recording videos of her on their phones, until their fraternity president Kyle Spencer walks in with Zoe and chases them out the party. The rapists and Kyle (who was knocked out) end up on their party bus and attempt to escape, but they don't get far because Madison, now conscious, seize their bus with her telekinesis and destroys it by flipping it upside down with them inside. Only two fraternity brothers survive, the others are dismembered and killed. While Madison says the following morning that she is over what happened, she is later shown sobbing in the bathtub.

After learning that Zoe used her gift to kill the main rapist, Madison decides to repay Zoe back by helping her reanimate Kyle since Zoe can never have a living human due to her power. However, when they arrive at the morgue, Kyle's body has been dismembered. Madison gets the idea to reattach other body parts to Kyle's head in order to create "the perfect boyfriend" for Zoe. When the resurrection spell doesn't appear to work, Madison goes outside to the car while Zoe says her last goodbyes to Kyle, but she ditches Zoe at the morgue when a security guard shows up.

When Joan Ramsey and her attractive teenage son Luke move into the house next to the academy, Madison decides that he will be her latest conquest. She goes to the house with Nan, wearing a skintight dress, and attempts to flirt with Luke until his mother walks in. When Joan asks them to leave, Madison throws a knife at the wall. She also unintentionally sets the curtains on fire. After learning about Madison's new gift, Fiona takes her on as a new protege. In a pool hall, Madison practices Concilium while Fiona watches. They toast her success, and Fiona discreetly pours out her own alcohol, but Madison continues to become more intoxicated. She must now pay attention, least Madison displaces her as Supreme. Secretly Fiona is trying to keep Madison from replacing her. Back at the school, Fiona reveals that she is dying of cancer and that her life force and powers are pouring into Madison. Fiona hands Madison the same knife she used to slash Anna Leigh Leighton's throat in 1971, urging Madison to cut her throat and let her die in "style", but she refuses. During the scuffle, Fiona (seemingly) accidentally slashes Madison's throat.

Fiona has Spalding get rid of Madison's body. The next day, the Council (who was called by Nan) visit the school, questioning the girls on the whereabouts of Madison. Upon learning from Nan that Fiona was the last person to see Madison alive, Myrtle Snow (the head of the Council) becomes convinced that Fiona murdered Madison to keep her from replacing her as Supreme. Cordelia defends her mother, telling the Council that Madison was not the next Supreme because Supremes have "radiant health" and because Madison had a heart murmur, it would nullify her being the next in line. Spalding is keeping Madison's corpse as a life-sized addition to his doll collection, although she is steadily decaying and Spalding accidentally rips off her arm while pulling her out of a box.

Zoe uses the spirit board to locate Madison. The board spells out "attic". Zoe goes into Spalding's room and finds Madison's body in the trunk and Spalding attacks her. Later, Zoe, Queenie, and Nan interrogate Spalding. They ask him questions and Nan reads his mind for an answer. Zoe asks him if he killed Madison, to which he responds "yes", however, Zoe knows he's lying. Zoe goes to Misty's shack and asks for her help. At the academy, Zoe and Misty repair Madison and resurrect her. Madison awakens and says "I need a cigarette." The girls decide to keep Madison's resurrection a secret.

Later that night, Nan, Queenie, and Zoe ask Madison what she last remembers. Madison replies: "red" and tells them what it was like on the other side.

She is later seen dressed in black engaged in a monologue with herself, she laments the fact that she cannot feel any physical sensations and is in obvious distress. She holds a lighter flame to her hand and devours the entire contents of the school's fridge in an attempt to feel something.

She comes across Cordelia who has just ventured out of her room and rescues her from tumbling down the stairs due to her lack of sight. As the two make contact, Cordelia learns the truth of Madison's death through her new found powers. Knowing now that Fiona did kill her, Cordelia tells Madison that she has to stay hidden because they don't want her mother knowing that she's alive. Madison later has a conversation with Kyle, who Zoe is hiding inside the school, and asks him if he remembers dying. For her, she explains that it was dark and cold. Like a deep sleep. When Madison starts to cry, Kyle tries to comfort her by giving her a hug. Which eventually leads to the two having sex off-screen.

Madison and Zoe go to hospital browse Nan, arriving there they decide to enter, along with Nan, in the room of Luke, they are confronted by Joan and Madison reveals that they are witches, after a brief conversation the girls go back to the academy, reaching la Madison is surprised to see Kyle incredibly normal, Fiona takes the credits by such act.

Cordelia visits Madison, wanting help in finding Misty but Madison uses transmutation to evade Cordelia's touch, but gives in and says she has no secrets to hide. Later, Myrtle tells Madison that Cordelia and Queenie have headed out to retrieve Misty, much to Madison's displeasure. Misty returns to the Academy and punches Madison for trying to kill her. A fight ensues between the two witches, but Misty gains the upper hand before the fight is broken up by Kyle. Madison (along with Zoe, Queenie, and Misty) murder The Axeman.

Madison, Misty, Queenie, and Zoe begin the Seven Wonders. Eventually, the test of the Seven Wonders comes down to Queenie and Madison after Misty dies from being unable to come back from Descensum and Zoe dies from accidentally impaling herself on the front gate using Transmutation. Queenie is unable to bring Zoe back to life using Vitalum Vitalis, and Madison successfully kills and brings a fly back to life. The matrons tell her that if she does not try to return Zoe then she is not worthy to be Supreme. Madison tells them off and walks away. Cordelia decides to enter the test of the Seven Wonders, successfully performing Telekinesis, Concilium, Descensum, and Transmutation. Madison attempts to do Divination to find an item belonging to Anna Leigh Leighton but fails twice to Cordelia. Madison curses and departs, threatening to expose the Coven to the media. Kyle appears, wanting to know why did she let Zoe die since they both know the darkness beyond death. Mad, he attacks her, and she says she did it for him. Kyle says she's not that good an actress and strangles her to death. It is likely that Spalding has returned her cadaver to his collection.

Madison is seemingly self-centered and egotistical. She does, however, show glimpses of vulnerability, especially after being gang-raped at a frat party in the very first episode of Coven. Vain and gaudy, she wears only name-brand clothing and keeps her face made up.

Madison's dynamic with the other students is verbally abusive, and she often comes to magical blows with them. She takes jabs at Nan, Queenie, and even Fiona, though she is quickly put in her place by the Supreme. In Zoe, however, she finds a friend and this bond is quickly solidified during the frat party, where Zoe makes it point to track down Madison's rapists, only to bear witness to Madison's powers as she overturns their escaping bus with a simple wave of her arm, killing all except two students.

However, throughout the course of the series, Zoe begins to resent Madison after seeing her narcissistic and sociopathic tendencies, such as attempting to kill Misty and showing no remorse for her or Nan's deaths. It seems her friendship with Zoe meant nothing to her since she refused to bring Zoe back after she accidentally killed herself, saying she "lost fair and square.". 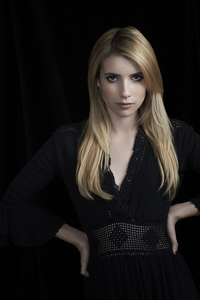 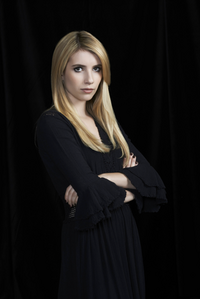 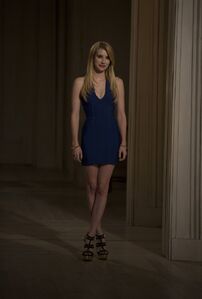 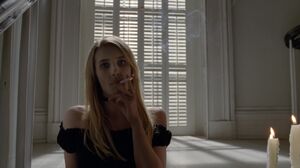 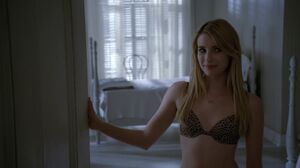 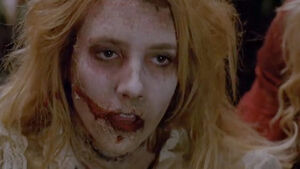 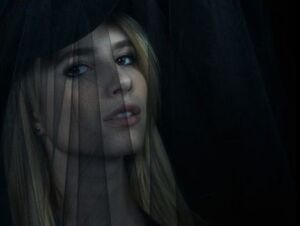 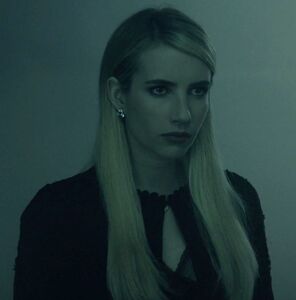 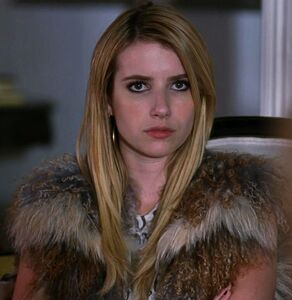