Looking at his stop-watch.

Blackmail Klint van Zieks so he could become the lord chief justice.
Pin the murder of Klint van Zieks to Genshin Asogi.
Make Seishiro Jigoku kill Genshin to cover up his crimes.
Hire Kazuma and Jezaille Brett to assassinate Dr. John H Wilson and Tobias Gregson to keep them from talking (all succeeded).
Get away with his crimes (failed).

Mael Stronghart has white hair and beard with blue eyes. He also wears a green suit with green pants brown shoes, white gloves and holds a cane in his left hand.

At first Stronghart appears to be an affable, and humble person who only wants to best in the empire of London, however inside he is a delusional, corrupts official who believes what he is doing is right for the law, but in actuality he is making everything worse.

In his first breakdown, he stands up in the judge's bench, raises his arms and screams, after a minute or two he stares clapping slowly but as he keeps clapping, the claps goes faster and faster.

In his second breakdown, after Herlock reveals that the queen was watching the entire trial the whole time, he continently hits the judges bench with the cane repeating the words "adjourned" until the top snaps. He topples over the bench and falls down onto the jury's bench activating the flames that enters the guilty verdict witch causes the scale to topple over towards Stronghart witch ended up causing the courtroom to go into flames as he screams with the big flames behind him. 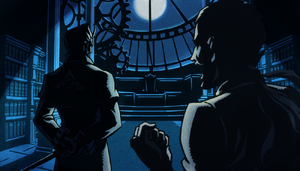 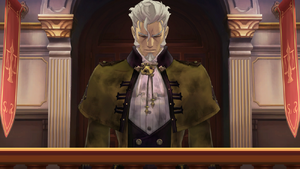