Dictator of a post-apocalyptic Earth (formerly)

All of the Hulk's abilities but amplified to a much greater extent due to advanced age and absorption of radiation
Regenerative healing factor, also increased because of age and radiation exposure
Scientific genius
Extensive experience in hand-to-hand combat
Manipulation
Intimidation and fear-inducing skills
Ruthlessness
Unpredictability

The Maestro is an alternate-future version of the popular Marvel hero known as the Hulk, however he is a brutal tyrant who is stronger, more experienced and much more ruthless and sadistic than his current self. He was the main antagonist of the Future Imperfect story arc and was strong enough to snap the neck of the Hulk, temporarily paralyzing the hero. He was also the main antagonist of the 2015 Contest of Champions series.

Maestro ruled over a barren world torn asunder by nuclear war, his powers amplified due to the now plentiful radiation in the atmosphere and his mind all but shattered by the many cruel events of his life, he took command of this broken world and united it under his iron-grip, ruling over the few human survivors as a tyrannical dictator whose word was law and who had a liking of ruling in a fashion similar to the ancient warlords.

When modern-day Hulk was transported to this dark future he found himself quickly at war with the Maestro and found himself battling not only a monstrous enemy but also a being that represented how far Hulk's hatred could run, the embodiment of what could happen if Hulk ever truly gave in to his inner-rage and hostility.

Maestro and Hulk battled fiercely until Hulk was forced to defeat Maestro via transporting him back in time to ground-zero of the site where the gamma-bomb that bestowed Banner with Hulk's power was detonated, this act seemingly wiped Maestro out on the atomic scale.

Later, Bruce Banner's mind became trapped in what was possibly Hell, where he was forced to confront his past enemies, including Maestro, who explained to him that death didn't mean the same for them as it did for other beings, and that sooner or later, they always came back. He also revealed that the Hulk's uncanny ability to always find his way back to the site of the gamma bomb test where he was spawned was because of the Maestro's spirit drawing him back, so that the skeletal remains of the Maestro could slowly siphon off enough gamma radiation over the years to restore his body. After that encounter, the Maestro finally returned to life, but in a greatly weakened and emaciated state, with his flesh hanging off his bones. He stumbled deliriously away into the desert, but collapsed. A group of Asgardian trolls came across him and carried him off to their hidden cave, where they used his soul to empower the Destroyer armour. The Maestro's spirit in the Destroyer sought out the Hulk and again engaged his younger self in combat; however, as the Hulk and the Maestro shared the same DNA, the Hulk's spirit was able to enter the Destroyer and slam the its visor shut just as it discharged its disintegration beam. The resulting shockwave caused a massive rockslide, which unknown to the Hulk, buried Maestro.

For years afterward, the Maestro was neither seen, nor heard from. This changed when Miguel O'Hara, the Spider-Man of 2099, who had been trapped in the present day, returned to what he thought was his native timeline, only to find it a nuclear-ravaged ruin. He soon encountered the Maestro, although whether this was the original or simply an alternate reality counterpart is uncertain. After a brief skirmish, in which Maestro toyed with O'Hara, the tyrant battered O'Hara into submission and then took him back to this new reality's Dystopia as a prisoner, where he placed him in a cell with his old ally Strange 2099, that era's Sorceress Supreme. Strange healed O'Hara's severe injuries from his battle with Maestro and together they broke free from captivity and made their way to the Maestro's trophy room - a veritable museum of relics and artifacts from the Heroic Age. One such relic was Doctor Doom's time platform, which O'Hara set to repairing in order to escape this new timeline. The Maestro, arriving unseen by using the Hood's cloak of invisibility, seemingly killed Strange and again engaged O'Hara. This time, the future Spider-Man managed to hold off the Maestro, even downing the green brute using the remnants of Iron Man's Hulkbuster armour, before escaping back to our present. However, once O'Hara had fled, it was revealed that Strange was still alive, and that she - more accurately, the demon possessing her body - was working with Maestro. It seemed that although Maestro retained Banner's intellect, his scientific skills had eroded, possibly because of his madness and years of self-indulgence, so he had manipulated events so that O'Hara could repair the time platform instead. Maestro then travelled to the present day and leaped away to whereabouts unknown.

The Maestro, as a version of the Hulk, possesses all the same powers: extraordinary superhuman strength, endurance, resistance to harm and disease, and regenerative ability, which increase with his rage. Notably, due to years of absorbing radiation from nuclear fallout, his base strength level is far greater than that of the present-day Hulk, even before he becomes enraged. As well as his raw physical might, the Maestro retains the intellect of Bruce Banner, but absolutely none of his morality or conscience. Regarding his intellect, it should be noted that whilst he built Dystopia himself, his technical skills have seemingly degraded somewhat due to lack of use, and his reasoning is somewhat affected by his madness and his single-minded pursuit of hedonism and self-gratification. Nonetheless, the Maestro is still dangerously intelligent and cunning, and has over a century's worth of knowledge and experience to draw on. He is also a shrewd manipulator when the need arises. With his greater strength, ruthlessness, and experience, plus his ability to predict his younger self's moves in combat, the Maestro was able to dominate the modern-day Hulk whenever they fought.

The Maestro's spirit was able to establish a psychic link with the Hulk after his physical death, in order to draw him back to the site of their "birth". As demonstrated by his aged features and the fact that he is well over a century old but still in his physical prime, the Maestro's ageing may be slowed or even halted after a certain point, thanks to his healing factor, possibly making him (and by extension, the Hulk) either very long-lived or even immortal. As the Maestro explained to Bruce Banner, their regenerative abilities are enough to revive them even years after death, given enough time and gamma radiation exposure, which was amply demonstrated shortly after when the Maestro had finally absorbed enough gamma radiation from the Hulk to return to the land of the living. It can be safely assumed that Maestro shares the Hulk's other abilities, such as being able to interact with spirits and astral forms, resist and overcome mind control, and manipulate energy (particularly gamma energy) to at least a limited degree, but he has not yet demonstrated these powers.

Lastly, the Maestro has demonstrated the ability to transform back into his now-aged human form at will and still maintain his full mind, suggesting the chilling possibility that rather than being yet another personality, this Banner's mind is whole, but so warped by decades of pain and rage that he has fully embraced the darker parts of himself and truly become the monster the world always made him out to be.

Maestro appears in the video game Marvel's Avengers as the main antagonist of the expansion story "Future Imperfect". 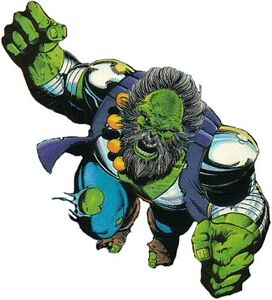 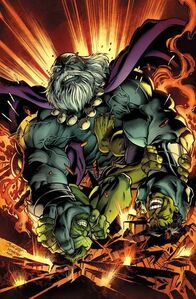 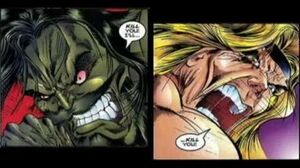