Beauty and the Beast: The Enchanted Christmas

Manipulating those around him.

Playing himself while soothing the Beast's anger.

To destroy Beast and Belle's relationship (and later kill them) in hopes that the curse would be permanent (failed).

Maestro Forte (simply known as Forte) is the main antagonist of Disney's 1997 direct-to-video animated holiday film, Beauty and the Beast: The Enchanted Christmas. He is an evil pipe organ who acts as both the Beast's musician advisor and "best friend", but later reveals that he has been manipulating the Beast to prevent him from falling in love with Belle, so he can remain as a pipe organ.

He was voiced by Tim Curry, who also played Hexxus in FernGully: The Last Rainforest, Emperor Palpatine, General Von Talon in Disney's Valiant, Pennywise in Stephen King's IT, Drake in The Pebble and the Penguin, El Malefico, Dr. Frank-N-Furter, Ben Ravencroft in Scooby-Doo and the Witch's Ghost, Evil Manta, King Chicken, Kilokahn, Taurus Bulba, and Wadsworth.

Forte is depicted as an evil, sarcastic, manipulative, acrimonious, obstreperous, and a bit paranoid pipe organ. At first, Forte appeared to the Beast as his "best friend", but he was really manipulating him because he wanted to both remain as a pipe organ and sought some attention. Forte also seems to be quite afraid to fade in the background, afraid that he will be forgotten. He also has a deep hatred towards happiness (or at the very least, happy songs) as he prefers sad music. He is also extremely superior, cunning, powerful, intelligent, and a bit misanthropic, as he considers humanity to be overrated.

Following his failure of his plan to break up Belle and the Beast's relationship, Forte loses what was left of his sanity by attempting to bring the castle down with his loud music, apparently having no regard of his own life as he was willing to take everyone's lives in the castle along with his own. This may indicate that Forte may have some destructive and suicidal thoughts, as he was willing to endanger his own life to ensure that the spell remains intact. Despite Forte's true colors being exposed and his diabolical plans foiled, the Beast mourned Forte's death, as he considered him to be his closest friend.

Forte was once the loyal composer for the selfish prince, and had been very close to him as the latter rules his kingdom with an iron fist. It was not until one Christmas night, when the prince selfishly refused to give shelter to an elderly woman, who revealed herself to be an enchantress in disguise. As punishment, the enchantress casts a spell on the castle, transforming the prince into the Beast and that he will remain that way until he earns the love for who he is on the inside before the magical rose blooms away on his 21st birthday. As such, all of the servants were transformed into objects, and Forte was transformed into a pipe organ which was chained to the wall of a hidden room in the castle's West Wing. Because of this event, the Beast and Forte develop a hatred of Christmas for the rest of their lives.

Unlike the Beast and the other enchanted servants (who all wish to end the curse and change back to human), Forte did not wish to be human again since the Beast came to him often to hear his soothing music, which would ease his tormented soul. In this form, he also developed powerful and seemingly demonic abilities, which he could release through his own music, and became obsessed with it. As such, Forte felt that he had more use in his enchanted form so he decides to use it to keep the Beast close to himself to prevent the spell from breaking, which has remained this way for ten long years.

Following the tenth year, a village bookworm named Belle came to the castle and made a deal with the Beast to stay with him in exchange for her father's freedom, to which the Beast accepted. As the winter goes by, Belle and the Beast develop a newfound relationship after the latter saved the former from a pack of wolves. This raises up both the Beast and the other servants' hopes that the spell will finally be broken, but Forte became enraged by this and secretly plotted to destroy their relationship to make sure the spell would remain intact forever.

Through his henchman, Fife the enchanted piccolo, he tried to destroy the Beast and Belle's relationship, promising him a solo in B Flat (though he never actually intends to give Fife the solo). He tried to persuade the Beast that love was meaningless and that his music was all that he just needed. When that failed, Forte tried to convince the Beast that Belle doesn't care about his true feelings for the holiday (though Belle doesn't actually know about them yet), which led to a serious argument between Belle and the Beast. This too also failed, as Lumiere convinces the Beast of a Christmas gift that Belle made for him as it shows how much she cares about him, which prompted the Beast to have another chance with the holiday. Seeing this, Forte makes another attempt by luring Belle with his music and convincing her to go down the treacherous Black Forest to find the perfect Christmas tree (despite Belle's promise never to leave the castle grounds), which Forte states to be the Beast's favorite part of the holiday, though it is not true.

As Belle fell into it, Forte informed the Beast that she has "abandoned" him, leaving the angry Beast to revert back to his hatred of Christmas and take Belle back to the castle before locking her up in the dungeon for breaking her word, much to Forte's sensational delight. However, the Beast finally regained his senses after opening up his Christmas gift, which turns out to be a book written by Belle, explaining the true meaning of Christmas. Through the words of the book, the Beast finally sees that Belle never intended to leave him and instead tried to bring back his Christmas spirit as promised, and that the greatest gift that anyone could receive was hope. Seeing that there could still be hope to break the spell, the Beast decides to release Belle, much to Forte's objections. The Beast then apologizes for his actions and allows Belle and the rest of the servants to celebrate the holidays, much to their delight.

Knowing that there will be a chance for the spell to be broken, Forte, refusing to "fade into the background", decides to bring the whole castle crashing down, intending to kill everyone inside, since no one can fall in love if they are dead. He creates a destructive earthquake that rattles the castle by playing a grand tune at sonic sound levels. Fife tried to stop him as the plan was too extreme, but Forte refused and revealed to him (via exposing blank music sheets) that his promise to give Fife a solo was a lie.

Upon seeing that the castle is in danger, Belle and the Beast break into Forte's room, where the Beast angrily berates his composer for his actions, demanding him to stop. Seeing no more in his heart to listen to the Beast, Forte refuses to stand down and instead continues rumbling the castle with his music, unleashing the full might of his power, and uses note shaped lightnings to strike his own master.

Avoiding the lightning, Fife advised the Beast that he must destroy the keyboard to stop the music. As such, the Beast decided that his own best friend was too dangerous and harmful to remain alive, and he ripped Forte's keyboard away from him and smashes it, which ceased his contact with his pipes. In a blind rage, Forte tore himself free of the wall and began to collapse. This effectively "kills" Forte and he slams down to the ground screaming in defeat, finally destroyed and silenced.

Though the Beast finally knew Forte's true colors, he ended up mourning the death of, what he considered, his best friend, with Belle comforting him. With Forte defeated, the whole castle continues to celebrate the holidays as planned, as Fife would later take up Forte's job as the new composer.

Forte as a human. 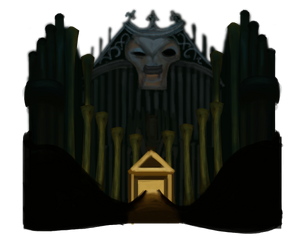 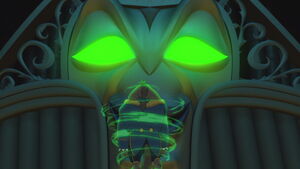 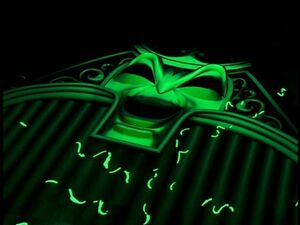 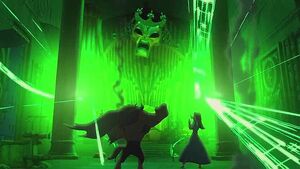 Forte about to fall to his death.
Add a photo to this gallery 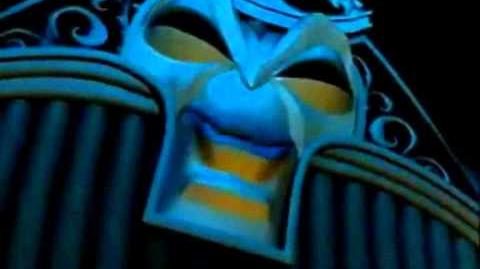 Beauty and The Beast The Enchanted Christmas - Maestro Forte destroys the castle-0
Forte destroying the Castle and his demise.
Add a photo to this gallery

Retrieved from "https://villains.fandom.com/wiki/Maestro_Forte?oldid=2529917"
Community content is available under CC-BY-SA unless otherwise noted.