Maeve, also known by her title Maeve of Blades, is a playable antagonist in Paladins. She is a Flank champion that was introduced on February 8th, 2017.

She is voiced by Jad Saxton.

"After making a name for herself as a skilled thief and knife-fighter, the half-tigron Maeve decided to join the war for personal gain, selling her services to the highest bidder. She dashes from shadow to shadow with unnatural agility, concealed by her magical longcoat — a souvenir from one of her most daring burglaries: the Magistrate's fortress keep.

While her employers find her talents useful, they often complain of suspiciously-misplaced valuables and lost coins after she moves on to the next fight."

A half-tigron half-human hybrid, Maeve uses her enhanced tigron abilities to sneak and steal at her leisure, coupled with her magical longcoat seemingly allowing her to blind others, all make Maeve an impressively skilled thief. During the Crystal War, she has been occasionally employed by both the Magistrate and Resistance to temporarily aid their causes.

Though a thief, she doesn't appear fond of Zhin or the Thousand Hands.

While skilled and available for hire, Maeve is not trustworthy or honorable at all, which she acknowledges herself; even the people who hire her often find their belongings missing. However, despite this, she can be a team player when the situation calls for it, working well with her team during matches, encouraging others not to give up when things go bad, even if she's constantly on the lookout for things to steal.

However, Maeve does also have a bit of a cruel side, with most direct taunts being mocking insults.

Being half-tigron, Maeve has some catlike tendencies as well, such as a fondness of yarn and a disdain for bells.

A skilled thief and knife-fighter, Maeve's natural talent is further enhanced by her tigron side, granting her unnatural agility allowing her to move from shadow to shadow with ease. Coupled with her magical longcoat capable of blinding others, Maeve is a skilled thief few can hope to catch should she decide you're her next target.

On top of her high speed, Maeve has the ability to double jump.

As with every other champion in Paladins, Maeve has a number of different talents and cards which can significantly alter her playstyle. Cards can be upgraded with a limited pool of fifteen points per load-out in order to increase their effectiveness. Numbers in curly brackets are the default values and can be upgraded a total of five times, each upgrade adding another instance of the base value to overall effectiveness. 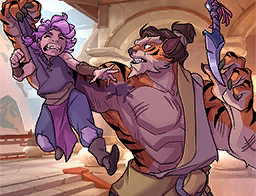