Enforce the rule of the A.A.H.W.

Kill Hank and anyone else who opposes the A.A.H.W.

The Mag Agents are A.A.H.W. agents that have been empowered to many times their normal size (about 4 times the size of a normal Madness character). They are recurring enemies in the Madness Combat flash series.

Mag Agent Torture was the first Mag Agent to seen in the series. He has been apparently tortured and/or altered to look the way he does. There are two spikes going through Torture's head in an "X" pattern, but despite the bloody appearance of his wounds, they do not seem to hurt or even negatively affect him. These spikes are also seen hanging 1337 agents who revolted against the Auditor on the walls. Other notable aspects of his appearance are his clawed fingers and a Mossberg 500 scaled up to his size.

Mag Agent Torture attacked Hank in Madness Combat 7, punching a hole through the floor and firing at him with his large Mossberg 500. Hank dodged the shots but shattered his sword in the process and leapt down through the hole in the floor where he confronted Torture. The two exchanged gunfire with Hank succeeding in shooting the Mag Agent a few times but was eventually smacked away with Torture's shotgun golf style. After Hank landed a training instructor and killed a few agents, Torture loaded a 20 kg slug into his gun and fired it across the valley at Hank. However he hit someone else, while the unharmed Hank headed inside the new building. Shortly after heading inside, Mag Agent Torture pursued him inside, appeared behind Hank, and attempted to take a swing at him. However Hank drove a chainsaw he had recently acquired into Torture's face, slicing it apart and killing the Mag Agent.

Mag Agent Torture also appeared in the non-canon short entitled incident 011A, on this episode Torture invades an unnafiliated base, and kills every single one of the grunts he finds inside with his bare hands (23 kills in total), eventually he enters what appears to be the boss office, and after slaughtering all of the bodyguards protecting the room he finnaly confronts the boss, a grunt named Rich. Although Rich was way more skilled than any of his employees (using his high agility and dexterity Rich was able to jump onto Torture's head and stab the giant repeatedly) Mag Agent Torture was able to knock down Rich and crush him with a desk. However while the Mag Agent was distracted, a surviving employee entered the room with a grenade launcher (M203) and fired at Torture from behind, blowing up the Mag Agent and killing it instantly. The episode ends with the grenadier grunt leaving the room and a janitor getting in clean up the mess.

The Mag Agent V2s were more advanced versions of the Mag Agent design and were improved over the Mag Agent Torture. Two of them served as the Auditor's bodyguards, wearing metal masks with large deformed fangs and they were known simply as Mag Agent V2A and V2B. After Jebus launched his assault on the Auditor's lair, one of them sent a message to their master to tell him what their former ally was up to. After Jebus killed a group of 1337 agents, the first of the Mag Agent V2s jumped out of a hole in the roof and began shooting at the intruder with his gigantic Deagle. But Jebus used his powers to reflect one of the bullets back at Mag Agent, killing him. The second V2 appeared later on and began throwing everything he could get his hands on at Jebus. However Jebus dodged the projectiles while reassembling his sniper rifle, by the time Mag Agent V2 had pulled out his Walther PPK, Jebus was already firing his Tac-50 rifle, eventually the Agent collapsed to the ground and was quickly finished off by Jebus.

A single Mag Agent V2 appeared in the non-canon episode entitled: Incident 001a, Hank is raiding an A.A.H.W base and easily kills all the agents he encounters, until he finds a giant blender inside one of the rooms, he turns it on and decides to throw all of his foes inside said blender (why?) while Hank is dumping dead agents into the blender a V2 enters the room and attacks him, they have a short but intense fight, that is until Hank decides to also throw the Mag Agent V2 into the blender, and he somehow suceeds in doing so. The episode ends with Hank filling the up blender and being apparently satisfied with the bloodshed.

The Mag Agent V3 was still in development before the Auditor activated him prematurely with his new powers, giving Mag Agent V3 the ability to create weapons and generating red veins on his head. Mag V3 wore an oxygen mask, most likely because he had still been in development and couldn't breath fine on his own yet. The Mag Agent V3 accompanied the Auditor to confront Sanford and Hank, but was strangely felled more easily than his predecessors, most likely due to his premature awakening and after being stabbed through the face by Hank's new tentacle claw he fell off a cliff.

The Mag Agent V4s were the latest Mag Agent version to appear in a canon episode so far. These Mag Agents and wear suits like that of the 1337 crew, similar to the Torture and V2 designs. However this version wears a red visor instead of sunglasses or a mask. Two of these Mag Agents were seen on Madness Combat10: Abrogation, the first one engaged Hank and Sanford, succeeding in hitting Hank a few times before smashing him into a wall. Sanford attempted to damage the V4 but an A.T.P Engineer took Sanford out of the fight by damaging the protagonist's most powerful weapon (Hook). Eventually Hank managed to free himself from the Mag Agent's grasp on his own and charged up energy he gotten from coming into contact with Jebus' halo. With this empowerment, Hank killed the Mag Agent V4 with a eletrified punch to his head and another to his body. Later on, a second V4 engaged Hank and Sanford on top of the structure that the Auditor had summoned. This V4 drew a large 1911A1, but was easily killed by Hank, who unleashed a barrage of gunfire from a M-249 on him.

Another Mag Agent V4 would appear in the non-canon episode entitled Incident 010A, during Hank's raid on a A.A.H.W base Hank easily killed all the agents who stood on his way, with the V4 being the last guard to arrive. Using his sword and superior combat skills Hank was able to make several cuts on the Mag Agent's body and eventually stab V4 in the forehead, however at this moment the Mag agent was able to punch Hank knock him down, when Hank got up and tried to jump into the V4's head to retrieve his sword, the Mag agent grabbed him mid-air and ripped Hank in half. The episode ends with the V4 pulling out Hank's sword out of his skull and stabbing Hank's corpse repeatedly, possibly out of spite.

The Mag Agent V5 is the fifth version of Mag Agent to appear in the series. Unlike the previous 4 Mag agents, this Mag agent is heavily armored. It only appeared in a non-canon episode, Incident: 110A.

While Jebus is killing dozens of A.A.H.W troops, V5 arrives and attacks the protagonist, Jebus soon finds out that the Mag Agent is virtually immune to small arms fire, so Jebus strikes the Mag Agent's face repeatedly with the Binary sword, and although his legendary sword wasn't able to go through the Agent's armor, he eventually knocks off V5's googles leaving enough space for him to shoot through and temporarily blind the V5.

However the Mag Agent is able to punch Jebus off the platform, Jebus gets up and kill several A.A.H.W members, shortly after V5 returns and strikes Jebus again, Using the Binary sword once more an enraged Jebus forcefully removes the Mag Agent's helmet, cuts the V5's skull open and using his telekinetic powers he rips off the giant's brain, resulting in a quick but painful death for the Mag Agent V5.

Mag Agent: N is a Nexus version of the Mag Agent and the final boss of Episode 1 of Madness: Project Nexus.

Mag Agent: N can fire bullets that penetrate the player's TAC-Bar. In order to defeat him, Hank, Sanford and Deimos must damage him as much as possible until N falls to the floor.

Upon falling to the floor, N's second phase begins. The Mag Agent will still try to shoot at Hank, Sanford and Deimos, but with less accuracy. He will also be unable to move around, making it is easier to attack him. When he is defeated, N falls to the floor and dies, concluding the first episode.

Mag Agent: Gestalt is an armored mag agent version of the Abomination and a boss in Episode 1.5 of Madness: Project Nexus, appearing at the end of level [1.5-C]. He also appears as the secondary antagonist of Madness: Project Nexus 2, as Phobos' vessel. In the first game, His body is covered by bulky armor and has most of his muscle exposed, with his skin only remaining on his hands and face. It's name means "form" or "figure" in German.

Gestalt does not carry any weapons and fights using punches or by body slamming his foes. He is assisted by other abominations in the fight and is apparently an enemy to the 1337 agents. Like Mag Agent: N, Gestalt is defeated by shooting at him until he collapses. Gestalt's armor can be damaged by firearms and melee attacks alike. When either his body or head armor part is destroyed enough he will be capable of being damaged. Once defeated, the agents and abominations will stop swarming into the room, allowing the player to proceed to the final room of the stage.

Concept art of Mag Agents that may appear in Madness: Project Nexus 2 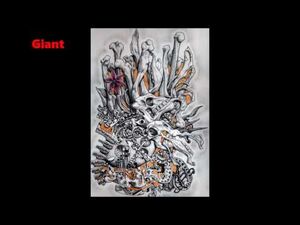