Demon in the Shikon Jewel

Evil spirit within the Shikon Jewel

Dark form
Magatsuhi is the evil half of the Shikon Jewel, born from the evil will of the demon that killed Midoriko, and one of the secondary antagonists of Inuyasha: The Final Act.

He was voiced by Takeshi Kusao in the Japanese version of the anime and Michael Dobson in the English version, the latter of whom also voices Hoshiyomi.

When the Shikon Jewel was created from the souls of Midoriko and the demon she was fighting, this resulted in the creation of Magatsuhi, the evil spirit of the Jewel. It was he who sealed Kagome's spiritual power.

Naraku summoned Magatsuhi from inside the Jewel, giving him a body made from his flesh. Both were united in wanting the Jewel to be corrupted. He first attacked Sesshomaru, who wielded Tenseiga, the only weapon that could kill him, as he is a spirit. He easily corrupted Kohaku's jewel shard. Sesshomaru bit his head off in dog form, but he continued to control the various parts of his body, as any damage to it didn't affect his spirit form. He also further sealed Kagome's power preventing her from purifying Kohaku's jewel shard. During the fight, Sesshomaru was able to put aside his obsession with Tetsusaiga, gaining his own sword, Bakusaiga, which he used to completely destroy Magatsuhi's body. Magatsuhi escaped in his true spiritual form.

While Byakuya tricked Sesshomaru with an illusion of Magatsuhi, the real Magatsuhi possessed Kohaku. Miroku sucked Magatsuhi in with Wind Tunnel (without doing the same to Kohaku), but Magatsuhi survived (in a first for the series) due to receiving infinite power from Kohaku's corrupted Jewel Shard. Miroku was severely poisoned from sucking in his miasma. Still, in Kohaku's body, Magatsuhi injured Sango and made his way to Naraku to give him his jewel shard. During the battle, Kohaku resisted Magatsuhi's possession, and Kikyo's light moved from the Shikon Jewel to Kohaku's shard, driving Magatsuhi out. Sesshomaru slashed him with Tenseiga, supposedly killing him, though his voice could be heard swearing revenge.

Magatsuhi survived due to part of him being inside Miroku. He left Miroku to possess Rin, and went to Naraku, who absorbed the completed Shikon Jewel to transform into a giant spider, with Rin inside him. At some time Magatsuhi left Rin but continued to stay with her. When Rin met up with Inuyasha, who had been turned into his demon form by the corrupted Shikon Jewel, Magatsuhi possessed Inuyasha and fought Sesshomaru. Through his love for Kagome, Inuyasha resisted his possession. Magatsuhi started to possess Kagome, but Inuyasha's dragon-scaled Tetsusaiga kept Magatsuhi frozen in place unable to possess anyone, and Sesshomaru slashed him with Tenseiga, destroying him for good.

His death broke the seal over Kagome, and allowed the light to return to the Shikon Jewel.

His incorporeal form is that of a disembodied pale face with red eyes and sclera and blue stripes on his cheeks. When he manifested in the living world through Naraku's flesh, he assumed the form of an adult male with long, shaggy white hair similar to Inuyasha's, smaller facial markings, blue lips, and wore a set of dark armor. His arms were of a pale purple-colored and most of the time, were a set of three sharp tendrils. As the body did not truly belong to him, he could deconstruct it back into the parts he borrowed from Naraku, keeping only the head in its form so he can speak.

As the embodiment of the darkness of the Shikon Jewel and the indirect reason it exists, Magatsuhi is pure evil, perhaps even more so than Naraku himself. Just like his creator, the dragon demon inside the jewel, he views every other single being, living or not, as inferior to him, repeatedly calling Sesshōmaru weak and disliking any comparisons of him to Naraku. He sneers at courage and self-sacrifice, as seen when badly injuring Miroku and Sango, taunting Miroku for absorbing Magatsuhi's deathly poison to save Kohaku from him and sneering that he will die. He is also sadistic, promising Sango he will return her brother as a corpse once he is through with him. 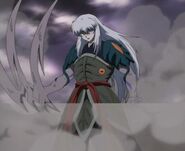 Retrieved from "https://villains.fandom.com/wiki/Magatsuhi?oldid=4004840"
Community content is available under CC-BY-SA unless otherwise noted.