Warden in Impel Down (formerly)

Prevent Luffy's Escape from Impel Down.

Magellan is the former warden, now the vice-warden of Impel Down. Due to his actions he is the main antagonist of the Impel Down Arc. After his failure during the prison escape, he sought to commit suicide which only puts him in the hospital. He is known for eating poison lunches which usually causes him to have diarrhea for the majority of the day.

He is voiced by Mitsuaki Hoshino in the Japanese version of the anime, and Jeremy Inman in the English dubbed version.

Magellan is dedicated to protecting Impel Down and shows pride in being a top prison guard. Unlike Shiliew who was very corrupt and cared little about the lives of the prisoners, Magellan cared about the prisoners safety. However, when the prisoners get out of hand, he would take it upon himself to kill them himself through his poison without any warning. Magellan, however, does not care about the conditions the prisoners are put through as they are tortured in every level of Impel Down. Magellan takes his job at Impel Down and takes any threats in it seriously.

Magellan ate the Paramecia-type Venom-Venom Fruit which allows him to be secret poison from his own body. With this, he uses this poison to create a huge monster known as the Hydra. Also, anyone who is coated in his poison will only have 24 hours to live as seen with Luffy (though he survives later on).

Magellan has been a prison guard at Impel Down for many years prior to his debut in the Impel Down Arc. He was eventually promoted to Warden of the Prison. At some point, he confronted Head Jailer Shiliew who constantly abused his rank as he would use it to ruthlessly murder many prisoners for his own entertainment. Because of the volume of his offense, Magellan stripped Shiliew of his position as Head Jailer and placed him under arrest. They fought and Shiliew was defeated before he was locked up in level six of Impel Down to be executed for his actions.

After the events at Sabaody Archipelago, Luffy learned that his brother has been sent to Impel Down and is awaiting execution at Marineford. While Luffy was going through each level to get to the level where Ace was at, Magellan learned of Straw Hat's infiltration. In level four, Magellan confronted Luffy and Bentham. He promptly defeated Luffy who was already exhausted from going through all the levels and gravely poisoned him in the process.

Magellan had Luffy sent to Level five for his imprisonment. After the incident, Magellan tries to get things back in order. Unknown to Magellan, Luffy had recovered from his fatal poisoning thanks to Emporio Ivankov. Magellan had his men escort Ace out of the facility but the Blackbeard Pirates had arrived at Impel Down with the intent on recruiting new members. He confronted the Blackbeard Pirates and poisoned them. Magellan tried to also halt all prisoners from exiting Impel Down. He later learned that Bentham has assisted in the prisoners escape by playing the role as an impersonator of Magellan. Infuriated by Bentham's action, Magellan was about to fight him. It is unknown exactly what occurred but Magellan failed to kill his foe. It is implied that he was confronted by Blackbeard Pirates who severely injured Magellan in revenge for poisoning them. Either way Magellan was said to have beaten to near death.

After the events of Marineford, Magellan took responsibility for all the mishaps that occurred with the prisoners escaping from the compound.

After the time skip, it was revealed that Magellan had been demoted an Hannyabal has usurped his position as warden.

He was assigned to guard Donquixote Doflamingo and remained out of sight as the Ex-Shichibukai talked to him from within his cell. 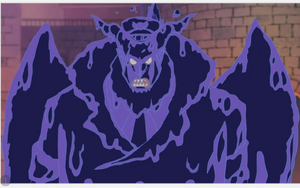 Magellan covering himself with his poisonous powers. 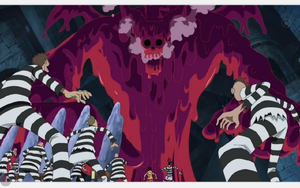 Magellan using his last resort "Venom Demon".
Add a photo to this gallery

Retrieved from "https://villains.fandom.com/wiki/Magellan?oldid=3454262"
Community content is available under CC-BY-SA unless otherwise noted.