NOTE: This article is about the incarnation of Magenta from the Arrowverse. The mainstream version can be found here: Magenta (DC).

Locking Frankie deep inside her and to prove that she is strong.

Frankie Kane, also known as Magenta, is a villain in the third season of The Flash. She is portrayed by Joey King who played young Talia al Ghul.

Frankie was orphaned early in life and was taken in by many foster families. Her most recent father, John, was an abusive monster towards both her and his wife.

With her powers, Frankie severely injures John after he once more abuses her. Energy bolts from a street lantern hit through the window, hitting John. She is brought to the GCPD where she testifies, claiming that John was hit by the lantern pole that crashed into their house. It is revealed that Frankie blacked out during the incident, allowing her split personality Magenta to take over. In the police precinct, Frankie has no memory of what happened and also does not know that she is Magenta.

After she is interviewed by Detective Joe West, Julian Albert heads into the room, asking her whether she wants water. In truth, Albert takes the glass to get her finger prints. From the DNA sample, Albert finds out that Frankie's DNA shares similarities with the DNA of the husks of the other meta-humans found so far. Albert stops Frankie, who was about to leave the precinct, calling her out as a meta-human and blaming her for wanting to kill her foster-father. Magenta takes over, revealing that she wants to do far more than just hurting John and that she will do the same to Albert now. She tries to smash Albert with a metal sign hanging in the precinct. Barry swiftly dons his uniform and saves Albert. He also rushes after Magenta, confronting her outside the precinct. Barry attempts to talk to her, revealing that he knows that she was equipped with powers by Doctor Alchemy. However, Magenta does not listen and uses her powers to lift a nearby police car into the air. Barry speeds to the car, saving the driver, which gives Magenta time to flee.

Magenta heads to the lair of Alchemy, where she reveals that she wants to drive Frankie out of her body to exist entirely as Magenta. However, she senses that Frankie is still inside her body. Alchemy tells her to show John that she is in control now, and that Frankie will know then as well.

Magenta indeed tries to get back at John, trying to smash the hospital he's in by lifting an entire tanker ship from the nearby harbor. Iris West, who has realized that John will be Magenta's target. She also uses her powers to close all doors to prevent anyone from leaving. When Flash creates a wind with his speed to stop the tanker, Magenta realises. However, Barry cannot reach Magenta as he is on top of the hospital roof. Jesse Quick turns up, taking over Flash's position on the roof so that he can take down Magenta. Barry speeds down to the entrance where he manages to talk Magenta out of destroying the hospital. Magenta is driven out of Frankie's body and Frankie breaks down, sorry for her actions. She is comforted by the Flash and then brought to S.T.A.R. Labs. There, she reveals to Barry and his team how Alchemy approached her through her dreams. Afterwards, Barry tells Magenta that Caitlyn found her a foster family in Keystone. 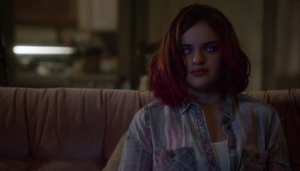 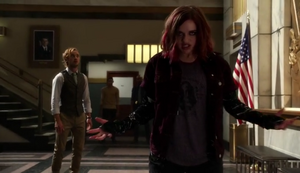 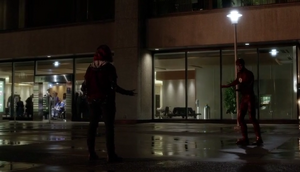 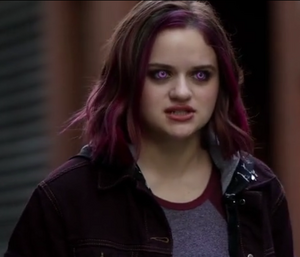