Go back to her home planet with her brother Riff Raff (succeeded).

She is a Transylvanian who is a servant of Frank-N-Furter, along with her brother Riff Raff the latter of whom she conspires with to kill her master and return to their home planet.

Magenta is sitting on the banister of the stairs when Brad and Janet arrive, and when Janet says "Lucky him" referring to Dr. Frank-N-Furter, Magenta sits up and says they are all lucky. She and Riff Raff then begin to sing "Time Warp", with Columbia and the other guests. Later, she and Riff Raff assist Frank when he creates Rocky.

At the end, when Frank, Brad, Janet, Rocky, Dr. Scott and Columbia are all singing, Riff Raff and Magenta crash through the doors, now in more science fiction type clothing. Riff Raff is holding a gun and sings that he is now their commander and they will return to their planet of Transylvania. He tells Magenta to prepare the transit beam and she begins to walk out but Frank stops them. Frank says he can explain and Magenta reenters the room and smiles. Frank then sings that he wants to stay, but Riff Raff explains that he meant that only he and Magenta will return home and that Frank is going to remain on Earth, but only as a spirit, meaning he plans to kill him. Columbia screams and he shoots her dead with the antimatter-laser he's got. He finally kills Frank with the weapon and also kills Rocky. Janet and the others are horrified and then Magenta speaks up, saying she thought Riff Raff liked them and that they liked him. But Riff Raff screams that they never liked him. Then, he tells Janet, Brad and Dr. Scott to leave. Magenta then laughs dementedly and Riff Raff tells her that soon they will return to their home planet. Magenta becomes happily emotional and then they begin to sing "Time Warp". Magenta says "and our world, will do the Time Warp, again!". The house then lifts up off the ground and flies away back to Transylvania. 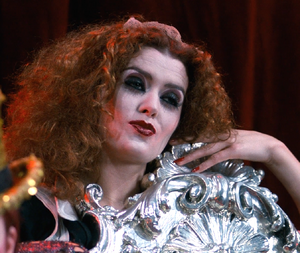 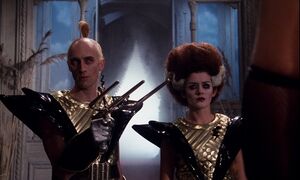 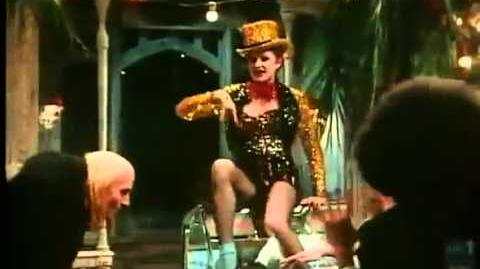