Global, though mainly in the United States, Maggia Gambling Ship

Comprised of multiple independent "families" that operate in various locations

Is affiliated with other criminal groups
Have access to robots called Dreadnoughts
Use a large gambling ship that operates for a sea-going headquarters for part of their criminal organization, the Big M (Giuletta Nefara aka Madame Masque)

Continue their criminal activities around the world.

Eliminate anyone that gets in their way.

Mobsters
The Maggia are an international crime syndicate in the Marvel Comics universe. They are enemies of multiple superheroes such as Spider-Man, Captain America, the Avengers, the Fantastic Four, Iron Man and Daredevil. Their criminal activities have also brought them into conflict with S.H.I.E.L.D. The Maggia continue to commit crimes around the world for their own ends and preserve their influence. However, unlike other criminal organizations, such as HYDRA and A.I.M., the Maggia do not involve themselves with any subversive activities.

The Maggia originated in southern Europe. There, the criminal organization spread throughout non-Communist Europe and the Americas. Its presence in the United States first came to public attention in the 1890s, and the Maggia's widespread bootlegging of illegal liquor during the Prohibition Era has become legendary. Today the Maggia controls most of the illegal gambling, loan-sharking, and narcotics trade in the United States, as well as many legal gambling casinos in Atlantic City, New Jersey and Las Vegas, Nevada.

It also has great influence within various labor unions, and controls politicians on every level of government. Especially in recent years, the Maggia has invested many of its illegal gains into legitimate businesses. However, the Maggia enforces a strict code of secrecy among its members, and does not hesitate to punish betrayals and failures with death. Often the Maggia marks one of its members for execution by having a Maggioso grasp the intended victim by the chin in the so-called "Maggia touch."

The Maggia is not a monolithic organization but is instead a coalition of many virtually independent groups known as "families." The leading members of each family are usually connected through familial or marital ties. The Maggia also has affiliations with other criminal groups such as the Morgan organization in New York City's Harlem.

With Bruno Karnelli's horrible leadership, the loss of Silvermane, and Hammerhead siding with Mister Negative, the Maggia is thrown into chaos until Mysterio appears and uses robot duplicates of the dead Maggia members. When both Hawkeyes, Kate Bishop and Clint Barton, attempted to make a difference in the lives of everyday people by fighting organized crime, several New York crime families, including the Maggia, struck back against them. During the Infinity storyline, it was revealed that the Nobili Family are members of the Maggia where some of its members turned out to be descendants of some Inhumans.

There are several "families" that are based in the New York City area. These three families are the most well known.

Its leader is Silvio "Silvermane" Manfredi, one of the last of the legendary gangsters who came to notoriety during the 1920s and 1930s. This group conducts its activities along traditional Maggia lines, and is heavily involved with the narcotics trade. Silvermane uses unusual scientific means only for the personal goal of staving off his own death, and not for the family's activities. Although Silvermane has a son, Joseph, also known as Blackwing, his successor as family head will probably be his longtime rival, top Maggia lawyer Caesar "Big C" Cicero. Silvermane initially retained control of his organization after being turned into a cyborg, but most recently his failing health, in both human and cyborg bodies, have left him a figurehead leader at best.

The following characters have been members of the Maggia's Silvermane family:

Rapier - A one-time employee of Silvermane. First appeared in The Spectacular Spider-Man Annual #2. Killed by Scourge of the Underworld.

Dominated by middle-aged Maggia traditionalists, this family first became notorious under unusual circumstances. Perhaps in imitation of the Nefaria family, its leader, known as the "Top Man," outfitted his family hit men with costumes and advanced weaponry. He then gained ownership of the Baxter Building through questionable means, thinking that doing so would somehow give him legal title to the technology of the building's famed occupants, the Fantastic Four. The Fantastic Four defeated and captured the "Top Man," his claims to owning the Baxter Building were dismissed by the courts, and the "Top Man" was reportedly assassinated by order of his own family. The family then sought a new leader who would direct operations along thoroughly traditional lines, and chose a newcomer known only as Hammerhead, an amnesia victim whose new ruthless persona had been shaped by his love for gangster films. Hammerhead uses methods from the Prohibition Era, including gang wars, although he will use advanced technology for personal ends, such as the exoskeleton that magnifies his strength. In light of Hammerhead's recent loyalty shift to Mister Negative, the status of his Maggia family remains undetermined.

The following characters have been members of the Maggia's Hammerhead family:

Gimlet - The Top Man's lieutenant who aspired to become the next Top Man. First appeared in Fantastic Four #101 (Aug 1970).

This group bears little resemblance to the rest of the Maggia. The Italian nobleman, Count Luchino Nefaria, a scientific genius, was the world's most powerful Maggia leader until his initial defeat by the Avengers. Afterwards he moved his base of operations to the New York City area, and then imprisoned Washington, D.C. within an impenetrable force-dome and held it for ransom. After his defeat and capture, his daughter Giulietta, also known as Whitney Frost, succeeded him as family head and led an unsuccessful attempt to capture the advanced weaponry of Tony Stark. She was eventually succeeded by a costumed criminal, the Masked Marauder, who demanded complete control of New York City or else he would detonate a nuclear device there. After his capture, the family again apparently came under control of Whitney Frost, by then known as Madame Masque. Contrary to standard Maggia practice, the Nefaria family, principally consisting of men under 40, has employed futuristic weaponry and even robots (like the Dreadnoughts), as well as costumed super-powered agents (Unicorn, Whiplash, Gladiator, etc.), and has launched open attacks on society. Its leader is always known as "Big M." With both Count Nefaria and Madame Masque now pursuing separate agendas, it is not known who, if anyone, currently heads the Nefaria Family.

The following characters have been members of the Maggia's Nefaria family: Count Nefaria - Founder of the Nefaria family. First appeared in Avengers #13 (Feb. 1965).

Tri-Man - An android created by Masked Marauder that copies the abilities of three low-level crooks. First appeared in Daredevil #22.

The Costa Family is associated with the Maggia and was responsible for the death of Frank Castle's family which led to Frank becoming Punisher. At one point, they used Billy "the Beaut" Russo (aka Jigsaw) as an enforcer and hitman.

The Nobili Family is a struggling Maggia family and have been fighting against other crime families, including the Paguro Family. It turns out that some of the members of the Nobili Family are descendants of some Inhumans.

The following members are seen in the Nobili Family:

Carmen Nobili - The son of Gordon Nobili. First appeared in Thunderbolts Vol. 2 #14. Killed during the fight against the Paguro Family even when the Thunderbolts interfered.

Joseph Nobili - The son of Gordon Nobili. First appeared in Thunderbolts Vol. 2 #14. Killed during the fight against the Paguro Family even when the Thunderbolts interfered.

The following members do not fall under the category of the other five Maggia families:

Bobby Peculo - First appeared in Punisher: No Escape #1. Killed by the Punisher.

Bushmaster - First appeared in Iron Fist #15. He was killed when the process that gave Luke Cage his powers proved too much for him.

Cyclone (Fresson) - He served as a speaker for the European branches of the Maggia. First appeared in Thunderbolts #3.

Nautilus - An enforcer from Chicago. First appeared in Spider-Man Unlimited #6.

Razorwind - An enforcer from Chicago. First appeared in Spider-Man Unlimited #6.

Shigeru Ichihara - A Maggia member who handled all Maggia activities on the Pacific Rim. First appeared in Avengers Vol. 3 #31.

Trapster - First appeared in Fantastic Four #38. He was a member of the Maggia in Thing #4.

Vincent Mangaro - A crime boss who set up a drug-dealing operation in New York. First appeared in Punisher: No Escape #1. Killed by the Punisher.

Various criminals have attempted to unify the American East Coast's independent criminal groups so as to compete with the Maggia domination of organized crime. Other lesser criminal organizations may in fact cooperate and work for Maggia, pay street taxes, or manage to operate under the radar of Maggia.

The most successful competitor of Maggia has been the Kingpin, who at his peak was more powerful than all the Maggia families combined.

As noted above, the principal leaders of all three major Maggia families are, to one extent or another, no longer in ideal leadership positions. With the Kingpin presently exiled from the USA in the wake of Daredevil story arcs, the potential for a power vacuum is huge, and the stage is set for a gang war between any and all challengers.

Spider-Man villain called Mister Negative plotted to target the Maggia Families, perhaps hoping to take the Kingpin's place. The supervillain Hood has also formed a supervillain crime syndicate which enlists various costumed criminals in an attempt to gain control of the underworld.

Other lesser crime bosses include Slug (a Miami-based drug kingpin) and the Owl. Whether they are connected to Maggia or manage to operate separately is unknown. Don Fortunato once managed to gain control of much of New York City's underworld in the absence of the Kingpin. Although Fortunato seems to run a traditional Mafioso organized crime group, he is actually connected to the Maggia and the terrorist organization known as HYDRA. The original Mr. Fish was mentioned to have planned to start a Maggia branch in his area.

In the House of M reality, the Maggia is a criminal organization that was led by Count Nefaria. The Maggia were annihilated by Magneto's Sentinels for plotting against him. 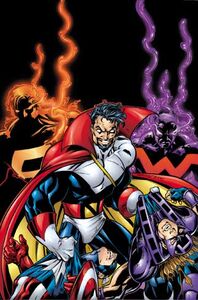 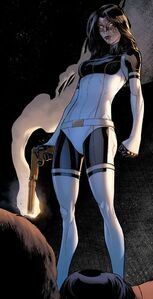 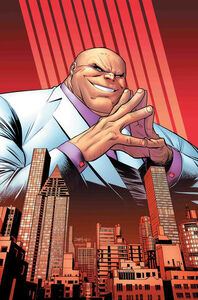 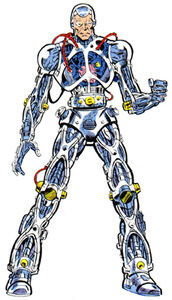 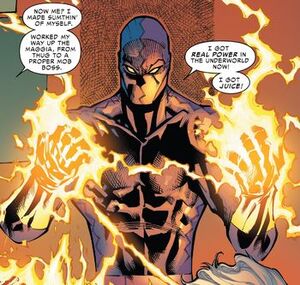 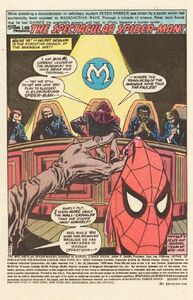 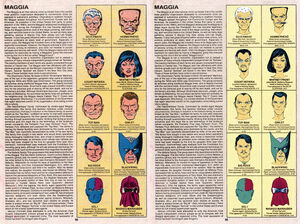 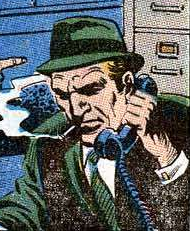 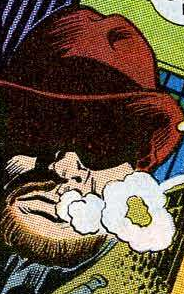 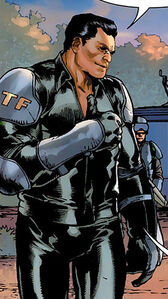 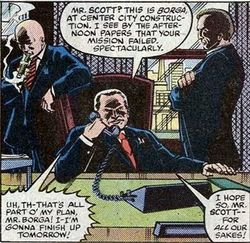 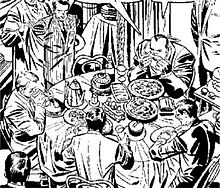