To become the new ruler of mars (failed initially, succeeded ultimately).
To save his brother Grob Gob Glob Grod (succeeded).

Magic Man is a major antagonist in the Cartoon Network series, Adventure Time. He is a Martian who was banished to Earth 200 years prior to the series. He loves to use his magic to make people miserable, mainly Finn and Jake.

Magic Man makes his first appearance in the episode "Freak City", in this episode Magic Man poses as a homeless man who's begging for some food, so when Finn and Jake pass by Finn gives him a sugar cube he found in his backpack and the homeless man reveals that he is actually a Magic Man and he has decided to do them a magical favor. He starts off by showing Finn and Jake some magic, but the type of magic he shows them totally freaks out Jake. He then decides to transform Finn into a mutated freak (basically a giant foot), he later disappears leaving behind fireworks spelling out the words "EAT IT." He later reappears and Finn and the other freaks band together to fight him, but they prove to be no match. Magic Man refuses to turn them back to normal until they learn their life lesson. Finn believes finally realizes that the life lesson was about not giving your food to a jerk. Magic Man then claps his hands and they all return to their original forms, he then disappears again through a portal he made.

In the episode "Sons of Mars", Magic Man notices something in the sky, so he transforms a deer into a telescope and sees that his brothers are coming for him, so he runs as fast as he can. Luckily he runs in Finn and Jake, so he decides to shape-shift Jake to look like him and shape-shift so he will look like Jake, thanks to this, Magic Man is able to get away. All Magic Man has to do is wait for Jake to be executed for all his crimes, then he will get his magic back. So he decides to show Finn where he lives, which turns out to be a dirty and abandoned house. He eventually chooses to help Finn after seeing an old picture of his girlfriend Margles, so he shows Finn where his teleporter pad is. After Finn uses it he successfully saves Jake, but not before returning to punch Magic Man in the face.

In the episode "All The Little People", Magic Man is seen spying on Finn and Jake. He slips them a bag containing little dolls of all the people in the land of Ooo, to which he has bestowed sentience upon, he leaves while whispering "I'm not coming back."

In the episode "Time Sandwich", Just before Jake eats his perfect sandwich, Magic Man appears and steals it away. Jake demands his sandwich back, and Magic Man says that he can only get it back by solving his riddle: "When your face shows 7:20, When green leaves turn brown, The only way forward is down. Then, you'll see, the wetter, the better." Jake complains that the "riddle" was more like word play at best, but Magic Man tells him that trying to "come up with something on the spot" is hard before "savoring the moment" and crashing backwards before creating a large bubble-shaped time field around him.

Jake initially thinks that the time bubble froze Magic Man and the sandwich, but Finn tells him he is just moving in "super-slow motion." They eventually learn that being sad was the answer to the riddle, as tears of sadness are the only thing that allow you to move normally in the molasses time bubble. After Jake makes his way to Magic Man, he immediately punches him square in the face, Magic Man is then crushed by Marceline's monster form, and BMO, riding a skateboard, lands on his face. Once he gets his sandwich back he takes the first bite and comments on it saying how it is, "so, so, so good."

In the episode "Food Chain", Magic Man transforms Finn and Jake into birds so they will be able to fully experience the cycle of life, in doing all this Finn and Jake nearly die.

In the episode "Everything's Jake", Magic Man uses a magic syringe to put Jake inside a world where everything is made out of him. Later it's revealed that this world was actually inside his own body.

After Grob Gob Glob Grod's apparent destruction in "Astral Plane," Magic Man attempted to steal his residual powers with help from Betty Grof in "You Forgot Your Floaties." While their minds were connected, Betty experienced the origin of Magic Man's madness/jerkiness, but thanks to a mutated Finn and Jake interrupting the process, Betty wound up receiving Magic Man's powers and madness, leaving Magic Man as "Normal Man."

In "Normal Man," he uses Tiny Manticore to retrieve Glob's floating orb-head from orbit, with plans to retrieve the others and send them back to Mars to rule. After Tiny Manticore rebels, Normal Man seeks Finn and Jake's help for rescuing his brother. In the end, Glob realizes that Normal Man has started to recover from his madness and disrupts the transportation process so that he can go back to being in orbit with the other heads, while Normal Man returns to Mars and begins to try to help rebuild the civilization and make amends for being a jerk.

In "SkyHooks II" It is revealed that Normal man has become the new ruler of Mars and berates Betty for her plans to Time travel.

Magic Man is the kind of person who admits his wrongdoings. He states that he is a kind, gaudy, caring, gleeful, flamboyant, splendiferous, overbright, blithe, ecstatic, and jolly soul who is out to teach a "magical life lesson", that he is a jerk. Magic Man is extremely annoying, vexatious, bothersome, mischievous, obstreperous, and blameworthy, so he enjoys inflicting misery on other people. This is first shown in "Freak City," where he poses as a homeless man to travelers, begging for food. If someone gives anything to him, he does them "a mystical magical favor" by turning them into a mutated freak resembling body parts. Other cases of his pranks include forcing Finn and Jake to experience the food chain by turning them into different organisms, and injecting Jake with a sleep-inducing substance to send him to Jake World.

Magic Man is also very apathetic and emotionless, so he refuses to take responsibility for his actions as seen in "Sons of Mars". When Grob Gob Glob Grod come to arrest him for his past crimes on Mars, Magic Man avoids capture by shapeshifting Jake's body into his own and shapeshifting his own body into Jake's, resulting in the former being taken to Mars. After Finn demands that he take them to Mars, Magic Man takes him to his house. After seeing an old picture of his girlfriend Margles, he decides to help Finn by showing him his machine, which takes him to Mars. After Jake dies, the rest of Magic Man's magic returns to him, and he merely proclaims that he has won.

Magic Man is a mint Martian who wears tattered yellow clothes and a matching yellow wizard hat. He also wears mismatched boots, one purple and the other red. Like the Ice King's eyes, his eyes are white. He also wears a red backpack with orange and green straps; the backpack has a rolled-up pink blanket on top of it. He also has a pouch strapped to his leg. He is one of few characters with a nose.

Magic Man possesses an immense amount of magical power. He has demonstrated the ability to teleport and transform objects and creatures with ease. In "All the Little People", Magic Man reveals that he has the ability to bestow sentience upon inanimate objects as seen by the Little People. Magic Man is also able to create a large time bubble that can slow down movements and sensations as seen in "Time Sandwich".

Despite his abilities, Magic Man never fights or takes aggressive action against his opponents. However, he seems to be adept at defending himself in combat. He protected himself from Gork's lava blasts by conjuring portals and redirecting it behind him. He was also able to quickly recover from being punched and launched a great distance by Zap, making a perfect landing. When he changes the freaks back to normal form he appears to do nothing but lightly clap his hands, suggesting it took little to no effort at all. In light of how carefree he was about the fight, it is likely the Super Freak wasn't really a challenging opponent for him.

Although he prefers to simply tease Finn and Jake, Magic Man could easily become one of the biggest threats the duo have faced, as he seems to leave pure chaos in his wake, not thinking twice about turning Finn into a foot or Jake into himself, along with letting Jake die for his crimes on Mars. 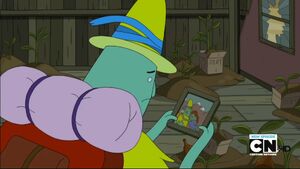 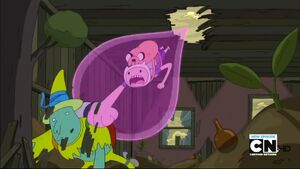 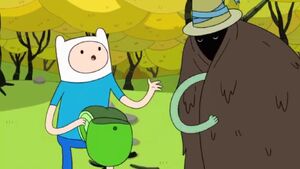 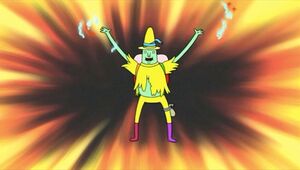 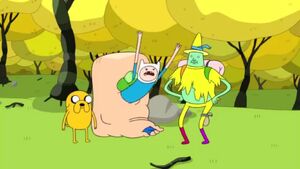 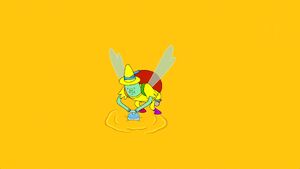 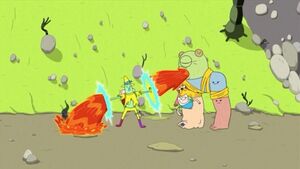 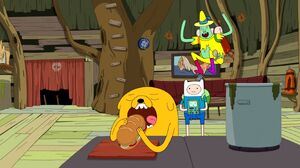 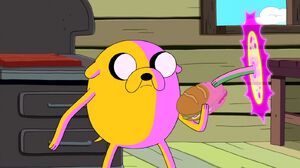 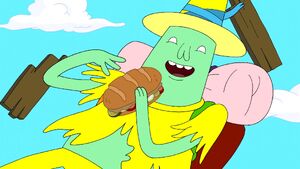 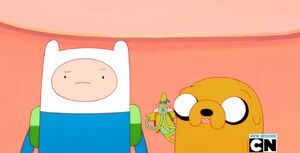 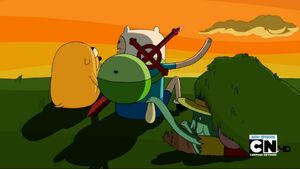 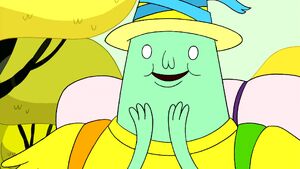 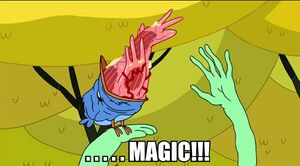 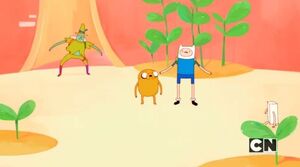 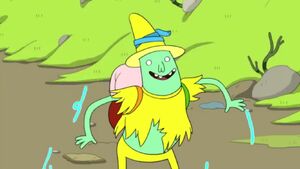 A gif depicting Magic Man fleeing the scene after his first appearance.
Add a photo to this gallery

Retrieved from "https://villains.fandom.com/wiki/Magic_Man_(Adventure_Time)?oldid=3488812"
Community content is available under CC-BY-SA unless otherwise noted.