Magma Dragoon (Magmard Dragoon in Japan) is one of the eight Maverick bosses from the game Mega Man X4.

Magma Dragoon at one point was a member of the Maverick Hunters. He eventually joined Repliforce after the unit was formed. One day, a mysterious man offered him a chance to fight X and Zero should he betray Repliforce. Agreeing to the plan, he attacked the Sky Lagoon, causing it to crash into the city, killing thousands of civilians, resulting in Repliforce being blamed for the incident.

X (or Zero, depending on who the player chose to play as) confronts Magma Dragoon in a volcano, where Magma Dragoon fights by launching fireballs from his hands (shouting "Hadouken" as he does so), breathing a stream of fire from his mouth and raining down meteors. He can also use a fiery uppercut called the Shoryuken. His weakness is the Double Cyclone when playing as X and the Raijingeki when playing as Zero.

Upon being defeated, Magma Dragoon apologizes for what he did and states that he always dreamed of fighting X or Zero and that a "mysterious man" offered him a chance that he could not refuse. 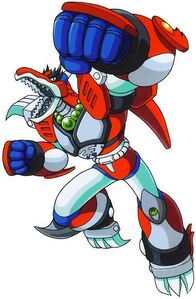