Magna Centipede (Magne Hyakulegger in Japanese) is one of the eight Maverick bosses and a minor antagonist in Mega Man X2. He is a ninja centipede-based Maverick.

While we know nothing of his personality before the Mavericks brainwashed him, Magne is shown to be incredibly violent, slaying all in his way while brainwashed. This put even his own comrades within his vicinity in danger. He is a skilled ninja and very stealthy, being placed in a high-ranking unit.

Magne Hyakulegger has four arms. He has purple armour over a black shirt with long sleeves with pink cuffs, purple shorts, black leggings, and white shoes. His tail is blue.

Magna Centipede was a Maverick Hunter from the Special 0th Unit under Zero, but when Sigma started his rebellion he had Centipede captured and brainwashed to serve him. Magne is then ordered to take over a Computer Center in his brainwashed state, from which he starts to transmit the Sigma Virus around the world to create even more Mavericks to help Sigma. He was eventually confronted and defeated by X.

Magna Centipede will be constantly moving and teleporting around the room, sometimes appearing in the ceiling. He mainly attacks by throwing three shurikens or his Magnet Mine which seeks targets, but he can also attract the player and sting him with his tail, thus disabling one of X's abilities each time. His weakness is the Silk Shot, which breaks his tail thus preventing him from disabling the player. 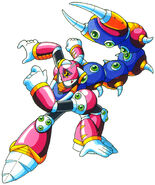