Spending most of their lives pillaging caravans, small towns, and even full-sized cities on the rare occasions

Magnataurs are a monstrous species of giant monster from Warcraft III and World of Warcraft.

While they obviously resemble centaur, dryads and other hybrid races, they do not appear to be descendants of Cenarius. Brann Bronzebeard believes that they are in some way related to one of the Old Gods, but there is little to confirm or dispute this idea.

The overwhelming majority of magnataur are powerful melee fighters, charging into combat and using fear and massive clubs as their only weapons. Still, a few more specialized magnataur exist, including the shamans that often dominate small groups of their kind, and a few rare hunters, scouts and rogues. Regardless of their specialty, magnataur are among the deadliest creatures of Northrend, if not the world in general. They are a dying breed, but their recent desperation leads them to levels of cooperation never before seen, and this could prove disastrous for the other mortal races living on the glacial continent.

Although possess enough intelligence to realize that other creatures can provide food for them, and even a few historical mentions have even been found of magnataur setting up kingdoms and making humans into slave labor to provide them with nourishment, such kingdoms don’t last long: as magnataurs are universally too impatient to deal with such situations.

Strength means everything to magnataurs, and they listen only to those who they feel are strong enough to threaten them. Only the strongest and meanest survive in the herd. A given magnataur largely considers other creatures inferior. This bigotry extends even to magnataurs of different herds. For the most part, a typical magnataur lacks long-term goals, other than to grow more powerful and find ideal supplies of food. Outsiders are generally viewed as food, threats, or providers of food. Magnataurs attack adventurers / outsiders on sight, sparing them only if they realize adventurers / outsiders would potentially have something to offer them — which is a rarity.

For all their bellicose disposition, magnataurs are wise enough to give dragons a wide berth and know that invading territories of dragons can be costly and deadly. Likewise, they avoid the Scourge, for undeads are dangerous (and taste unpleasant mostly). 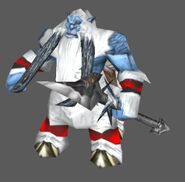 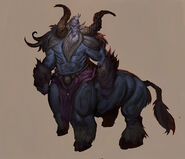